There are 2 members of each court whose judicial output we have yet to survey. Sonya Sotomayor and Elena Kagan of the Supreme Court. Jenny Rivera and Sheila Abdus-Salaam of the New York Court of Appeals. The most recently appointed Justices and Judges.

As mentioned in the last post, there's a wrinkle here. Neither Judge Rivera nor Judge Abdus-Salaam was on the New York court for the entire year. (Recall, we are reviewing summer break 2012 to summer break 2013). Rivera didn't join the court until February. Abdus-Salaam till May.

So for the purposes here, let's combine the records of each of those Judges with the records of their predecessors who sat on the court in the earlier part of the year. Rivera with that of Carmen Ciparick (who left because of mandatory age retirement at the end of 2012). Abdus-Salaam with that of Theodore Jones (who tragically passed away in November 2012).

But even those combinations do not constitute a full year. The Ciparick to Rivera seat was vacant for the Court of Appeals' January session and 1/2 of the February one. The Jones to Abdus-Salaam seat was vacant most of the year--neither Judge participated in decisions of appeals rendered from November through May.

Nevertheless, simply for the sake of completeness, we'll include those combinations in the graphs for this post. But we'll also include the averages for the Court of Appeals as a whole--and for symmetry, that for the Supreme Court as well--to have something meaningful with which to make comparisons.

With the foregoing in mind, let's get going. 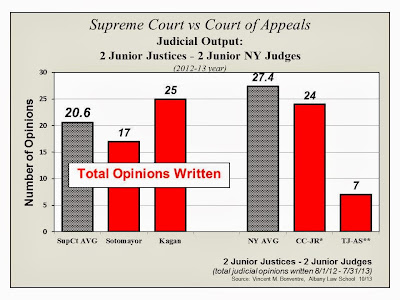 First, remember that the figures for the 2 New York Judges represent less than full years. And yet, the total number of judicial opinions authored by the Ciparick-Rivera seat (24) was still greater than that for Justice Sotomayor (17) and virtually the same as that for Justice Kagan (25).
(The number of total opinions by the Jones-Abdus-Salaam seat represents only 1 and 1/2 months of cases and, consequently, is not really amenable to any meaningful comparisons.)

Regarding that total number of judicial opinions by Justice Kagan, it is very close to the Court of Appeals average (27). In fact, it is greater than the Supreme Court average (~21) which, in turn, is lower than that of the New York court. 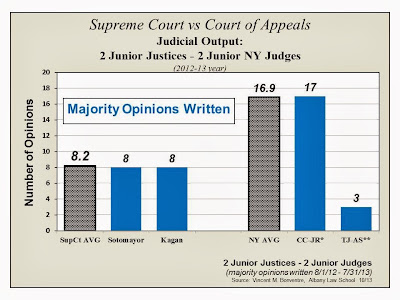 The 7 Supreme Court Justices we've looked at in previous posts each authored 8 or 9 majority opinions. Sotomayor and Kagan were no different. That's half the Court of Appeals average (~17). In fact, it is half the number of majority opinions authored by the less-than-full-year Jones-Rivera seat (17).
(Again, the number for the Jones-Abdus-Salaam seat, representing only 1 and 1/2 months of cases, is not really amenable to any meaningful comparisons.) 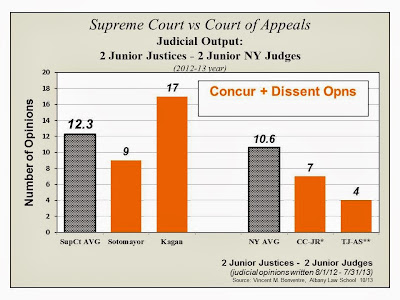 As we've seen in previous posts, the reason the Justices' numbers for total opinions are even close to that for the New York Judges is the separate (non-deciding) opinions. As reflected in Chart 3, Justice Kagan authored (17). That's considerably more concurring + dissenting opinions than the Court of Appeals average (~11)--and it's more than twice as many as the Ciparick-Rivera seat wrote during it's less than full year. Justice Sotomayor wrote almost as many as that New York average.

In short, the 2 Justices wrote far fewer majority (deciding) opinions than did Court of Appeals Judges generally. But, at least regarding Justice Kagan, the reverse is true for separate (non-deciding) ones.

Here's the foregoing data in one chart. 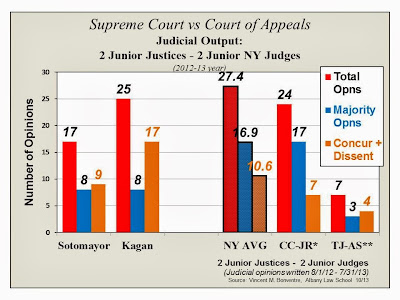 As recapped in Chart 4, Justices Sotomayor and Kagan wrote somewhat fewer total opinions than the Court of Appeals average, but not even half the number of majority (deciding) opinions than the average New York number. In fact, the 2 Justices wrote fewer than half the number of majority opinions that the Ciparick-Rivera seat did in less than a full year. It is only in the separate (non-deciding) opinions--concurrences and dissents--that the judicial output of either one of the 2 Justices exceeds the New York court's average.

In the next post we'll graphically summarize all that we've seen in this series. The entire Supreme Court and the entire New York Court--individually and collectively. And we'll consider some of what the numbers mean.

As a preview, here's a chart recapping the averages for the 2 courts (i.e., total court output divided by total court membership). 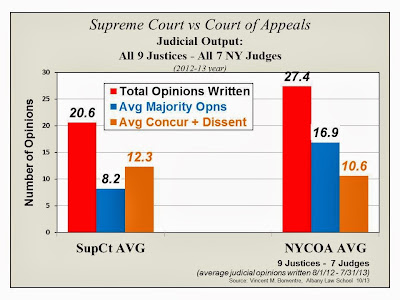