The Nine & The Seven--Graphic Recap (Part 7 of Supremes vs NY Court of Appeals: Judicial Output [with Charts!])

Without delay: the total opinions authored be each Justice and Judge, as well as the average for each court. 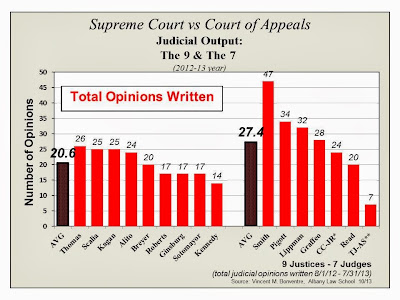 As Chart 1 shows, the average for New York Court of Appeals Judges is higher than the figure for every Supreme Court Justice, including the most prolific.
Also notable, New York's Judge Smith was by far the most prolific of the members of both courts.
Additionally, 4 of the 7 Court of Appeals Judges authored more opinions than any of the 9 Supreme Court Justices.
(N.B., the Ciparick-Rivera seat [CC-JR*] was vacant for 1 1/2 months of cases; the Jones-Abdus-Salaam seat [TJ-AS**] participated in only 1 1/2 of the monthly sessions.)

Now for the majority opinions--the ones that actually decided a case. As we've seen in previous posts, the contrast between courts is even more striking here. 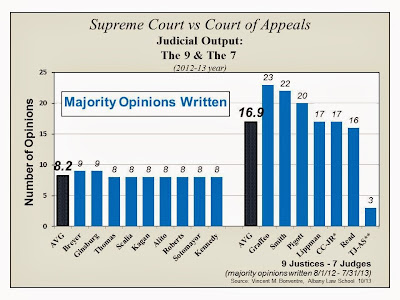 Every one of the Court of Appeals Judges (except for the 1 1/2 month Jones-Abdus-Salaam seat) authored double (or far more than double) the Supreme Court's average number of majority/deciding opinions.
Indeed, every New York Judge (again, with that 1 1/2 month seat exception) authored far more majority/deciding opinions than any of the Justices did.


As for the reason that the total opinion numbers (as seen in Chart 1) for the members of the 2 courts is even close, take a look. 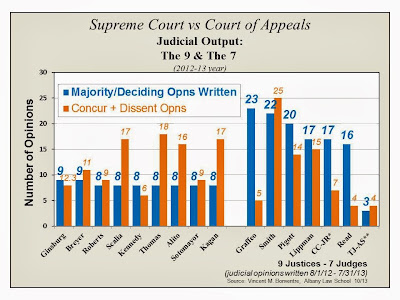 Of the 9 Supreme Court Justices, 4 wrote twice as many separate opinions--i.e., separate concurrences and dissents--as they did majority/deciding opinions. That's Justices Scalia, Thomas, Alito, and Kagan.
At the Court of Appeals, none of the Judges' separate to majority opinion proportion is similarly lopsided. Instead, for Judges Graffeo, Pigott, the Ciparick-Rivera seat, and Read, the proportion is in the opposite direction. Judge Smith did write more separate opinions than majorities, but the difference is slight.

Now, to sum up the foregoing (as well as what we've seen in previous posts comparing the judicial outputs of the Supreme Court and the  Court of Appeals), let's get a clean, uncluttered look at the court averages. 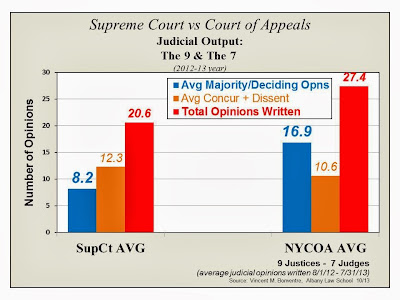 There it is.
The New York Court of Appeals Judges, on average:
double the number of majority/deciding opinions authored as the Supreme Court Justices;
slightly fewer separate opinions;
one third again as many total opinions.

In the next post--the last in this series--we'll take this data and use it to show the total judicial output of the 2 courts. Not for each Justice or Judge. Not averages. But the total decisional work--i.e., deciding cases--of the Supreme Court and the New York Court of Appeals for last year.