Totals for The Nine & The Seven -- the previous year too (Part 8 of Supremes vs NY Court of Appeals: Judicial Output [with Charts!])

As before, let's get right to it. 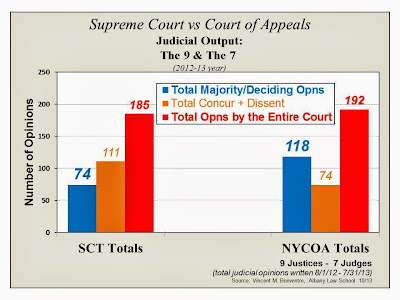 As shown in chart 1, the 7 Judges of the New York Court of Appeals collectively authored more than half-again the number of majority/deciding opinions as did the 9 Justices of the Supreme Court. (118 vs 74--that's 1.6 times as many, to be a bit more precise.)

And yet, the numbers for all opinions (majority/deciding + separate concurring + dissenting) are much closer. (185 vs 192.)
The reason those totals are so much closer? The Supreme Court Justices collectively wrote considerably more separate/non-deciding opinions (concurrences + dissents). (111 vs 74.)

Stated differently: most of the opinions authored by the 7 New York Judges decided cases before that court.
Most of what the 9 Supreme Court Justices wrote were separate statements in concurring and dissenting opinions.

BUT--you might wonder--was last year just an aberration? (Recall that the data thus far discussed, here and in the previous posts in this series, is for the last complete year: summer break 2012 to summer break 2013.)
Well, glad you asked! 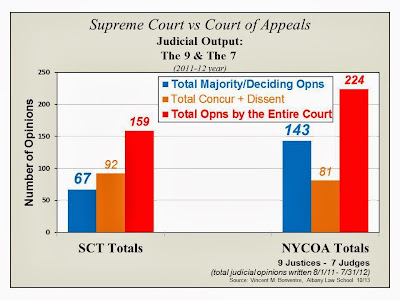 Yes, there is some difference: the total number of majority/deciding opinions by the New York Judges dwarfs the number by the Supreme Court Justices even more than in 2012-13.

So, if anything, the numbers for the previous year underscore the disparity in judicial output between the 2 courts. 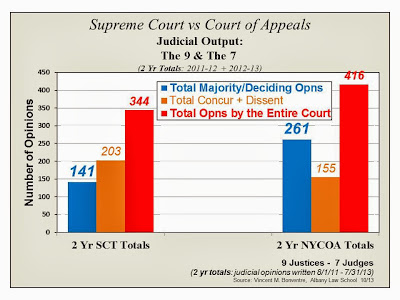 Nothing new. Only re-emphasizes the greater judicial output of the New York court as compared to the Supreme Court.

Finally, let's conclude with what should now be obvious from all that's gone before in this series. Actually, just recapping the foregoing in different terms.
Namely, the contrast between the Supreme Court and the New York Court of Appeals in the number of appeals actually decided each year.
Take a look.
CHART 4 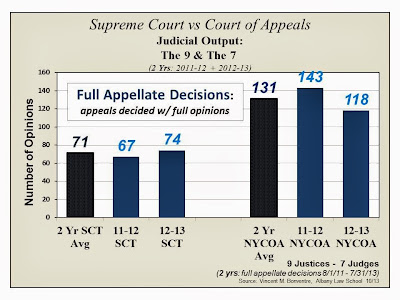 In short, the Supreme Court decides far fewer appeals than does the New York Court of Appeals.

Considering only "full appellate decisions"--i.e., those appeals decided with a full opinion signed by one of the Justices or Judges--the New York court decides almost twice as many cases a year as does the Supreme Court.
[BTW, the contrast would be even greater if the more summary decisions--i.e., those appeals decided with an unsigned memorandum or per curiam opinion--were included. The New York Court decides far more of those as well.]

As shown in chart 4, the 7 New York Judges rendered many more full appellate decisions than did the 9 Supreme Court Justices in each of the past 2 years.
And the averages: 131 for the 7 Judges of the New York Court of Appeals, and 71 for the 9 Justices of the Supreme Court.

To be sure, as stated a number of times throughout this series, there are lots of  "buts" and "ifs" and "yets" and other attempts at explanation that could be offered for the sharp disparity in the judicial outputs of the 2 courts.
What has been presented in this series of posts has only been the data, the facts. And, regardless of anything else, those facts are simply hard to dismiss.

[Disclosure: from what I have studied and observed over the years, I do believe that the New York Court of Appeals is one of the hardest working, efficient, and productive high courts in the nation. I would not rank the Supreme Court as highly under those criteria.]