[Dateline Arizona: Nothing I can say will do it justice.
In the last post, we reviewed Judge Graffeo's free press opinion for the Court of Appeals in M/O Holmes v. Winter. Now we return to the matter of Criminal Leave Applications at the Court.]

We looked at the annual figures and at the averages over several years. It was clear from both that the Court of Appeals under Lipmman has been granting twice as many CLA's as it had been doing previously.

But remember, CLA's s are decided by a single Judge. CLA's are assigned randomly, and the assigned Judge alone decides whether to grant or deny it. So let's look at the number of CLA's being granted by each Judge--before and after Lippman's appointment.

A few months into Lippman's tenure as Chief Judge, we looked at the number of CLA's being granted by the individual Judges in the several years immediately preceding his appointment. Here's a visual of what we found: 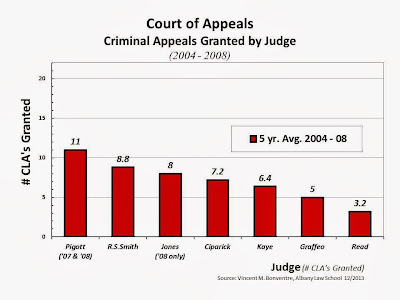 In the final 5 years of the Court under Chief Judge Judith Kaye (2004 thru 2008), the range of CLA grants among the Judges was an annual average of 11 for Eugene Pigott to 3 for Susan Read.
[As indicated in the graph, Judge Pigott's figure reflects his having been on the Court for only the last 2 full years of that period.] 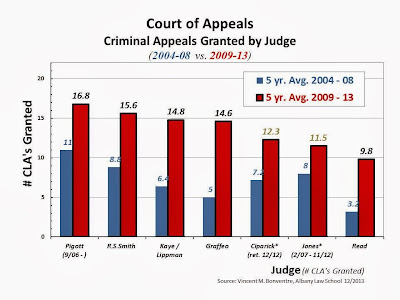 The numbers increased for every Judge. Indeed, the increases have been dramatic.

Speaking again of the Court's spectrum, there's Pigott's annual average of 17 and Read's annual average of 10. Yes, the names at the high and low extremes at the Court (Pigott and Read) are the same as they were for the latter 5 years of the Kaye era. But the numbers are far higher. Instead of 11 to 3, the range under Lippman has climbed to 17 to 10.

In fact, the increases have been significant for every member of the Court. Notably, in the Chief Judge position, Lippman's annual average of nearly 15 is more than double what Kaye's was.
[N.B., as indicated in Part 1, the figures used for 2013 are extrapolations based upon data already available that cover most of the year.]

In our series a few years ago, we had also narrowed the focus to the final 2 years of Kaye's tenure--i.e., the 2 years immediately preceding Lippman's appointment. This is what we found:
GRAPH 3 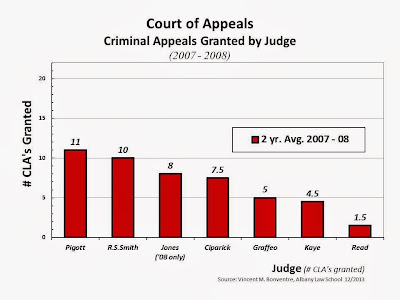 Compare that to the annual averages for the most recent 2 year period, 2012 and 2013, with Lippman as Chief. Here's how the comparison looks:
(click graphs to enlarge)
GRAPH 4 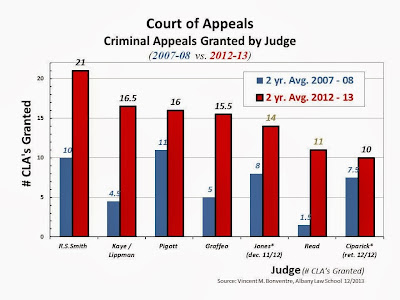 The contrast in the figures is even more striking than it was for the 5-year comparisons. Not only did the number of CLA's granted increase for every member of the Court, and increase significantly. But the numbers more than doubled for 3 of the Judges, as well as for Lippman as compared to Kaye.

Consider the increases at the high and low extremes. That range which was 11 to 1.5 in the last 2 years of the Kaye era rose sharply to 21 to 10. Looked at another way, the high in the last 2 years under Kaye virtually became the low under Lippman.
[N.B., the Court's 2 newest members, Judges Jenny Rivera (replacing Carmen Ciparick) and Sheila Abdus-Salaam (replacing Theodore Jones), are not included in the graph or in the tabulations because neither has yet compiled a meaningful CLA record since being appointed in 2013.)

There is simply no denying that the change in the Court's treatment of applications for review of criminal cases has been remarkable. The complaints of attorneys and commentators that the Court had been extremely stingy in granting CLA's were apparently heard and addressed.

To put it simply, the Judges are now granting criminal appeals in much higher numbers.

In the next post, we'll change the focus a bit. Instead of Lipmman Court compared to Kaye Court. We'll compare the CLA granting record of the individual Judges today under Lippman.