[This series on the Roberts Court's record on racial discrimination will alternate with Saratoga Highlights 2013, which is now in preparation. Yes, about time! But a good time nonetheless.
For now...]
So what is the current Supreme Court's record in cases involving issues of racial discrimination? That is, cases involving claims of unequal treatment on the basis of race?

How has the Court under Chief Justice Roberts been treating claims of race-based discrimination? Claims that some government or private entity has violated constitutional or statutory mandates of equal treatment on the basis of race (or race equivalent ethnicity). Claims that racial equality requires protective measures. Claims that race-based wrongs should be remedied and wrongdoers be penalized. Etc. 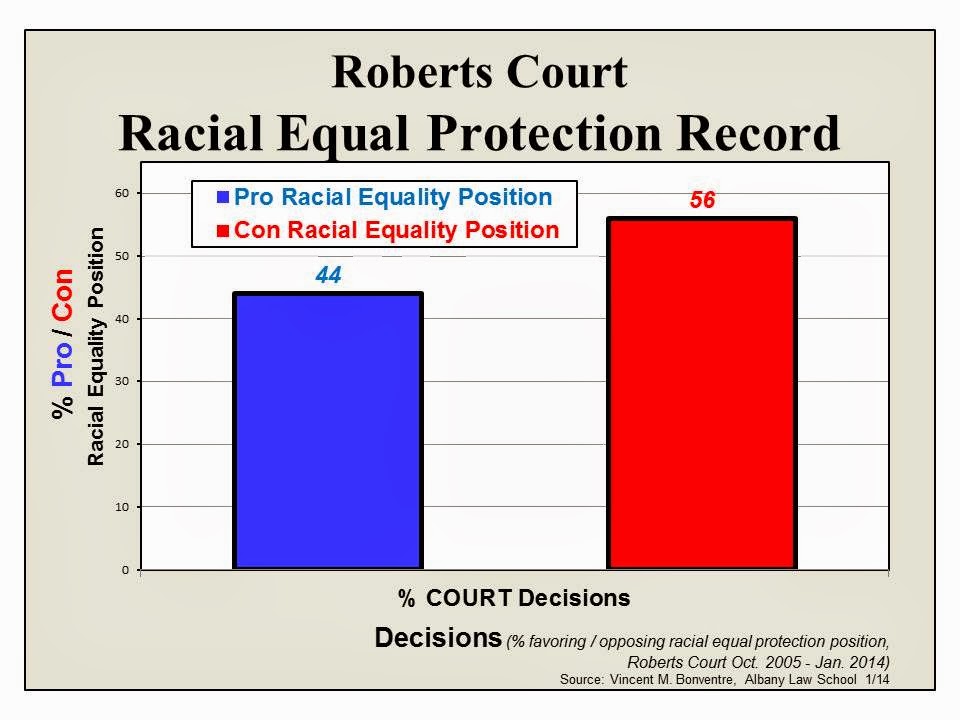 Specifically, graph 1 reflects the Court's record since John Roberts assumed the center seat. He was confirmed as Chief Justice in time to preside over the Court's October 2005 term--i.e., for the 2005-06 Court term. So we're talking about October 2005 to the present.

Stated differently, the Court under Roberts has rejected a majority of the racial equal protection claims it has heard. In 56% of the cases dealing with issues of race, it has sided against the party that sought enforcement of equal protection or that complained about unequal treatment.

There has been a wide variety of such cases before the Roberts Court. Cases dealing with issues critical to the nation's approach to racial equal protection. Issues involving such matters as voting rights, affirmative action in education and employment, race-based gerrymandering, race-based promotions and terminations, race-based jury selection, retaliation against discrimination complainants, etc.

The point? These were important and close cases in which the Court ruled against the racial equality position more times than not.

The point is NOT that the Court's decisions were wrong. Not most of them; not any of them. Not necessarily at all. It is simply that the Court's record in racial equal protection cases--remember, important, close cases--leans somewhat against the vigorous enforcement of equal racial treatment. (We will look more deeply and more precisely into that later.)

Now what about the very closest cases among these? Those cases which not only made their way to the Supreme Court--not only did the Supreme Court think that they were important enough for the nation that they should be decided. But cases in which the Justices could not agree. That is, those cases that resulted in divided decisions. In dissenting opinions. In the Justices taking different sides.

Of the total 18 cases, 12 were very close ones that resulted in divided decisions. What's the Court's record on them?
GRAPH 2 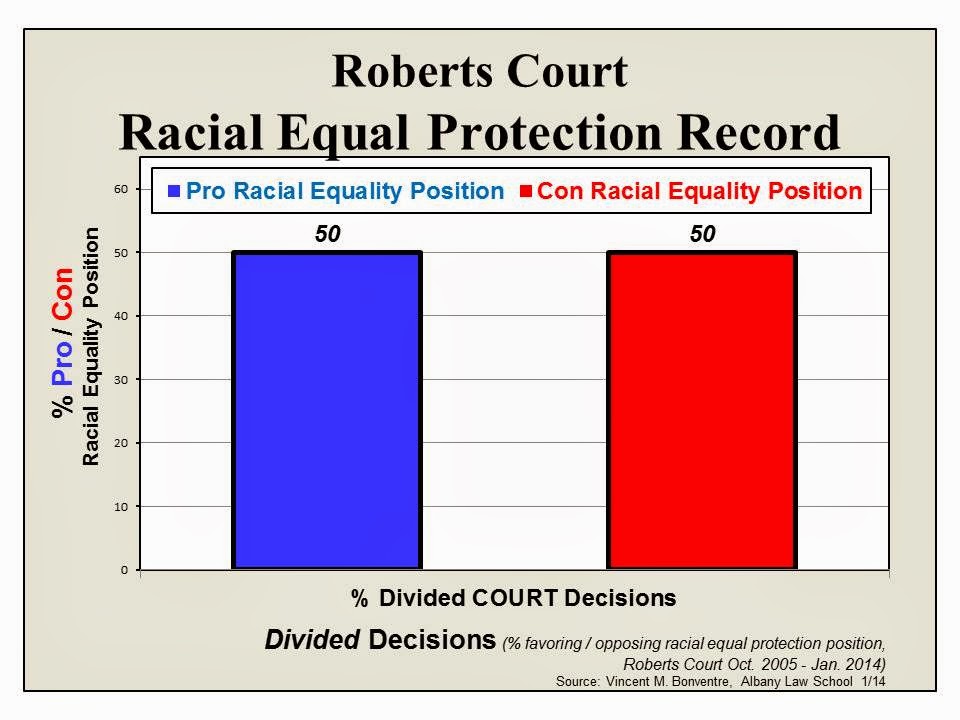 Hmm. Does this tell us anything?

Well, at the least, it tells us that the Court has not been particularly zealous in either direction. It has neither been a mighty champion of racial equality, nor an intransigent enemy.

As noted above, we will look--and need to look--more deeply and more precisely at these figures. In order to understand them, we must look behind them, and underneath them.