In part 1 of this series we took a general look at the Supreme Court's recent record on racial discrimination issues. We saw that, since John Roberts became Chief Justice in 2005, the Court has sided with and against the racial equality position in basically an even number of cases.

But what is behind those even numbers? Yes, favoring the racial equality position about half the time. But racial equality for whom? Meaning, protection from racial discrimination for whom?

Asking this somewhat differently: when the Roberts Court has applied the constitutional guarantee of equal protection and the civil rights laws, has it been doing so to provide protection or to deny it? And more specifically, to provide or deny protection to racial minorities?

Let's take a closer look at the Court's record. What do those even numbers--that basically 50-50 decisional record in racial discrimination cases--actually represent? In short, how often has the Court ruled in favor racial minorities or the position advocated on their behalf? Take a look. 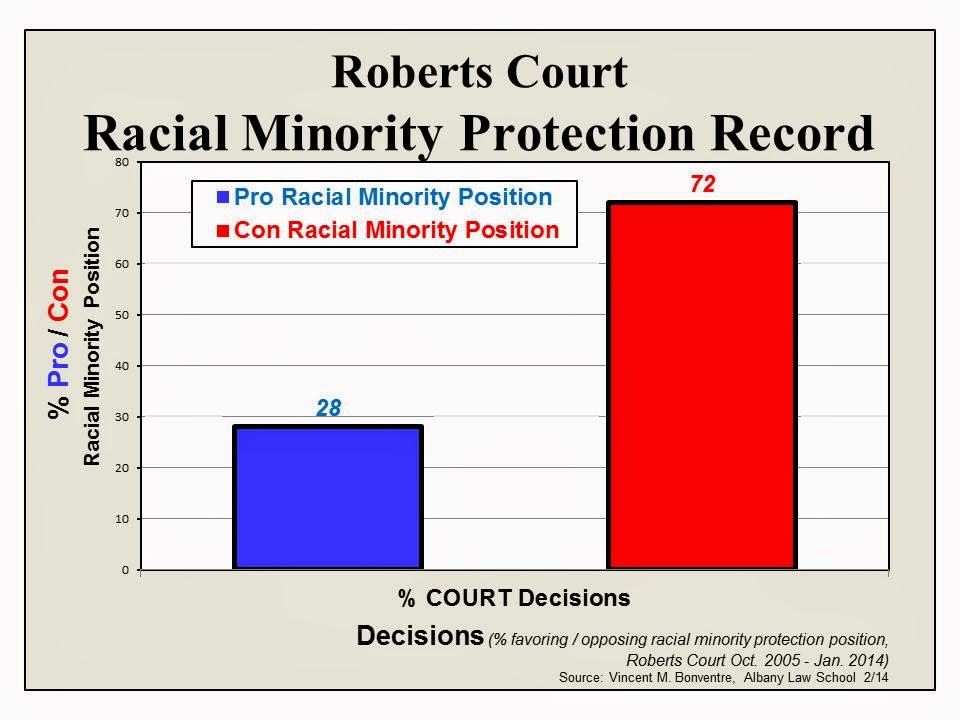 Well, that's quite different than the Court's more general 50-50 record (again, that we saw in part 1). As compared to the population generally, racial minorities have not fared quite so well in racial discrimination cases. No they have not.

In contrast to the Court's more general 50-50 record, racial minorities have lost in 72% of the cases involving issues of racial discrimination. That's more than twice as often as they have succeeded.

Now suppose we turn our attention, as we've done before, to the divided decisions. Those 12 cases, among the 18 total, in which the Justices could not agree. Those very close cases in which some of the Justices dissented from the Court's decision.

Here's the Court's record in those cases. 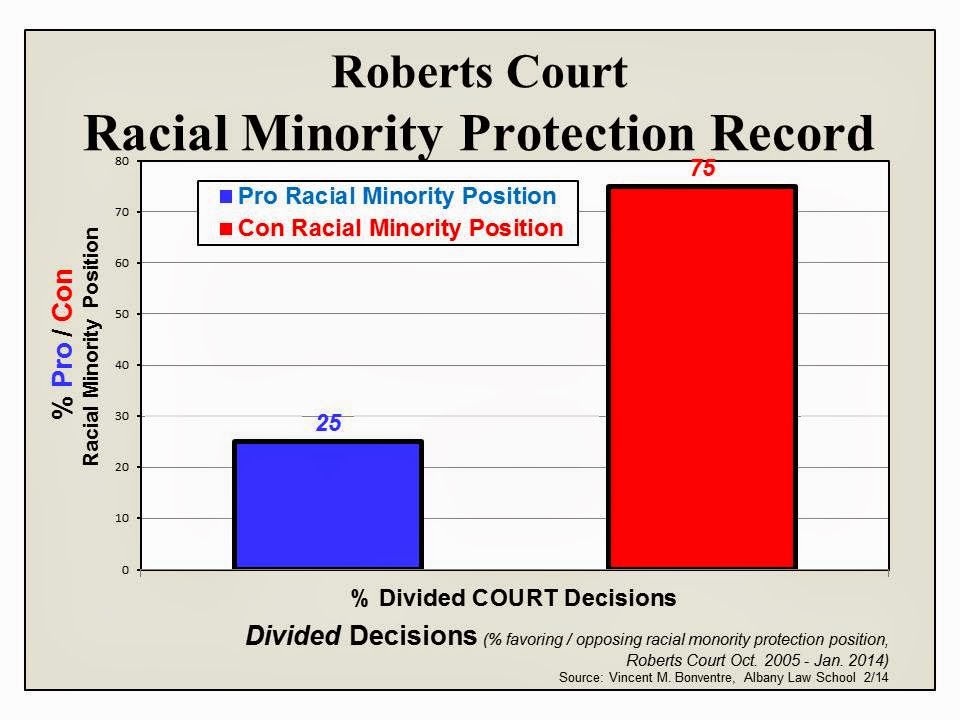 It's virtually the same. (Insignificantly worse.) But--perhaps because one number is an immediately recognizable multiple of the other--the numbers seem even more stark.

Whatever else the Court's general 50-50 record in racial discrimination cases may be, it is manifestly NOT a record of looking out for racial minorities. Looking behind that record, we see that the Court opposed the position to protect racial minorities 3 times as often as it adopted such a position. Yes, 3 to 1 against positions advocated on behalf of racial minorities.

Let's be clear. In cases in which the Court had to apply and enforce constitutional equal protection and civil rights laws, it did so to reject the pro racial minority position 3 times as often as not.

For now, let's just put aside the merits or fault of such a 3-1 record. Whatever else can be said about that record, it certainly CANNOT be argued that the Court has been vigorously enforcing the historical purpose of constitutional equal protection (the 14th Amendment) or the civil rights law--i.e., to protect racial minorities from suffering discrimination at the hands of the majority. No, NOT a strong record in THAT sense at all.

OK, let's not mince words. A terribly weak record in THAT sense.
[Non-surprising disclosure: I think it's a terrible record period.]

Think of it this way. Only 1/4 of the cases. Only 1/4 of the cases that were important and close enough to get to the Supreme Court. More than that, important and close enough that some of the Justices openly expressed their disagreement with the Court's decision by authoring dissenting opinions. In only 1/4 of those cases did the Court--that is, a majority of the Justices--side with the position to protect racial minorities.

That may be good or bad. Wise or foolish. Faithful to equal protection and civil rights or not. [Again, I think the record is terrible.]  But the record IS what it IS. Pretty weak on protecting racial minorities.

Yes, we'll consider what the particular issues were in these cases and how the Court ruled on each of them in forthcoming posts. We'll also look at the voting records of the individual Justices.

But for now, before we conclude this post, let's juxtapose the Court's general record in cases involving racial discrimination with its more specific record on protecting racial minorities. The visual juxtaposition, especially, helps underscore the contrast.

On the one hand, there's enforcing racial equality generally. On the other, specifically protecting racial minorities from discrimination and its aftermath. Take a look. 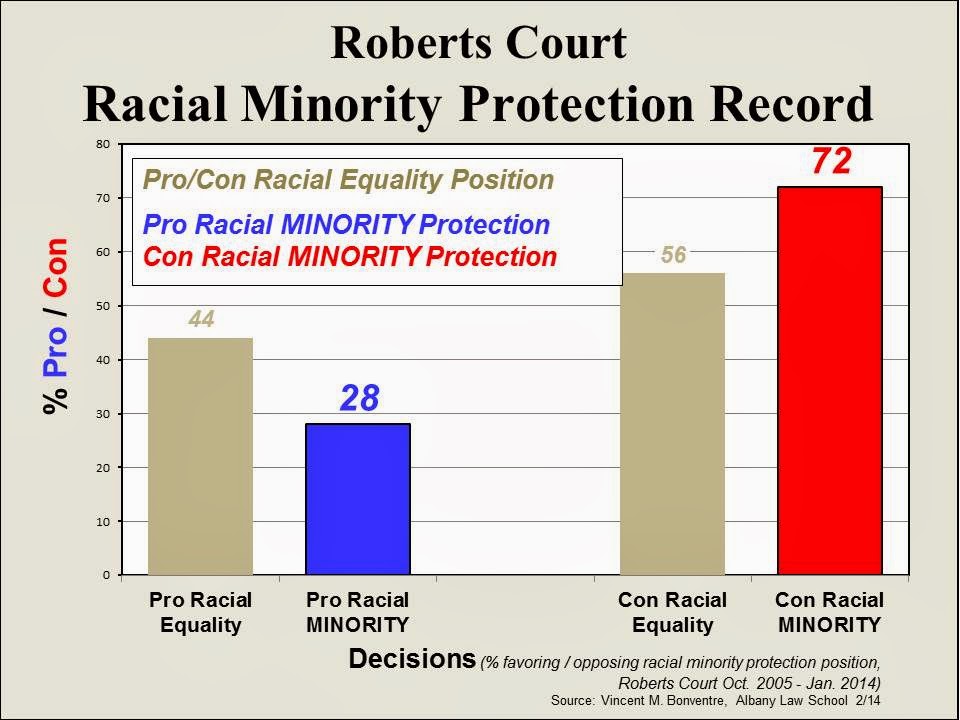 And now, confining our look to those very close divided decisions. 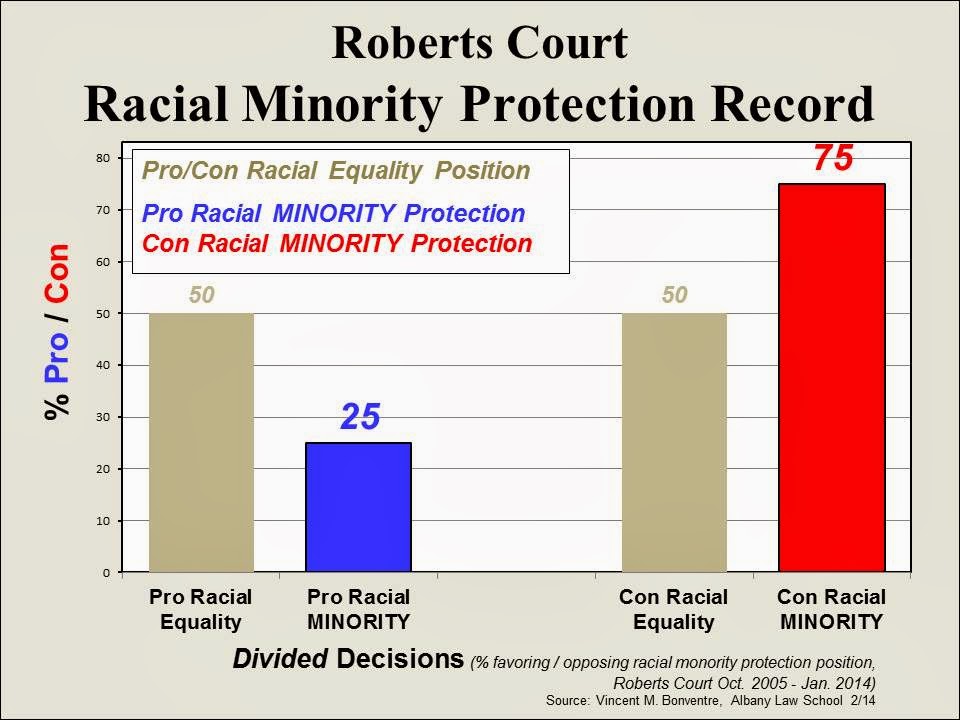 The contrast is similar, but as we saw with Graph 2, the more readily relatable numbers help to underscore just how sharp that contrast is.

To repeat, because it bears repeating: the current Court's record in cases involving issues of racial discrimination is NOT a record of protecting racial minorities. Stated more bluntly, its record of racial minority protection is very weak.

What we need to examine--and will do so in the next post in this series--is what explains the contrast we've been seeing. What is it about the current Court's record that creates the contrast between their treatment of racial equality generally and their protection of racial minorities? That contrast in those very cases in which the Court is (purportedly?) applying and enforcing constitutional equal protection and civil rights laws?