In the last post in this series, we looked at Justice Antonin Scalia's record. We saw that his voting heavily favored complaints brought by Whites, and virtually never those by Racial Minorities.

We also saw that, regardless of the claimant's race, he rarely voted for the position that would help protect Racial Minorities. Moreover, we saw that his record did not correspond to support for race-blind equality either. Instead, his voting largely opposed measures and arguments for the promotion of race-blind equal treatment--except where the beneficiaries would be White.

[Disclosure: Yes, I find Scalia's record appalling--if not wholly surprising. But the description of Scalia's record is based on how he actually voted, not on my or anyone else's opinion of the Justice himself.]

Now let's turn to Chief Justice John Roberts. Let's look at his voting, and also look at how his record compares to Scalia's. First, what about voting in support of complaints brought by Whites versus those brought by Racial Minorities? 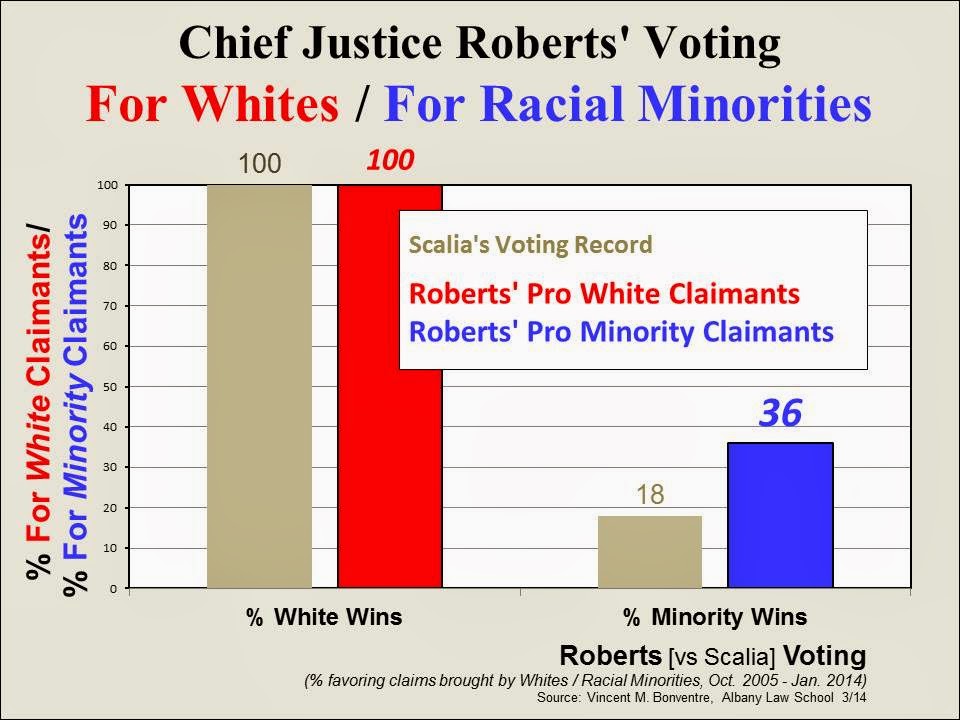 Roberts' voting support of Racial Minority claimants has not been strong. But it has been double that of Scalia's. Indeed, if we exclude the unanimous decisions--where the issues were sufficiently straightforward to garner every Justice's vote, including Scalia's--the contrast becomes sharper. Take a look.
GRAPH 2 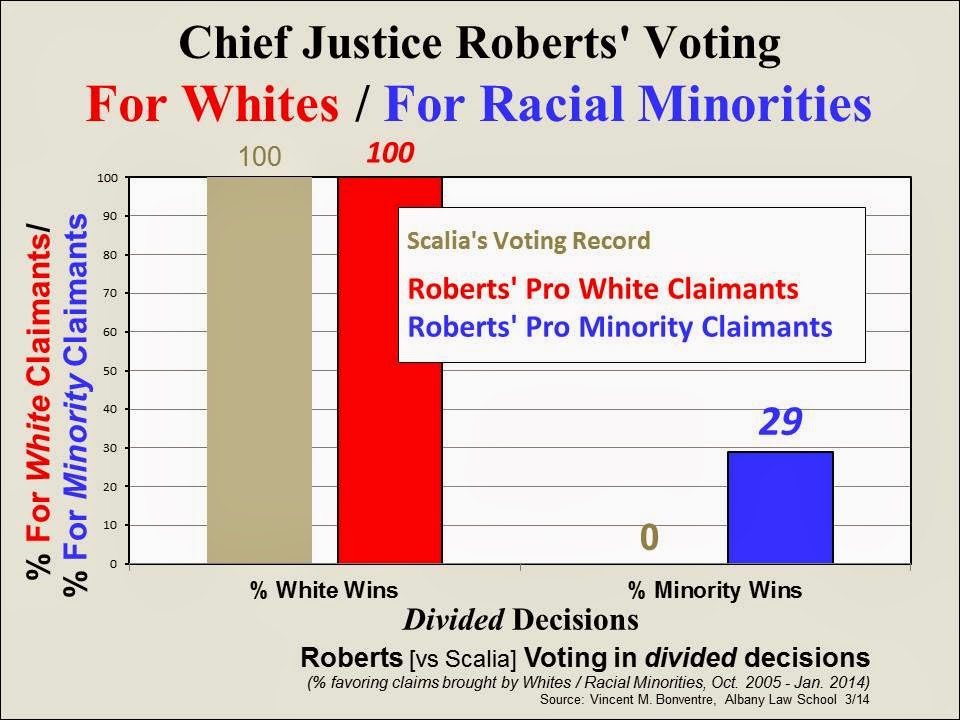 In those cases where the Justices divided--i.e., those closer cases where there apparently were strong arguments on both sides--Roberts did sometimes vote to uphold the complaint brought by Racial Minorities. As we've seen, Scalia never did.

For example, in CBOCS West v Humphries (2008), Roberts voted with the majority to hold that it was a civil rights violation (Civil Rights Act section 1981) to retaliate against an employee for complaining about racial discrimination, and that an employer would be liable for doing so. Scalia disagreed.
Similarly, in Snyder v Louisiana (2008), Roberts was with the majority to condemn the prosecution's exclusion of jurors based on their race. Scalia disagreed with that too.

Now, what about Roberts' record in support of measures and arguments to promote equal racial treatment, without any regard to the complainant's race? That is, his record on anti-racial discrimination regardless of the race of the victim or beneficiary. And let's exclude those more straightforward cases where every Justice agreed. So just the divided ones. Let's see.
GRAPH 3 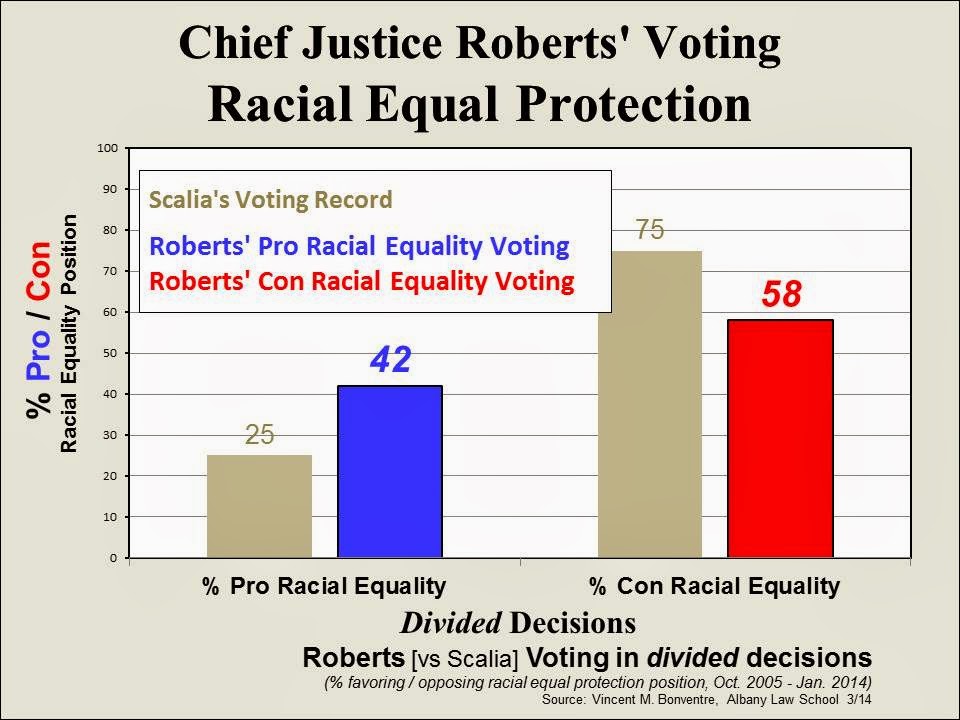 Roberts' record is not strongly supportive of simple racial equal treatment. Yes, he's been more supportive than Scalia. But Roberts' voting does not suggest a strong commitment to measures or arguments promoting race-blind equal treatment. Not a strong commitment to eliminating discrimination on the basis of race, whether that discrimination be deemed by some to be invidious or beneficent.

Perhaps this is anti-climactic and fully expected after what we've already seen. But here it is to obviate any guesswork.
GRAPH 4 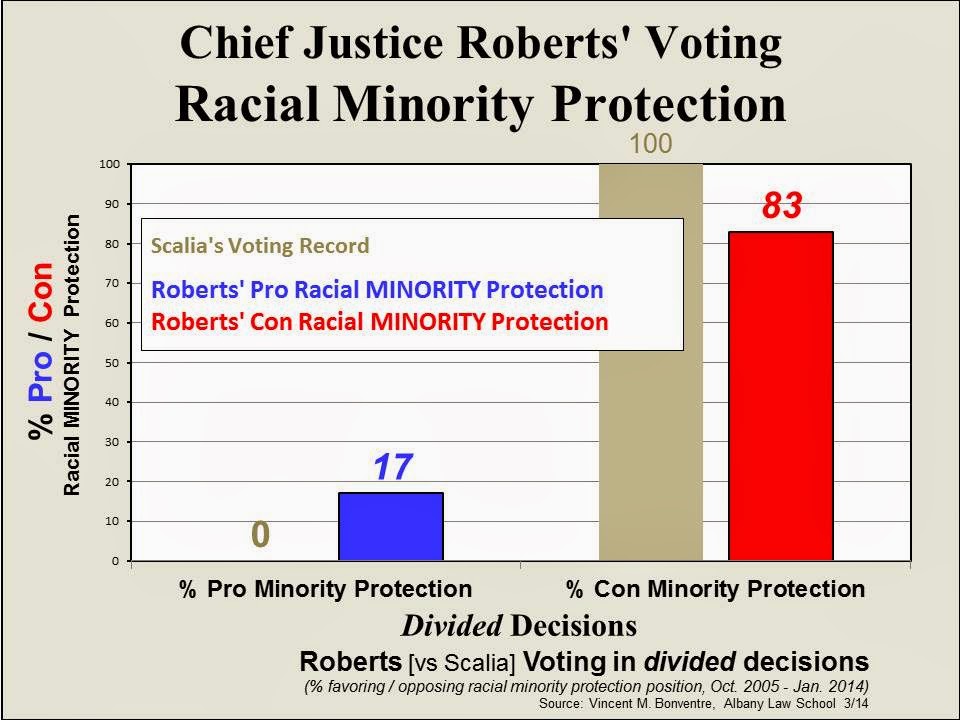 Roberts' voting has been somewhat more protective of Racial Minorities than Scalia's--not too difficult since the latter's record is a perfect zero in these non-unanimous cases. But Roberts' record, like Scalia's, is lopsidedly opposed to measures and arguments aimed at protecting Racial Minorities against discrimination. Whether in employment, voting, redistricting, education, or elsewhere, Roberts rarely voted for the position that would aid Racial Minorities.

Again, as opposed to Scalia, Roberts did vote that retaliation is unlawful in CBOCS, and that race-based exclusion of jurors is unconstitutional in Snyder.

Additionally, regarding measures to aid Racial Minorities, there's Roberts opinion for the Court in Fisher v University of Texas (2013). Writing for the majority, Roberts took the position that racial affirmative action in higher education admissions may be permitted when it is justified by some compelling reason in a particular case. Scalia disagreed that it is ever justified.

In short, Roberts' voting record in racial discrimination cases has been very supportive of complaints brought by Whites, and very infrequently so when brought by Racial Minorities.
Regarding equal treatment, his voting has been somewhat more opposed to measures and arguments to promote racial equality than it has been supportive.
Finally, as for protecting Racial Minorities, he has overwhelmingly voted in opposition to measures and arguments aimed at such protection.

As noted above with regard to Scalia's record, this description of Roberts' voting is based on his actual votes, not on my or anyone else's opinion of the Chief Justice--or, for that matter, of his record. To be sure, some will be dismayed by Roberts' voting record, while others will find it encouraging. But whatever the reaction, his record is what it is.

In the next post in this series, we'll take a look at Justice Anthony Kennedy.