Let's now turn our attention to the individual Justices' records. How have they voted in racial discrimination cases?

We start with Justice Antonin Scalia. He's been on the Court the longest and he's the most--well, colorful. His detractors will no doubt view the term as overly euphemistic; his fans, disparaging.

Be that as it may, Scalia is well-known as an outspoken proponent of "originalism." He says that he interprets constitutional and statutory provisions by adhering to their original meaning. Among other things, he argues that this methodology avoids injecting personal ideological preferences into the law.

[To be blunt, I don't buy it. Neither do many other judicial scholars, on and off the bench, who are brighter and more important than me--e.g., Judge Richard Posner of the U.S. Court of Appeals for the 7th Circuit. (Like Scalia, a Reagan appointee.)]

With that in mind, let's get to the task at hand: Scalia's voting record in cases involving issues of racial discrimination.
[The pool of cases--all those before the Court since John Roberts was appointed Chief Justice--was described in part 1 of this series. An abridged description is included at the end of this  post.]

First, take a look at what may be the most striking findings in examining Scalia's record. 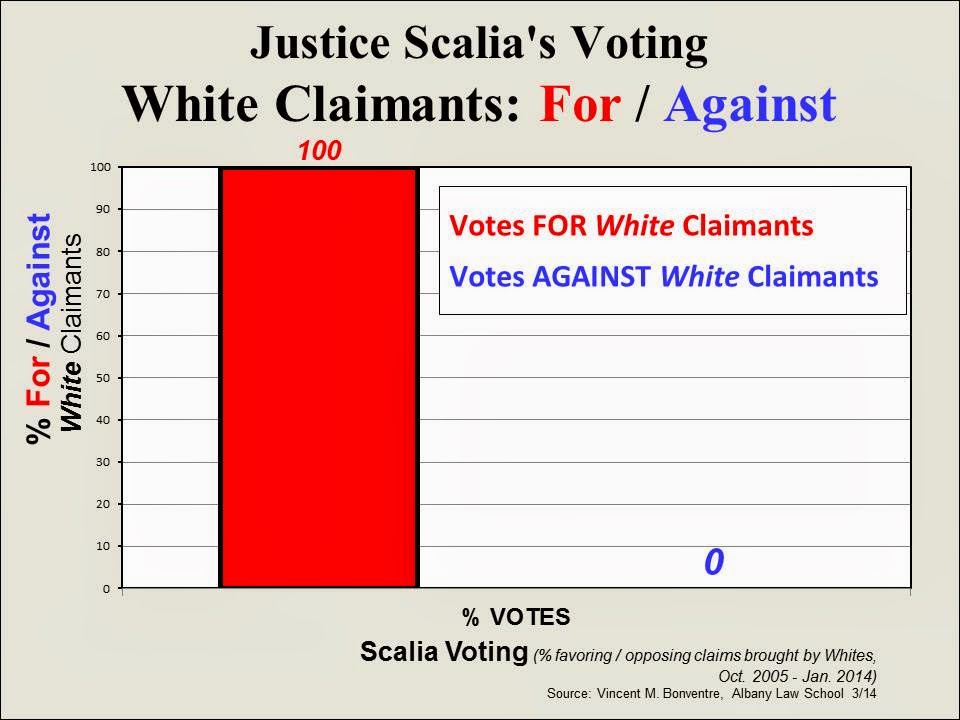 Yes. In cases where Whites complained of racial discrimination or about some other civil rights issue, Scalia voted to uphold their claim every time. Whether claiming discrimination on the basis of their being White, or complaining about favoritism for minorities or the requirements of civil rights laws, White claimants always won Scalia's vote.

What about Scalia's record in cases where racial minorities were the ones complaining? Take a look.
GRAPH 2 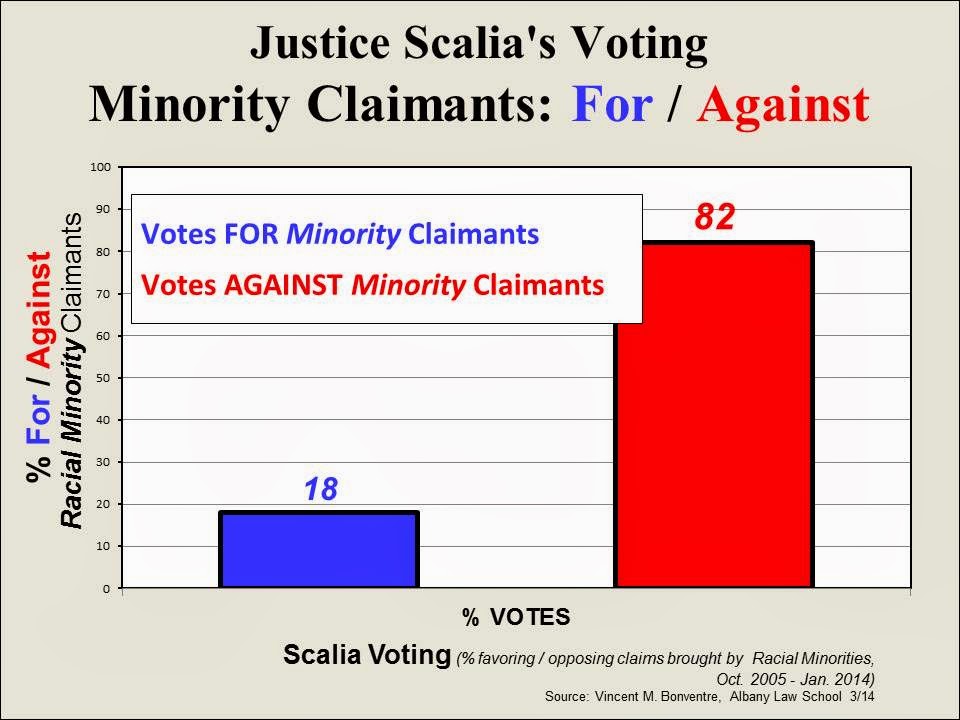 
Scalia rarely voted to uphold claims of racial minorities. Overwhelmingly, he voted against their complaints of discrimination or retaliation in the workplace or discrimination in any other context.

Let's juxtapose Scalia's voting in favor of claims by Whites and against those by Racial Minorities.
GRAPH 3 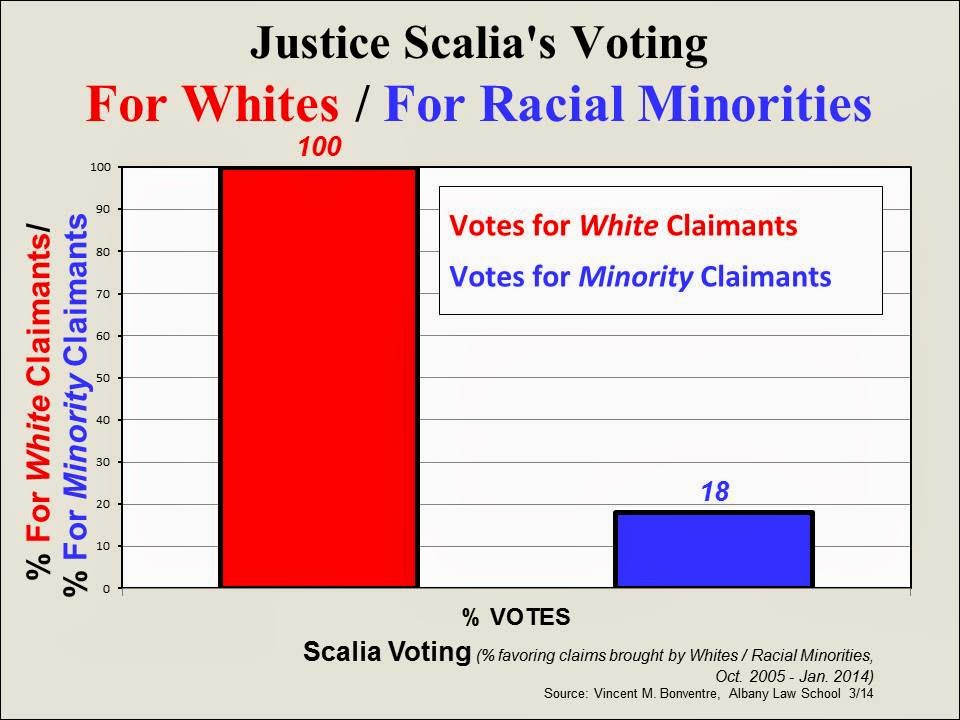 In favor of all the claims brought by Whites, and only a very small fraction of those brought by Racial Minorities. But it's even more stark than that.

The very few times Scalia favored claims brought by Racial Minorities were in cases where the issue was pretty clear and hard to avoid. They were cases where the Court was unanimous. Excluding those cases, Scalia's record is absolute--dually so. Look:
GRAPH 4 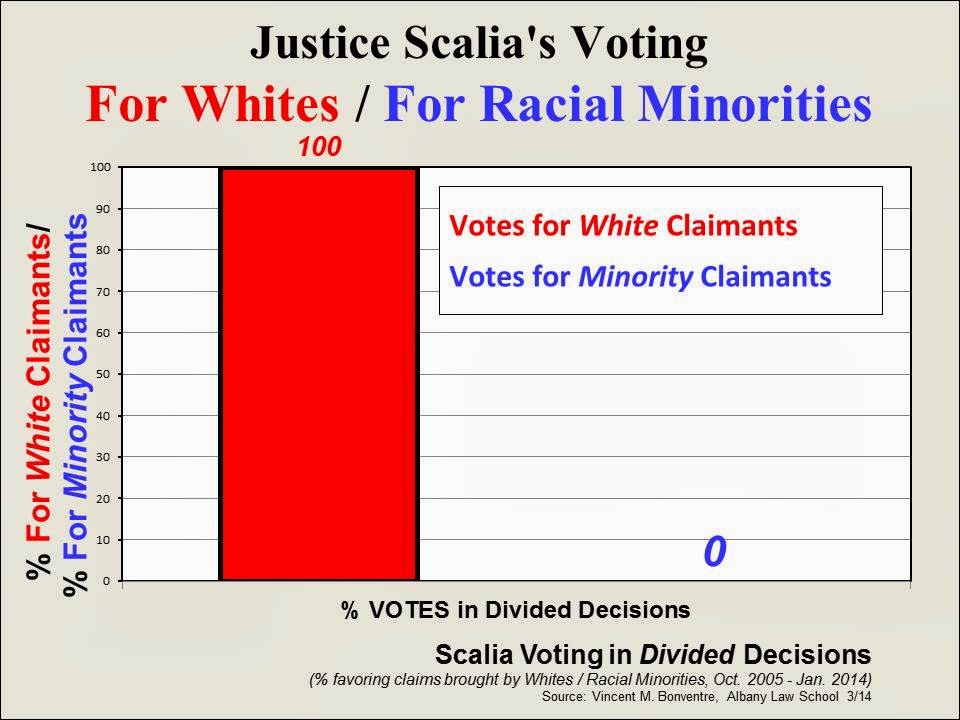 On the one hand, absolutely supportive of White claims. On the other, absolutely opposed to those by Racial Minorities.

It is, of course, possible that Scalia's voting record simply reflects his commitment to unconditional equality and equal treatment regardless of race. No special treatment. No favoritism. Pure race blindness and insistence upon it from government and business.

So what is his record in these cases in promoting or protecting equality and equal treatment and enforcing laws that require just that?
GRAPH 5 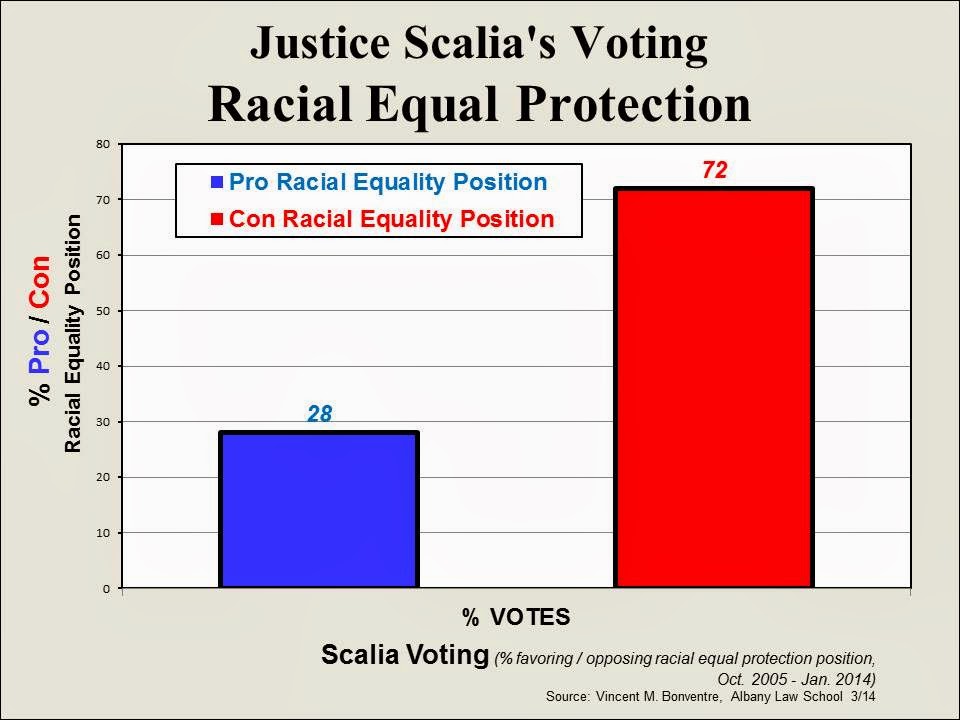 Restricted to the divided cases, his record is not much changed.
GRAPH 6 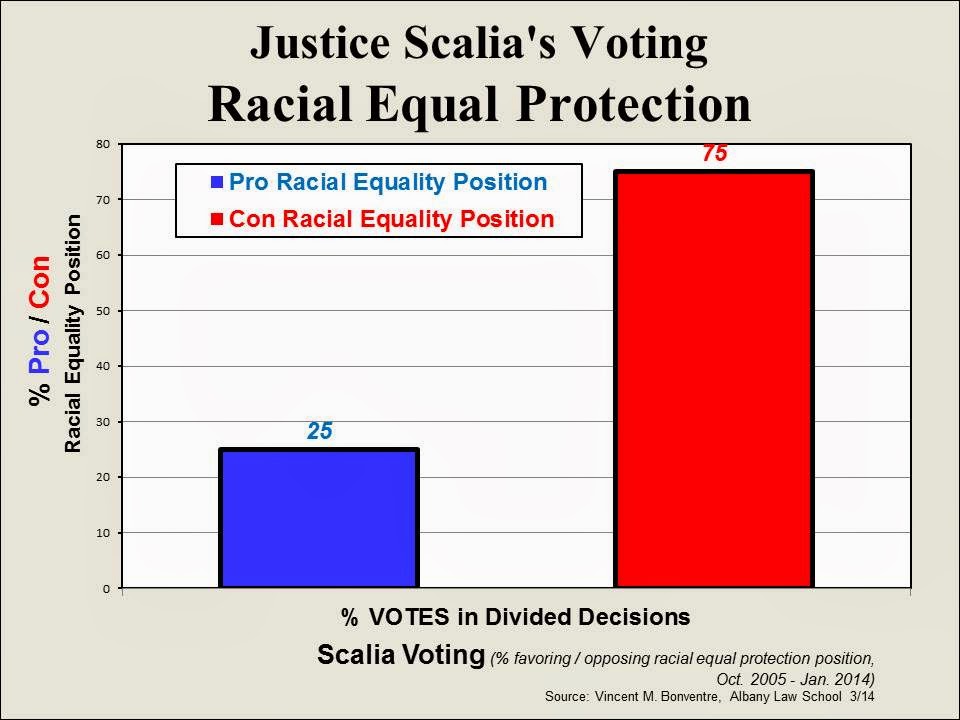 Now, returning briefly to "originalism." The original intent of the 14th Amendment Equal Protection guarantee, of the Civil Rights Laws, and of the Voting Rights Act was the same. It was to protect Racial Minorities against historic racial discrimination.

So, let's take a look at Scalia's record on voting to protect racial minorities. We'll juxtapose it with his record on unqualified equal treatment.
GRAPH 7 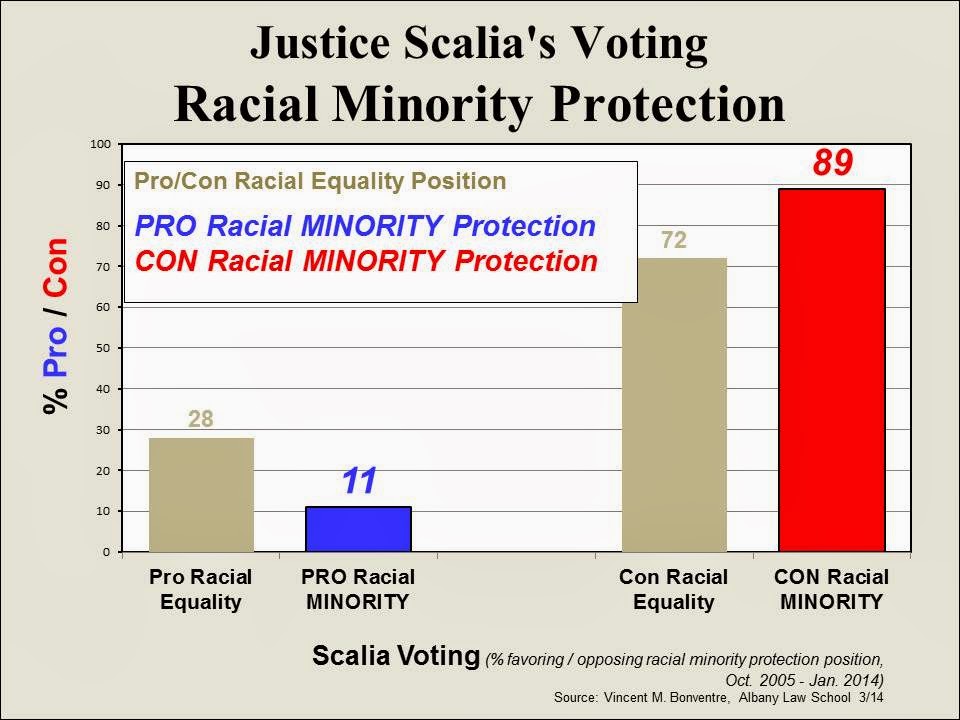 Well, not surprisingly--at least from what we've already seen--his record of protecting Racial Minorities is even weaker than his record on race-blind racial equality. He has rarely voted to enforce measures intended to protect Racial Minorities, or in a way that does so.

And as we've seen before, when unanimous decisions are excluded, Scalia's record is even more stark.
GRAPH 8 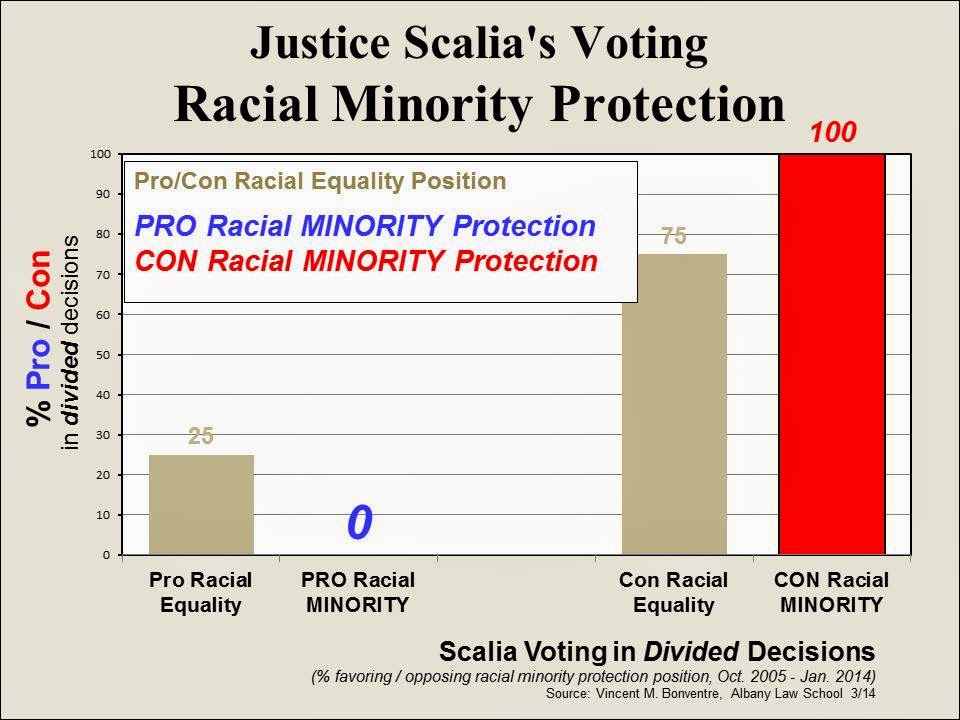 [I make no bones about it. I think Scalia's voting record is appalling. Whatever his reasons, whatever his biases--we all have them--Justice Scalia's record is unmistakenly pro-White and hostile to the claims and protection of racial minorities.]

Next post in this series, we'll look at the records of one or two other Justices.

[The pool of cases examined for this series:
There has been a wide variety of such cases before the Roberts Court. Cases dealing with issues critical to the nation's approach to racial equal protection. Issues involving such matters as voting rights, affirmative action in education and employment, race-based gerrymandering, race-based promotions and terminations, race-based jury selection, retaliation against discrimination complainants, etc.
There have been 18 such cases in all.
Now what about the very closest cases among these? Those cases...in which the Justices could not agree. That is, those cases that resulted in divided decisions. In dissenting opinions. In the Justices taking different sides.
Of the total 18 cases, 12 were very close ones that resulted in divided decisions.]