Let's consider a few additional common denominators--part of the "stream of tendencies"--running through Judge Leslie Stein's choices on the Appellate Division. 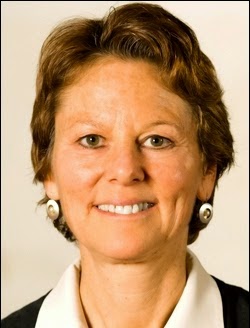 We've already seen that the more-liberal Judges on New York's high court are the ones who most regularly have agreed with her opinions on appeal. (See Part 3.) Let's see what else there is in her record.

Her positions on aggrieved women and their children
Another striking feature of Judge Stein's record is her strongly sympathetic inclinations toward women and children who have been injured or claim another's unfair treatment. Whether the case involved criminal conduct, possible negligence, or the need for assistance, Stein's opinions--in the majority or dissent--typically argued for their relief or redress.

Here are a few examples:
Kayser v Sattar (2008) [Majority opinion, over a 2-judge dissent, reversing a jury verdict for the medical malpractice defendants and ordering a new trial for the mother whose child was injured during birth]; Dowd v Dowd (2009) [Dissenting opinion arguing that the ex-wife needed and was entitled to higher maintenance than was awarded]; Davis-Taylor v Davis-Taylor (2010) [Dissenting opinion arguing that the father's failure to provide child support was willful and justified redress]; Ithaca Sch. Dist. v NYS DHR (2011) [Majority opinion, over 1 dissenter, holding that a school district could be liable for failing to protect a student from racial harassment (A divided COA, 4-3, disagreed and reversed.); Bukowski v Clarkson University (2011) [Joined a dissenting opinion arguing that the college should be liable for failing to exercise reasonable care to protect a freshman athlete from serious injury (A unanimous COA agreed with the majority.)]; Torres v Rich (2012) [Dissenting opinion arguing that a group home should be liable for failing to adequately supervise a juvenile in its care who was injured]; People v Lashway (2013) [Majority opinion, over 1 dissenter, denying a rape convict's petition to lower his sex offender classification].

Her positions on the review of administrative agency determinations
Deference. In a word, that's the common thread in Judge Stein's record regarding appeals challenging administrative decisions. Unless really off-the-wall, the decisions of agencies that are vested with the responsibility and authority to resolve certain categories of controversies should not be disturbed by judges. That seems to be have been one of Judge Stein's firmest positions at the Appellate Division. It's manifest in a wide variety of administrative determinations.

Here are some illustrations:
Ithaca Sch. Dist. v NYS DHR (2011) [Majority opinion, over 1 dissenter, upholding the determination of the State Division of Human Rights that the school district was liable for failing to protect a student from racial harassment (A divided COA, 4-3, disagreed and reversed.)]; Consumer Directed Choices v NYS OMIG (2011) [Majority opinion, over 2 dissenters, upholding the determination of the Office of the Medicaid Inspector General to withhold medicaid payments pending a medicaid fraud investigation]; Utica v Daines (2012) [Dissenting opinion arguing that SEMSCO (State Emergency Medical Services Council) had considered all relevant legal and factual factors in denying the city's application for its municipal ambulance service (An appeal to the COA was dismissed as moot)];  Silverman v NYS WCB (2012) [Majority opinion, over a dissenter, upholding the determination of the Workers' Compensation Board determination not to renew the license of a nonattorney to represent workers before the board]; M/O Kent v Lefkowitz (2014) [Dissenting opinion arguing that PERB (the Public Employment Relations Board) properly dismissed an improper practice charge filed by PEF (Public Employees Federation, AFL-CIO)].

Her positions on the more-vulnerable party
Of course, this is closely related to Judge Stein's sympathetic positions on women and their children that we've already discussed. Perhaps it is just another way of viewing the same sort of inclinations.

Her positions on rights of the accused
In contrast to what we've seen regarding some other matters, there is no overwhelmingly clear pattern that emerges from Judge Stein's opinions in criminal cases. Her record doesn't place her among the ranks of crime control/"tough on crime" judges. But neither does it suggest that she falls within the due process/"coddling criminals" camp either.

Nevertheless, if we look solely at her dissenting opinions--that most personal and revealing category of judicial statements, where a Judge takes a public stand in opposition to her court, i.e., against a majority of her colleagues--we do see some hints of inclination. In some of these dissenting opinions, Judge Stein has taken stands that show her to have been more sensitive to intrusions on a criminal defendant's rights than her colleagues were.

Well, there it is.

Further examination and additional analysis would likely uncover more of the "stream of tendencies" flowing through Judge Leslie Stein's judicial work at the Appellate Division. As we have seen, however, we can still at this point say a few things with some confidence about her record.

She seems to be quite deferential to administrative agencies in their areas of expertise and responsibility. And she has shown herself willing to take a stand on behalf of the criminally accused whose rights might have been compromised.

Finally, the Senate Judiciary Committee's confirmation hearings are scheduled for this coming Monday, February 9. There appears to be nothing in her record on the Appellate Division that might stir opposition--from Republicans or Democrats--to her appointment to the Court of Appeals.

In the next post or two, we'll take a look at Judge Eugene Fahey's record.