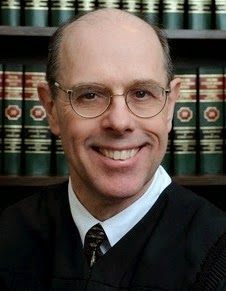 Eugene Fahey, who has served on the Appellate Division, 4th Department for nine years (the state's intermediate appeals court that sits in Rochester), was nominated by Governor Cuomo in January to sit on New York's highest court. The Senate Judiciary Committee is scheduled to hold hearings on his nomination on Monday.

As with Leslie Stein, whose nomination will be considered the same day, Fahey seems assured to get the committee's approval and then confirmation by the full Senate. He has considerable judicial experience, he has a reputation for collegiality and cordiality, he's been placed on the recommended list for the last four Court vacancies by the Commission on Judicial Nomination, and he has been uniformly rated very highly by bar associations across the state. It would be most surprising if he were not warmly and overwhelmingly received and confirmed.

But who exactly is Judge Fahey? Not what's in his formal biography which is available from several sources with a quick Google search. But who is he jurisprudentially? What does his judicial record--opinions, majorities and dissents--reveal about him? Yes, that "stream of tendencies" we've been discussing in the last couple of  posts on Judge Stein. Yes, what are Fahey's "tendencies," leanings, strongly held perspectives? The common threads in his judicial work.

Well, a review of his Appellate Division opinions--with special focus on the most revealing ones, i.e., the dissenting opinions and majority opinions responding to a dissent--suggests that there are certainly a few dots that can be connected. So let's connect the dots. At least a few of them.

Dissenting opinions
Lots of them! His record evinces no reluctance to disagree with a majority of his colleagues. There is never anything biting or otherwise disagreeable in his dissents. But he apparently feels no overriding need to just go along with his colleagues when he thinks they are mistaken.

For example, over the same period of time in which Judge Stein issued 13 dissenting opinions as an Appellate Division Justice (i.e., since 2008), Judge Fahey has issued over 50.

In addition to being many, Fahey's dissents cover a wide range of issues, civil and criminal, substantive and procedural. And there are some pretty clearly patterns. Let's take a look.

Review by the Court of Appeals
Vindications? Yes. Several of Fahey's dissenting opinions--i.e., his disagreements with the majority of his colleagues--received the imprimatur of the Court of Appeals. But even more notable than that is the breadth of approval his positions have garnered at the high court.

Whether criminal or civil, pro-plaintiff or pro-defendant, Fahey's vindicated dissents received a unanimous or near-unanimous vote. It was not just the more-liberal Court of Appeals Judges who approved his dissenting positions, or just the more-conservative ones. But all the Judges, or all but one of them in one case.

Positions in criminal cases
A review of Judge Fahey's dissenting opinions in criminal cases reveals a clear willingness to disagree with his colleagues to argue in favor of the defendant. Indeed, overall, these opinions manifest a strong determination to enforce the due process/rights-of-the-accused side of the criminal justice system. There are cases where Fahey does adopt a crime control/law-and-order posture. But those seem to be exceptions to the rule, and they represent certain distinct categories of crimes and circumstances.

Before we look at the exceptions, let's look at some of the more typical cases in which he takes a more-liberal, pro-defendants' rights position.

Official misconduct
Among the most conspicuous exceptions to Judge Fahey's general tendency to side with the accused in close cases, where rights or fair treatment have arguably been violated, are those where public officials are the ones guilty of criminal wrongdoing. But his tough-on-official-misconduct predilection is no less evident in cases where the official wrongdoing was engaged in on behalf of law enforcement.

Children and other vulnerables
Whether the case is a criminal one or civil, if a child or other vulnerable person has been victimized, Judge Fahey has typically adopted positions of being tough on the wrongdoer--especially if particularly cruel or barbaric--and sympathetic and protective toward the victim. Indeed, these tendencies of his often trump the others.

To be sure, there's more to uncover in Judge Fahey's record at the Appellate Division than we've identified here. But what we've seen here does tell us quite a bit about Governor Cuomo's most recent nominee, and what we might expect of him once he's confirmed and takes his seat on New York's highest court. Yes, the foregoing should give us some sense of the kinds of choices he has made on the Appellate Division and, perhaps, the kinds of choices we should expect him to make on the Court of Appeals.

So...No hesitation to dissent. Oftentimes in sync with the high court even when a minority voice among his Appellate Division colleagues. A pretty insistent voice for taking the rights of the accused seriously--the right to effective counsel, the benefit of reasonable doubt, and fair sentencing. Little tolerance for official wrongdoing. Perhaps even less tolerance for doing harm to children and others who are vulnerable among us.

Well, those are among the most conspicuous "tendencies" reflected in Judge Fahey's record that we've seen from an examination of his opinions in divided decisions--especially in those cases where he has been willing to publicly express disagreement with a majority of his colleagues in a published dissent.

The Senate hearings on both Judge Stein and Judge Fahey will begin later this morning. (It's now early Monday morning as I'm concluding this.) Maybe--just maybe--we'll learn a bit more about each of them from their presentations to the Judiciary Committee and their answers to the Senators' questions. Good luck to them both.