As an appendix to the Recap on the immediately preceding post from earlier today, here's an interview with Liz Benjamin on her Capital Tonight.

Liz questions me about the Obamacare subsidies decision and about the housing discrimination case the Court decided the same day. She then turns to the recently announced retirement of New York Court of Appeals Judge Susan Read, and the dramatic change in the high court over the course of a few years--with Governor Andrew Cuomo being able to remake its entire membership. 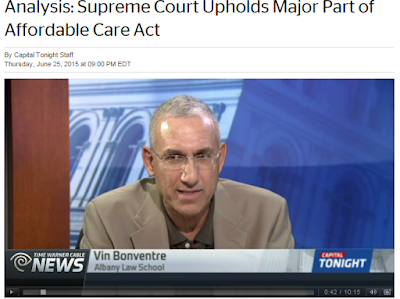 The US Supreme Court delivered a huge victory to President Obama today, upholding a key part of the Affordable Care Act.  That decision means millions of Americans across the country who enrolled through state health exchanges will not lose their insurance. Vin Bonventre from Albany Law School joined us to discuss.