Did the Supreme Court shift to the left this past term? Especially in the aftermath of decisions that saved Obamacare subsidies and protected same-sex marriage, there has been some commentary--and a general sense--that the Court has done just that.

So did the Court actually lean more politically liberal in its rulings this year?

In short, yes. As in, you bet! The change from the recent past was considerable.

An examination of the Court's entire decisional output and the Justices' voting over the course of the October 2014 term (i.e., the first Monday in October 2014 to the end of June 2015) reveals that the ideologically liberal side of the issues did quite well overall--and emphatically so. Not only did the Court adopt the liberal position more frequently than it has in past years, but it actually adopted the liberal position this term more frequently than the conservative one. Much more frequently!

Before we look at the numbers and the graphs, let's be clear what we're talking about when we say ideologically "liberal" and "conservative." We use those terms here in the sense they are customarily used in political discussion and judicial studies. So liberal versus conservative would, for example, refer to crime control (pro-prosecution) versus rights of the accused (pro-defendant), labor/workers rights versus business, business regulation versus deregulation, personal injury plaintiffs versus professional malpractice defendants, social change versus traditional values, secularism versus religion, and the like. (And as is customary in judicial studies, we restrict ourselves to divided decisions--i.e., where both the liberal and conservative positions were strong enough to secure the support of one or more Justices and, thus, split the Court.)

So, just how well did the liberal side of the issues fare this past term at the Supreme Court? And how did the Justices vote on those issues? Take a look: 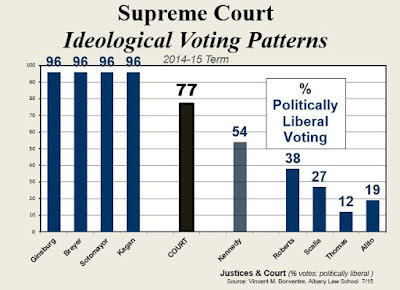 77%!
Yes, in 77% of the cases in which there was a strong enough liberal versus conservative issue that the Justices were divided, a majority of the Justices--i.e., the Court--adopted the liberal position.

How does that compare to the previous year?

Well let's see. The following graph juxtaposes the Court's decisional record for this term and last year's--i.e., the October 2013 term (2013-14). The graph also includes both years' voting records of Justice Kennedy and Chief Justice Roberts. Their records changed the most dramatically and made the most difference between the two years. Take a look: 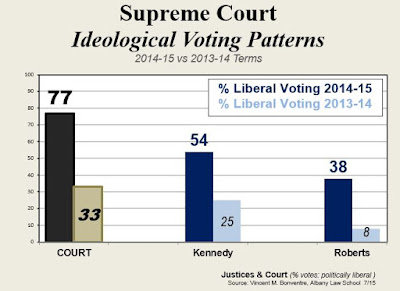 As the graph shows, the Court more than doubled the frequency with which it adopted the liberal position in a case. 77% this year versus 33% the year before.

Coincidentally--actually, not a coincidence, but likely a significantly contributing cause for the change in the Court's record--Justice "swing vote" Kennedy's record this year was also more than twice as liberal as it was the year before.

Chief Justice Roberts' record was also considerably more liberal this year. He rarely voted on the liberal side last year. But by sharp contrast this year, as previously mentioned, he supported the liberal position more than a third of the time.

So... no doubt about it. The Court took a liberal turn in its decisions this year.

But what about the really controversial hot-button cases? How did the Court do in cases that presented the most highly partisan-charged issues? Issues like Obamacare and same-sex marriage, of course. But also like the death penalty, immigration, claims of racial discrimination, gun rights, campaign spending, environmental regulations on business, etc. Those issues that not only have a liberal versus conservative component, but where Democrats and Republicans are most deeply divided.

In the next post we'll restrict ourselves to cases with those kinds of issues. We'll see how deep this year's liberal shift was.