We already saw that this was a good year at the Court for liberals. (See Part 1.) On issues with clear liberal versus conservative divides--e.g., law & order versus rights of the accused, worker rights versus business, social change versus traditional values, etc.--the Court sided with the ideologically liberal position most of the time. Indeed, in those cases where such issues divided the Justices themselves, the liberal side won 77% of the time, or more than three times as frequently as did the conservative side.

But what if we sharpen the focus to those cases that presented the deepest partisan divides between Republicans and Democrats? Cases involving such highly partisan-charged issues as immigration, the death penalty, gay rights, racial disparities, voting rights, social welfare programs, etc.? Those cases involving issues where politicians of the 2 major parties--as well as the party faithful--disagree most fervently?

Let's look at the Court's record this past year in terms of those issues. Yes, the Court's record on ideologically-charged cases was markedly liberal. But what was it on just those cases involving the especially partisan-charged issues? 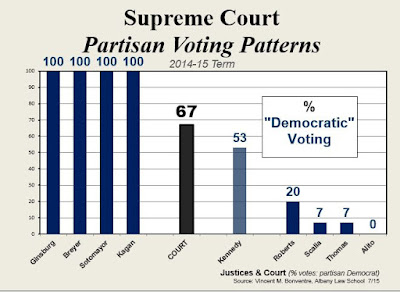 Note that the Court not only sided with the "Democratic" positions most of the time, but did so 67% of the time, or in more than twice as many cases as it didn't. Note also that the Court's 4 liberals (Justices Ginsburg, Breyer, Sotomayor, and Kagan) voted in support of the Democratic position in every case. Stated otherwise, none of the 4 ever voted on the "Republican" side of a partisan-charged issue.

As for the Court's more conservative members, Justice Alito never voted on the Democratic side of an issue in these cases, and Justices Scalia and Thomas virtually never did. Chief Justice Roberts did so 20% of the time, or in one fifth of the partisan-charged cases. Perhaps most notably, swing-vote Justice Kennedy supported the Democratic position more than half of the time (53%) this past term.

Consequently, with the 4 liberals voting on the Democratic side of the issue in every partisan-charged case, only one more vote was needed to make a "Democratic" majority, With Kennedy voting on that side more than half the time, and Roberts doing so in 20% of the cases, it's evident how the Democratic side had the Court's majority as frequently as it did.

To underscore just how significant the Court's record on these partisan-charged cases was this past year, let's look at a comparison with the year before. And let's focus on the major shifts: 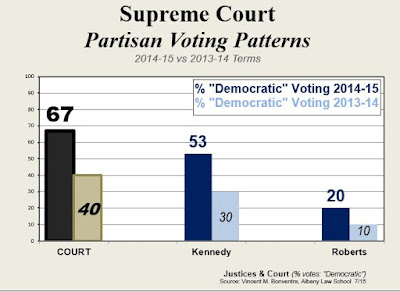 67% versus 40%!  Quite a contrast. A shift from the previous term in which less than half the decisions (40%) favored the Democratic position, to this term in which two thirds (67%) of them did.

Consider also the shift in Justice Kennedy's voting in these partisan-charged cases: from less than a third Democratic (30%) to more than a half (53%). And Chief Justice Roberts' voting: from 10 to 20%.

Yes, in cases this past term raising issues involving racially disparate redistricting, racially disparate housing policy, imprisonment of an immigrant, deportation of an immigrant, the rights of a death penalty defendant, displaying the Confederate flag, Obamacare subsidies, and same-sex marriage--in all of these and more, the Supreme Court (i.e., a majority of the Justices) supported the position favored strongly by Democratic politicians and voters.

Of course, that also means that the Court (i.e., again, the majority) in these cases rejected the position strongly favored by Republicans. Let's simply invert the graphs above to display the pro-Republican numbers. Take a look at the "Republican" decisional record of the Court and the Justices' corresponding voting for this past year: 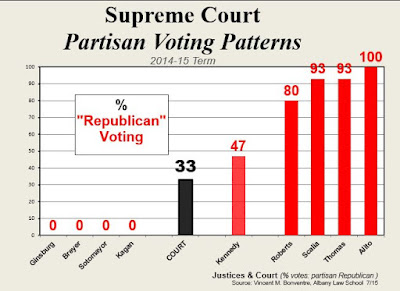 Again, the 4 liberal Justices never voted for the "Republican" position in these highly partisan-charged cases. On the other hand, Justices Scalia, Thomas, and Alito either always did or virtually.so. Chief Justice Roberts wasn't nearly as one-sided as any of the aforementioned 7 Justices were. And Justice Kennedy, although he is a Republican, supported that side of the issue less than half the time. The result: the Court decided "Republican" in only one third of the cases.

Now, contrasting with the previous year: 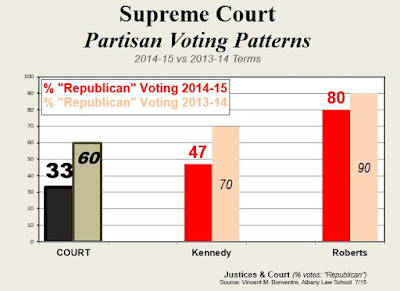 Justice Kennedy's voting for the Republican position in these partisan-charged cases dropped substantially, from more than two thirds the previous year (70%) to less than half this past term (47%). Chief Justice Roberts' support for those same positions dropped somewhat, from 90 to 80%. In large measure because of the change in Kennedy's record, and to a lesser extent that of Roberts, the Court's overall support for the Republican side of the issues this year (33%) was about half of what it was the year before (60%).

Soooo, a liberal shift in the Court's ideological record? Unquestionably, and significantly. Indeed, even on the most highly partisan-charged issues, the Court's record shifted in support of the "Democratic" positions. And this, even though a majority of the Justices are registered Republicans appointed by Republican Presidents.

Is this shift permanent? At least an omen of a directional change? Just a fleeting phenomenon? An aberration? Maybe just the result of the particular collection of cases the Court decided this year?

Well, the answers can't be found in just one year's worth of decisions and votes. But what can be said is this. Whatever the particular variety of cases might have been this past year, the voting records of 7 of the Justices remained basically unchanged. The 4 liberals virtually always voted one way in the ideologically-charged and partisan charged cases, and 3 of the conservatives (Scalia, Thomas, and Alito) virtually always voted the other way.

Additionally, Justice Kennedy remained the swing vote. But this year he swung liberal and "Democratic" significantly more than in past years. And Chief Justice Roberts, both in his votes and his tone, has evinced a softer conservative leaning than that of the Court's 3 most conservative members.

Keep a close eye on Kennedy and Roberts--and, of course, on any possible retirements and replacements. There's always lots to follow with the Court. And we shall see.