In the last post, we looked at the 4-3 lineups in criminal appeals. In this post, continuing with our examination of the first 6 months of New York's highest court under Chief Judge Janet DiFiore, we'll proceed to those 4-3 lineups in civil cases.

As was noted previously, the Court of Appeals divided 4 to 3 in a total of 10 cases during this 6 month period. Of those cases, 7 were criminal appeals, 3 were civil. Despite this much smaller number, however, several very notable patterns still emerge.

Here are the cases and their lineups [Again, click on any lineup pic to enlarge.]:

Civil Cases
Sherman v. NYS Thruway Auth. (5/5/16): the slip and fall claim was precluded because a storm was held to be still in progress.
[4-3]

Wally G. v. NYC Health & Hosps. Corp. (6/9/16): the city defendant's possession of the relevant medical records was held not to excuse the late notice of claim of the defendant's medical malpractice.
[4-3]

Pasternak v. Laboratory Corp. of Amer. (6/30/16): the airline pilot's causes of action in fraud and negligence against the defendants who performed and evaluated the FAA required random drug test were held to be not sustainable under New York law.
[4-3]

Alright, that's all there is. But as noted above, a few notable observations can be made (and are summarized in the graph below the following discussion).

Like Fahey, Judge Jenny Rivera was in dissent in all 3 civil cases. That means that her total being in the majority in all the 4-3 decisions was 4--all in criminal cases. That also means that she and Fahey, who voted together in all 3 of these civil cases, voted together, whether in the majority or dissent, in 7 of the total 10 closely divided cases: 4 criminal and 3 civil.

Rivera was together with Abdus-Salaam, the other multiple dissenter in these civil cases, just as many times: in 5 of the criminal cases and 2 of the civil.

Judge Leslie Stein was in the majority in 2 of the 3 closely divided civil cases. That number added to her majority votes in 3 of the corresponding criminal appeals brings her total to 5--exactly half of the 10 combined criminal and civil 4-3 decisions.

Here's all that in a graph:
(click to enlarge.) 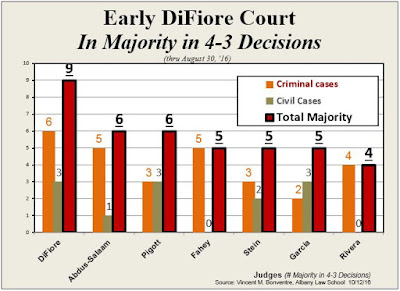 Well, there it is in beautiful technicolor!

One last point about these 4-3 civil cases. In each one, the Court decided against the injured plaintiff seeking compensation. Is that a trend? A pattern when all the divided civil cases--not just the 4-3's--are considered? And is there a corresponding conservative pattern in the criminal cases? And patterns in the individual Judges' voting records?