Now let's take a look at the Court of Appeals Judges' ideological voting patterns in the criminal cases. How frequently has each Judge been siding with the accused? How frequently with the prosecution? More specifically, what are the Judges' voting patterns in those cases where some of them took a more pro-prosecution position than did other members of the Court? Or a more pro-accused position than others?

The figures and graphs that follow reflect every divided criminal decision rendered by New York's high court in the first 6 months of Janet DiFiore's tenure as Chief Judge. That is, every case beginning with those heard in February of this year when DiFiore first presided over arguments, through those decided on the Court's August 30th decision day.

These divided criminal cases encompass all those where a dissenting opinion argued for a result that was more favorable either to the accused or to the prosecution than that rendered by the majority. These also include all those where a separate concurring opinion took issue with the majority on a significant substantive matter, e.g., arguing for a different rule of law that was either more protective of the rights of the accused or was more supportive of the prosecution.

There were 17 such decisions during this early 6-month period of the DiFiore Court. The following graphs reflect the voting of the Judges in these cases.

The first graph displays the percentage of cases in which each Judge voted in support of a position more favorable to the rights of the accused than others on the Court did. These votes are denominated "Liberal/Pro-Accused." 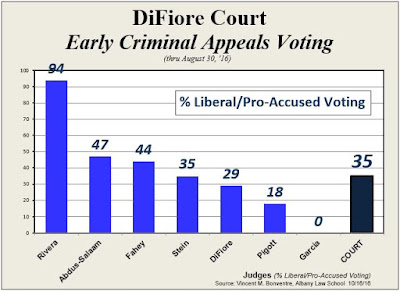 (N.B., the flip-side, "Conservative/Pro-Prosecution" graph is included below.)

As this graph shows quite vividly, Judge Jenny Rivera, who we've previously seen is the Court's most frequent dissenter by a wide margin (See Part 1.), also has the Court's most liberal, pro-accused voting record by a wide margin. Indeed, each of her fairly frequent dissents argued for a more pro-accused position than that adopted by the majority. Moreover, as her 94% liberal record indicates, she sided with the more pro-accused position in every one of the 17 divided criminal cases but one. That was People v. Gray, in which she joined Judge Sheila Abdus-Salaam's majority opinion rejecting a ineffective counsel claim.

The voting record of Judge Abdus-Salaam happens to be the second most pro-accused on the Court. But her record, as well as the very similar one of Judge Eugene Fahey, is half as liberal as Rivera's. Notably, while Rivera has sided with the accused far more frequently than the Court and than any of her colleagues, Abdus-Salaam's and Fahey's records also fall on the pro-accused side of the Court's spectrum--albeit by a much slimmer margin than Rivera's.

On the opposite end of that spectrum is Judge Michael Garcia. He participated in 15 of the 17 divided criminal decisions. He did not cast a vote in favor of the more pro-accused position in any of them.

As we've previously seen, Garcia was in dissent in 5 of the 7 criminal cases where the Court was divided by a 4-3 vote. (See Part 2.) Among the most significant of those cases was People v. John, where he disagreed with the DiFiore-authored majority opinion that recognized a defendant's right to confront an analyst responsible for the prosecution's DNA report. Notably, Garcia authored no other dissent, nor any majority opinion in the divided criminal cases.

The next most pro-prosecution record on the Court during this period belongs to Judge Eugene Pigott. He authored 4 opinions in these divided criminal cases. In each one he took the more pro-prosecution position. In one of those, a dissent, he was joined not only by Garcia--as we just saw, not surprising--but also by DiFiore. It was the only case, criminal or civil throughout this period, where the Chief Judge joined (or wrote) a dissent.

In that case, People v. Berry, DiFiore joined Pigott's dissent which argued that the evidence presented did prove the defendant guilty of permitting children in an apartment with illegal drugs. DiFiore's record, in the 14 divided criminal cases in which she participated, is identical to that of the Court as a whole, except for that one case. As we saw previously (See Part 1.), the Chief Judge has been in the majority in every case since she joined the Court except one--Berry is that one.

Regarding Judge Leslie Stein, her 35% liberal/pro-accused record equals that of the Court as a whole. But, her record is identical to the Court's in number only. In the 4 opinions she authored in these 17 divided criminal cases, every one sided with the accused. Two of those were dissents. In one of them, she wrote in opposition to Abdus-Salaam's majority opinion in People v. Gray (mentioned above), arguing that defendant's trial counsel was ineffective for failing to seek a rehearing on a newly significant Miranda issue.

So that's the Liberal/Pro-Accused spectrum on the Court for the first 6 months of the DiFiore Court. Of course, that spectrum can be viewed from the reverse perspective. So, as promised above, here it is, the "Conservative/Pro-Prosecution" graph: 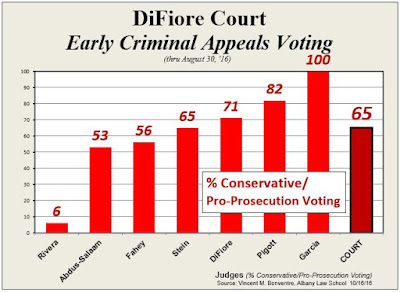 Nothing new. Just the flip-side of the spectrum in the first graph. Again, Judge Rivera's and Judge Garcia's records are decidedly the most Pro-Accused and Pro-Prosecution on the Court, respectively.

Finally. for those who'd like to see both sets of data in a single graph, here that is: 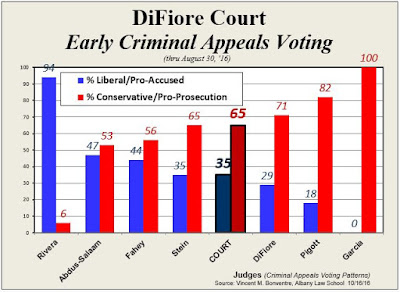 That's a bit noisy for me. But all the Pro-Accused and Pro-Prosecution figures, for each of the Judges and for the Court as a whole, is there in one tidy package.

In the next post, we'll take the same look at the civil cases.