("Updated" is a euphemism for revised, which in turn is a euphemism for including some data that I somehow neglected to include in calculating the figures for the last post. The relative frequency with which the Judges are dissenting remains virtually unchanged, but there are some differences in a few of the totals.)

The graph below reflects the first half year of divided decisions since Janet DiFiore's appointment as New York's Chief Judge. More specifically, it covers the cases considered by the Court of Appeals starting with its February 2016 session and decided in its March through August decision days.

To be clear, these divided decisions are those where at least one of the Judges dissented, as well as those in which a Judge authored a separate concurring opinion expressing a significant substantive disagreement with the majority. They include decisions where the Court was divided over customary liberal versus conservative positions, but also those where the division is not so readily identifiable along such ideological lines. Counting every one of those divided decisions, the total number over this period was 31.

Take a look at this updated/revised graph. 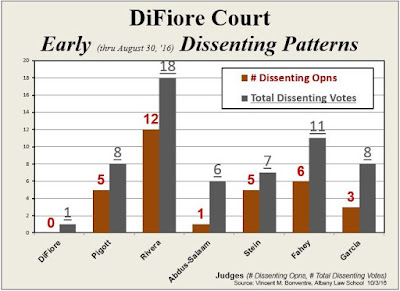 Among the most notable figures reflected in the graph are those that are similar to what we have seen previously. (See e.g., the post on very early dissents.) Judge Jenny Rivera has continued to be the Court's most frequent dissenter, and by a wide margin. Her 12 written dissents over this 6 month period doubles the next highest figure, and quadruples or more the dissenting numbers for several of her colleagues. Similarly, her total number of dissenting votes, 18, far exceeds that of any other member of the Court.

Moreover, as we shall see in subsequent posts--just as we have seen before (See e.g., the post on very early patterns.)--underlying her dissenting frequency is a decidedly ideologically liberal record overall--i.e., siding with the accused in criminal cases and with injured and vulnerable plaintiffs in civil cases.

To be sure, the Chief Judge's dissenting record may suggest to some that she simply casts her vote with the majority. But as we shall see in a subsequent post, other data actually suggests something very different. She may in fact be responsible for creating majorities. So, for example, there have been 10 cases thus far in her tenure where the Court was divided 4 to 3. In all but one of those 10 cases, she was in the majority. Whatever else those numbers may tell us, what cannot be denied is that a change in her vote in 9 of those bare-majority cases would have changed the outcome. In short, her vote was determinative.

In the next post we shall look at the line-ups in those 4-3 decisions. After that, we'll look at ideological voting patterns and other dynamics in this yet-emerging DiFiore court.