Janet DiFiore assumed the center seat of New York's highest court this past February. Since that time, she has presided over 4 monthly sessions of appeals, and the Court has already rendered decisions for 3 of those dockets. 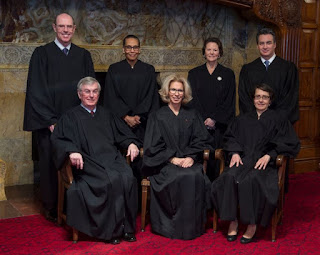 In replacing Jonathan Lippman (who was forced to retire because of New York's moronic mandatory age-70 retirement), the new Chief Judge joins the 7-member Court of Appeals that has been almost entirely recomposed in just a few years. Eugene Pigott, an appointee of then-Governor George Pataki, has sat on the high court since 2006. But every other member of the state's court of last resort is a recent appointee of current Governor Andrew Cuomo.

Jenny Rivera and Sheila Abdus-Salaam were appointed by Cuomo in 2013. Leslie Stein and Eugene Fahey in 2015. And Michael Garcia, like DiFiore, earlier this year.
(For some background on each of the Judges, see, on DiFiore: Parts 1, 2, & 3; on Pigott: Criminal Leaves, Judicial Output, Independent; on Rivera: The Rivera Hearings; on Abdus-Salaam: Love Fest; on Stein: Stein's 'Tendencies'; on Fahey: Fahey's 'Tendencies'; on Garcia: Michael Garcia.)

So it's a very new court, with a very new presiding judge. And yet, and yet, patterns are already developing. 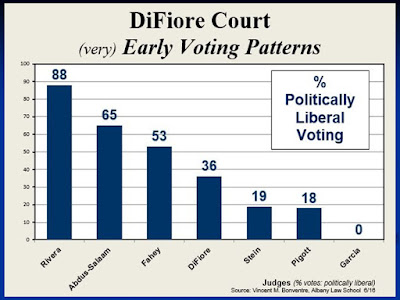 [Based on divided decisions rendered as of mid-June on appeals heard by the Court since the February session--the first with DiFiore as Chief Judge. "Politically Liberal" is used as it is in common parlance and as is traditional in judicial studies, e.g., pro-due process vs pro-crime control, pro-accused vs pro-prosecution, pro-worker vs pro-business, pro-injured plaintiff vs pro-civil defendant, etc. "Politically conservative" would be the opposite. There have been 17 non-unanimous decisions to date with clear liberal vs conservative positions.]

What is immediately obvious is that there is a clear ideological spectrum on the Court. At the least, what has emerged thus far in the very early DiFiore Court is clear.

Judge Rivera's voting places her at one end of the Court's spectrum, and Judge Garcia's at the other. Moreover, the contrast between their voting records is stark. In the 17 cases with distinct "liberal" versus "conservative" positions that divided the Judges, Rivera voted for the liberal position 88% of the time. Garcia never voted for such a position.
[Neither the graph nor this discussion are intended to suggest that "liberal" is good, correct, wise, etc. Or that "conservative" is the opposite. For ease of discussion, we will speak of liberal votes and voting. Conservative votes and voting are simply the opposite--e.g., 88% liberal = 12% conservative. Nevertheless, this post will conclude with a graph reflecting the same data, but with conservative percentages.]

To be sure, the ideological leanings of Judges Rivera and Garcia would not be terribly surprising to those who follow the Court. Rivera's previous experience and academic publications evinced an ardent liberal and critical perspective on legal and societal issues. Garcia, by contrast, is a Republican who worked in the administration of President George W. Bush, and who served as a federal prosecutor, including as the U.S. Attorney (for the SDNY), and developed a strong reputation for being tough on crime and corruption.

So, for example, Rivera sided with the accused in cases dealing with such matters as confronting adverse witnesses, incriminating evidence obtained through eavesdropping, guilty plea allocutions, DNA analysis, sex offender classification, ineffective counsel, and the powers of a special prosecutor, Garcia sided with the prosecution in all of those cases.

Notable also from these early patterns are the records of Judges Pigott and Abdus-Salaam. Pigott, the only Republican on the Court other than Garcia, has compiled a record closest to Garcia's on the Court's ideological spectrum. His 18% liberal voting record, reflecting only 3 such votes in the 17 divided cases, may not be as striking as Garcia's. But it still places him unmistakably on the far opposite, more conservative wing of the Court. His record, like Garcia's, stands in stark contrast to that of Judge Rivera--and in sharp contrast to that of Abdus-Salaam as well.

Indeed, Judge Abdus-Salaam's 65% liberal voting record is the closest on the Court to Rivera's. And although her record is not as overwhelmingly liberal as Rivera's, it nevertheless does place her unmistakably on the Court's more liberal wing. Among other things, that record reflects her voting with Rivera on some of the issues previously mentioned, including confronting adverse witnesses, incriminating evidence obtained through eavesdropping, and the powers of a special prosecutor--as well as in civil cases involving government tort liability, and excusing a late notice of claim.

As for the remaining members of the Court, Judge Stein's record of 19% liberal voting reflects the positions she took in 3 of 16 cases. [She did not participate in 1 of the 17 cases.] That record of only 3 liberal votes places her on the more conservative wing of the Court and, in fact, equals that of Pigott. But Stein's 3 liberal votes were not the same as Pigott's. She actually disagreed with him in 2 of them--one having to do with an accused's right of confrontation, and the other with ineffective counsel.

Judge Fahey's record places him on the more liberal wing of the Court. His 56% liberal voting is very similar to that of Abdus-Salaam, not only numerically, but substantively as well. They were typically on the same side of the divided decisions, both criminal and civil.

Interestingly, her record is identical to that of the Court as a whole. Although not shown on the graph above, this identicality results from DiFiore's being in the majority in every case thus far. Stated otherwise, she has not been in dissent in any case to date. Coincidentally, [Well, not really at all.] we will turn our attention to dissents--who's writing them, who's joining them, and how many--in the next post.

But before we conclude, here is a graph reflecting all the same data we have been discussing, but displayed in terms of conservative voting percentages: 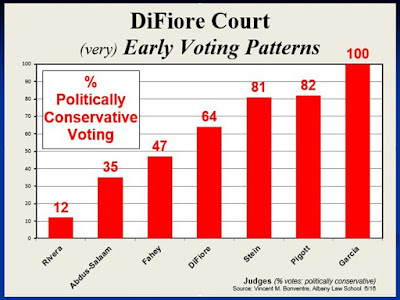 Again, as just mentioned, the next post will deal with dissents in the (very) early DiFiore Court.