The Court of Appeals has a back and forth recent history on dissents. Chief Judge Judith Kaye said she was not a big fan. Her successor, Jonathan Lippman welcomed them.

Kaye sought to avoid fractured decisions and unpleasant divisions by encouraging consensus. Lippman welcomed dissenting views that pushed the majority to address real disagreements among the Judges. Kaye preferred the Court to speak with one voice. Lippman favored clarity and boldness rather than reaching some blurry common ground.
[My agreement with Chief Judge Lippman may be evident. In any event, I have made my view on the matter pellucid--love that word. One of the finest NY Times pieces on the Court of Appeals, written by one of the finest legal journalists of our time, explores this very topic, see William Glaberson's "Dissenting Often, State’s Chief Judge Establishes a Staunchly Liberal Record," Oct. 9, 2011.]

Now what about Chief Judge Janet DiFiore and her Court? Embracing the Kaye or the Lippman view?

Let's first see who has been dissenting--both writing and joining dissenting opinions--since DiFiore took the center seat in February. Take a look: 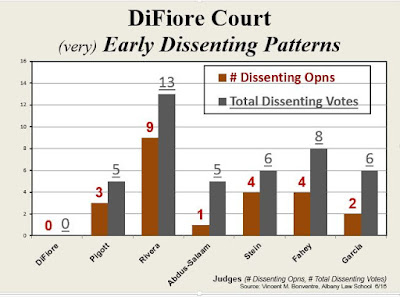 Once again, as we saw with ideological voting patterns [See Part 1], Judge Jenny Rivera's record stands out. She has been the most prolific author of dissenting opinions (9), and the most frequently dissenting voter (13).

Beyond that, in every one of Rivera's dissenting opinions and votes, in cases with distinct ideological positions, she supported the "liberal" side of the issue. (E.g., in criminal cases: pro-due process vs pro-crime control, pro-accused vs pro-prosecution; in civil cases: pro-worker vs pro-business, pro-injured plaintiff vs pro-civil defendant, etc.)

Notably, Rivera was alone in 5 of her dissenting opinions. That is more than the total number of dissenting opinions written by any of the other Judges. In those cases where she was together in dissent with another Judge--in her opinion or theirs--she was most frequently together with Judge Sheila Abdus-Salaam (3 times). On the other hand, she was never in a dissent with Republican, Pataki-appointed, Judge Eugene Pigott, whether she or he or someone else wrote the opinion. She was, however, joined in 1 of her dissenting opinions by the other Republican, but Cuomo-appointed, Judge Michael Garcia. [Significantly, that opinion, which brought together those two ideologically opposite colleagues, argued for application of the attorney-client privilege in a case which did not entail distinct liberal versus conservative positions.]

At the other end of the dissenting-frequency spectrum is the Chief Judge. To date, DiFiore has neither written a dissenting opinion nor joined one authored by anyone else on the Court. Viewed from a different perspective, all of her opinions thus far have been either unanimous or majority, and she has never voted on the losing side of a case.

After Rivera, the most frequent dissenter on the Court has been Judge Eugene Fahey. As with Rivera, Fahey was not averse to authoring sole dissenting opinions (3). Very interestingly, in one of those sole dissents, he sided with the prosecution in a case involving the rape of a minor. In another, he sided with a minor suffering from lead-poisoning in a lawsuit against a landlord. In the third, he sided with seasonal workers whose per diem wages were reduced. Each of those dissents reflects a particular compassion for children and other vulnerable persons that has been a hallmark of Fahey's judicial career. [See Judge Fahey's Tendencies.]

Also notable are the dissenting records of the two previously mentioned Republicans on the Court. Of Pigott's 3 dissenting opinions and Garcia's 2, they joined each other 4 times. To date, that is the highest dissenting agreement on the Court. Moreover, 3 of those cases involved distinct ideological positions, and Pigott and Garcia took the clearly conservative, pro-prosecution side in each of them.

Before closing, let's take a look at the recent history of dissents at the Court, and how the early record with DiFiore as Chief Judge compares with that of the Court under her 3 immediate predecessors. First, here is a graph of the annual number of decisions with dissent, beginning with the last years of Chief Judge Sol Wachtler's tenure; then the early, middle and final years of Kaye's tenure; and ending with the early years of Lippman as Chief Judge: 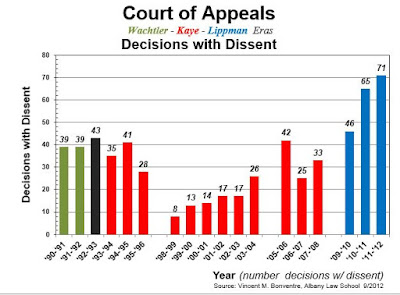 As shown in the graph, the number of non-unanimous decisions remained fairly stable from the end of Wachtler's tenure through the first few years of Kaye's. Shortly thereafter, however, the number dropped precipitously (following then-Governor Pataki's public criticism of the Court for being too "liberal"), and it stayed quite low for several years. The number later rose somewhat in the final years of Kaye's tenure (when a majority of the Judges were Pataki appointees), and it then rose dramatically when Lippman became Chief Judge (and welcomed dissents as beneficial).

For a more visually digestible look at the same data, here they are reorganized as annual averages over several 3-year periods: 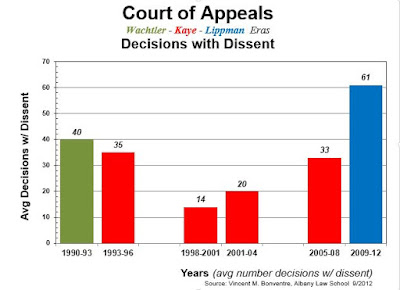 Again, the changes and trends over the years in the number of decisions with dissent, from Wachtler to Kaye to Lippman, are clear and, in fact, clearly dramatic. But our focus in this series is on the early DiFiore Court. So what about that Court? How does it fit in this scheme?

Well.....the total number of decisions with dissent to date in the DiFiore Court is 23. (I.e., Pigott's 3 dissents + Rivera's 9 + etc. = 23.) Projecting that number by approximate extrapolation would equal a total of 52 non-unanimous decisions for a full year. (I.e., 23 dissents is the number for 18 session days of arguments from which cases have already been decided, out of the 43 such session days scheduled for the entire 2016 calendar year. So doing the grade school math gives a ballpark projection: 43/18 x 23 = 52.)

Now, juxtaposing that ballpark projection into the graph gives the following: 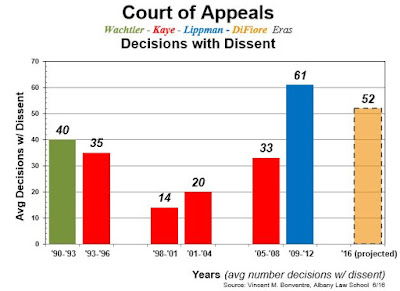 At the least, what can be concluded at this very early point in the DiFiore Court is that the number of decisions with dissent already exceeds that of the annual total for much of the Kaye era. In fact, unless the pace of dissents screeches to a halt, the number of non-unanimous decisions in the first year of the DiFiore Court will far exceed that of any year while Kaye was Chief Judge. Likewise, unless the pace slows considerably, the annual number will exceed the numbers for the Wachtler era.

On the other hand, the pace of dissents would have to accelerate for the DiFiore Court in its inaugural year to match the numbers reached while Lippman was Chief Judge.That might, of course, happen. But the pace may even slow. Who knows at this point?

What we do know, however, and what the raw data does tell us, is that the Judges of the Court are dissenting--a few of them with some fair regularity. Indeed, there would need to be an abrupt and dramatic change in the culture of the Court, which was nurtured by Chief Judge Lippman throughout his 7 year tenure, for there to be a significant reduction in the number of non-unanimous decisions in the early months or even years of the DiFiore era.

Next in this series, we will look at some of the notable--important and revealing--opinions of each of the Court's 7 Judges.