In the last post, we looked at the voting patterns of the Court of Appeals Judges in criminal cases. We now turn to the civil appeals.

In the first 6 months of Janet DiFiore's tenure as New York's Chief Judge, the state's highest court divided in 13 non-criminal decisions. Of these, 8 had a clear ideological split. That is, the disputes involved tenant versus landlord, worker versus employer, patient versus hospital, consumer versus, manufacturer, and the like--traditional liberal/pro-tort plaintiff versus conservative/restrictive liability confrontations.

To be sure, a question naturally arises about the reliability of any conclusions drawn from a relatively small pool of cases. Actually, however, the fact that the Judges aired their disagreements infrequently might well suggest that those few disagreements that they did choose to air were deeply felt. The dissents (or substantive concurring opinions) in these 8 cases might well signify particularly strong views of the authors.

Beyond that, some voting records may be so pronounced, even though the pool of cases is relatively small, that the patterns may be somewhat confidently extrapolated. Records that are ambiguous, because not clearly evincing a pattern, may tell us little. But a record that is absolute or especially one-sided likely reveals the Judge's strong leanings and deeply held perspectives on the issues.

So let's look at the Judges' voting records in these 8 divided civil decisions and see what if anything they reveal: And here is the flip-side of those same records: 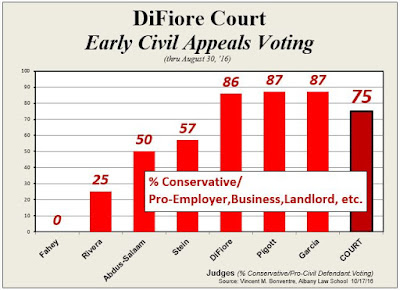 What immediately stands out is the 100% (or 0%) record of Judge Eugene Fahey. Voting the same way in every case. He participated in 6 of the 8 cases and, in each of those cases, he sided with the party complaining of being injured by the negligence or wrongdoing of a landlord, employer, health professionals, or other civil defendant. Moreover, in 3 of those 6 cases, he publicly took issue with the majority of his colleagues in a dissenting opinion. There is no mistaking Fahey's passionate leanings in these kinds of cases.
(We saw a similar very sympathetic perspective toward victims in Judge Fahey's record at the Appellate Division. See Judge Fahey's 'Tendencies.')

As might well be expected from Judge Jenny Rivera's strongly liberal record in criminal cases, her record is strongly liberal in these civil appeals as well. She participated in all 8 cases, and she sided with the complaining injured party in 6 of them. In 2 of those she authored a dissenting opinion. In one she was by herself, [Fahey did not participate in that one.] In the other, she was in the 4-3 minority,

At the other end of the Court's civil appeals spectrum are Chief Judge Difiore, and Judges Eugene Pigott and Michael Garcia. [DiFiore's figure is slightly different because she did not participate in one of the cases.] Their records may not be quite as categorical as Fahey's. But they are nearly so.

DiFiore, Pigott, and Garcia each voted for the civil defendant--i.e., the landlord, employer, hospital, etc.--in every case but one. Beyond that, in the 3 civil appeals that were decided by a 4-3 vote--where they were part of the majority and, thus, a switch by any one of them would have changed the outcome--all three of them voted against the complaining injured party.

The remaining two Judges, Sheila-Abdus-Salaam and Leslie Stein, have voting records siding some of the time with the injured party and some of the time with the civil defendant. In fact, Abdus-Salaam's votes were divided equally, and Stein's votes almost so. [Stein did not participate in one of the cases.] On the other hand, though their numbers may be similar, they did not necessarily vote together in these cases. Indeed, they were on opposite sides in 3 of the 7 cases in which they both participated.

Finally, for those who like to see all the data in one neat, though noisy, package, here's that single graph: 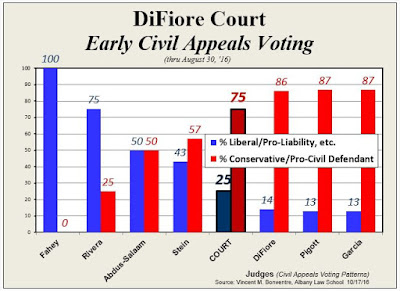 In the next post, we'll conclude with some overall observations.