Let's see what can be gleaned from the facts and figures presented in the previous posts in this series. To be sure, some of what we've seen, especially when displayed graphically, has been quite stark. So what conclusions can be drawn about New York's highest Court since Janet DiFiore became Chief Judge? What observations can be offered about the early DiFiore Court of Appeals?

Let's start with majority voting. We've previously looked at how frequently each of the Judges voted in the majority in those closely divided, 4-3 decisions. (See Part 2 and Part 3.) As noted then, these cases are especially revealing. Any Judge voting in the very bare majority in those cases could have changed the Court's decision by changing sides. In short, each of those majority Judges cast a decisive vote.

Here, in a less cluttered graph, is what we saw: 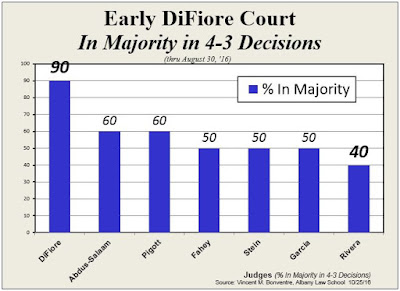 The Chief Judge voted in the majority in 90%, or 9 out of 10 of the 4-3 decisions rendered by the DiFiore Court to date.
(Although the data was specifically gathered for the first 6 months of DiFiore's tenure--covering the cases considered by the Court starting with its February 2016 session and decided in its March through August decision days--the data is actually accurate through the October 20 decisions.)

These figures strongly suggest that the Chief Judge was creating, or at least helping to create, majorities. They show that she was not simply joining the majority, because there was no majority in those cases without her vote.

Let's now look at all those cases where at least 2 Judges dissented--i.e., either by dissenting or by disagreeing with the majority on a significant substantive matter in a separate concurring opinion. These are the cases where the issue was sufficiently close, the competing arguments sufficiently strong, to split the Court 4-3 or 5-2 (or 4-2, in those cases where one of the Judges did not participate): 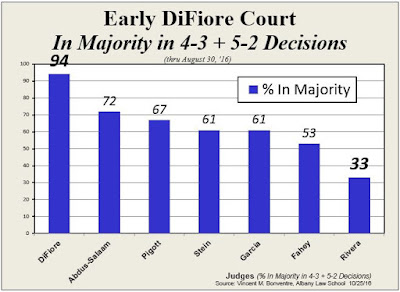 In this total of 18 cases, the spectrum is virtually the same. The Chief Judge is at one end with 94% (i.e., in the majority in each of the 16 cases in which she participated but 1). The closest to her is Judge Sheila Abdus-Salaam with 72% (i.e., in the majority in 13 of the 18 cases). At the other end of the spectrum, as she was when looking strictly at the 4-3 cases, is Judge Rivera, with 33% (or 6 of 18 cases).
(To repeat myself on a truism that I would hope is entirely unnecessary to restate: being in the majority and being in dissent do not equate with being right and wrong, wise and foolish, a better or poorer judge. Indeed, the "great dissenters"--whether at the Court of Appeals or the Supreme Court--are among the finest judges and justices in the history of each of those courts. But that's not the point of this discussion about majorities.)

To complete this examination of Judges in majorities, let's look at the figures when every divided decision is considered--where at least 1 Judge disagreed with the majority in a dissent or separate concurring opinion: 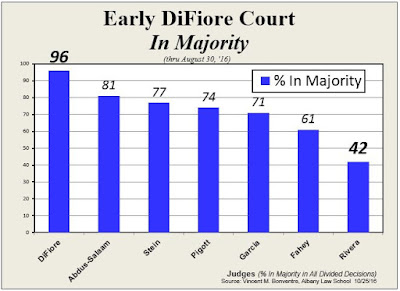 The spectrum remains virtually unchanged over this total of 31 divided decisions. The numbers are a bit different, but the position of the Judges on the spectrum has remained mostly the same whether looking at split decisions with 3 or 2 or 1 Judge disagreeing with the majority. The Chief Judge has been in the majority in every divided decision (and that means every decision period) except for one, i.e., 25 out of 26 or 96%. She is followed by Judge Abdus-Salaam with 25 out of 31 or 81%. Judge Rivera was in the majority the least, i.e., 13 out of 31 or 42%.

What we are seeing is truly a DiFiore Court, or at least a DiFiore-Majority Court.

Finally, in addition to telling us that the Court is in sync with the Chief Judge (and [or?] vice-versa), the figures and the spectrum we've been seeing reveal a good deal more. Let's start with just one--the single case in which Chief Judge DiFiore was not in the majority, People v. Berry (6/14/16). Here's the lineup in that 4-3 decision:

To those who study the Court, the lineup itself--without any regard whatsoever for the specific issue in this criminal case--is a veritably foolproof indicator of how the Court ruled, i.e., whether in favor of the prosecution or the defendant.

The Judges whom the Chief Judge joined in dissent were Eugene Pigott and Michael Garcia. That's pretty strong indication that the dissent favored the prosecution. On the other side of the divide, the majority included Judge Rivera. Her vote--and even more so because joined by Judges Abdus-Salaam and Fahey--very strongly suggests that the majority supported the defendant.

Sure enough, that's exactly how the majority voted and the case was decided.
(For those who want to be reminded what the ruling in the case was: the evidence was insufficient to prove that the defendant had the requisite control over the children to be guilty of permitting them to be in the apartment with illegal drugs.)

So, the only case in which the Chief Judge was not in the majority was decided in favor of the defendant. And in that one case, the pro-defendant majority included Judge Rivera, who has been in the majority the least of any member of the Court. What does that tell us about the early DiFiore Court in criminal cases?

We'll take that up next.