By my count, New York's highest Court last calendar year decided 31 criminal appeals in signed opinions. These, presumably, are the cases the Court deems sufficiently significant to require an opinion fully elaborating the majority's position on the issue(s) decided. They, therefore, do not include the unsigned decisions in a memorandum, where the analysis is typically much less comprehensive and, indeed, quite abbreviated most of the time.

Also in 2017, there were 17 decisions in criminal appeals where the Court was divided. In these non-unanimous cases, at least one of the Judges openly disagreed with the majority, either in a dissenting opinion or in a separate concurrence taking issue with the rule of law adopted or as applied by the majority.

By virtue of the Court of Appeals' position atop a mammoth judicial branch that handles, literally, a few million cases a year, those cases that do reach the high court are almost always the ones that are especially significant. Moreover, they are--again, almost always--the ones that are close enough to present strong arguments on both sides. A fortiori, this is particularly true where the Judges on the high court cannot agree on a disposition. Where at least one of the Judges feels strongly enough about the importance of the case that a public disagreement is justified.

So, as has been explained countless times over the years by judicial scholars--as well as by me, in this blog and elsewhere--these non-unanimous decisions are the most revealing. For that reason, let's focus on those in examining the decisional and voting record of the Court of Appeals in criminal cases.

Here's the breakdown in those close cases for the entire calendar year 2017: 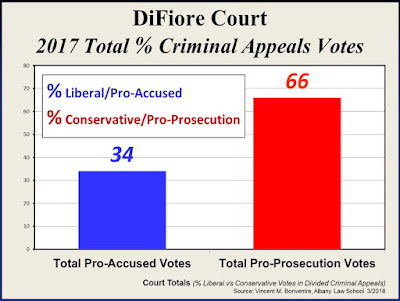 As the graph shows, there were nearly twice as many votes for the prosecution than for the accused. While that mere comparison is significant, it becomes even more so when considering that these are the close cases that reach the Court of Appeals. More than that, these are the ones that are so close that there is open disagreement among the Judges. In short, in the closest of the close cases, voting at the Court of Appeals in 2017 was very strongly pro-prosecution.

Let's now look within those total votes. What about the voting of the individual Judges and the decisional record of the Court as a whole. Here it is:
(click on graph to enlarge) 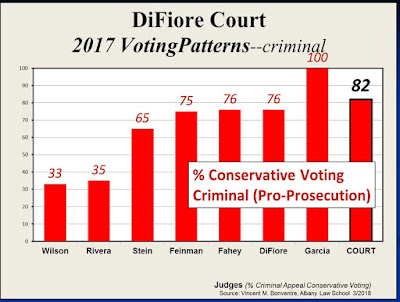 As this graph shows, the Court's decisional record for 2017 was exceedingly pro-prosecution. Again, keep in mind that this is true despite the fact that these are the very close cases where there were strong arguments on both sides. The Court could legitimately have adopted the position of either side. And yet, overwhelmingly, the Court adopted the position that supported the prosecution--82% of the time by these calculations.

Here's the same graph from the pro-accused perspective:
(click on graph to enlarge) 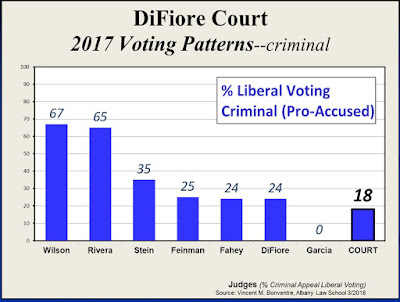 So, in these close cases--again, where the Court could legitimately go either way--the Court supported the accused's position very infrequently. As the graph shows, beyond the record of the Court as a whole, only Judges Jenny Rivera and Rowan Wilson have voting records that evince particular sympathy for arguments raised by the accused on appeal in these close cases. At the other end of the spectrum is Judge Michael Garcia, who never sided with the accused on issues that divided the Court.

But right or wrong, wise or foolish is not the point here. What is the point is the unmistakable, very pro-prosecution record of the Court this past year.