As we near the end of the Supreme Court's term ("October 2017" or 2017-18 year), it's worthwhile to consider the likely impact of the newest Justice. The Republican-controlled Senate's refusal to consider President Obama's nomination of Judge Merrick Garland, and its subsequent confirmation of  President Trump's nominee, Judge Neil Gorsuch, at the very least meant that Republican appointees would be in the majority. 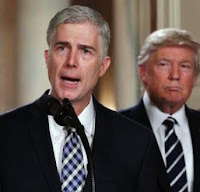 Following Justice Antonin Scalia's death in 2016, the Court was split 4 Democratic appointees to 4 Republicans. Scalia's absence and the resulting split were reflected in the decisional output of the Court's term that year, with several 4-4 splits in important cases and some very narrow rulings in others.

To be sure, the usual nonsense was repeated at the Senate confirmation hearing from Gorsuch's supporters. You know, he is "mainstream," he will "apply the law, not make it," he will "not make policy from the bench," he will not let his personal views influence his votes, he has no agenda, blah, blah, blah. Of course that's pure nonsense. This is not a Republican charade. The Democrats insist the same thing when supporting a Democratic nominee.

But the focus here is on Gorsuch. And about his likely impact on the important decisions that will be announced as the Supreme Court's term comes to an end the next several weeks.

Let's recall his record as a federal appellate judge on the 10th Circuit prior to his appointment to the Supreme Court. It is an extremely politically conservative record--we're not talking about some sophisticated judicial philosophy. (For a more comprehensive examination, see the 6 part series in New York Court Watcher last year that concluded with Gorsuch, Part 6: The Now-Justice Like the Then-Judge.)

A quick review of some representative highlights of his opinion record--or low-lights for those with different political leanings--leaves little doubt that Gorsuch is a conservative ideologue.

Death Penalty
In Elzember v. Trammell (2016), he wrote the majority opinion for the 3-judge panel, upholding the sentence despite a juror who had made clear a strong preference for the death penalty over life imprisonment; both the concurring and dissenting judges disagreed with the lax scrutiny applied by Gorsuch.
In Allen v. Workman (2012), he voted in dissent against the court's en banc decision to stay an execution until the prisoner's habeas corpus petition could be heard.

Hmmmm, connect the dots. Whether or not one agrees with the positions Gorsuch took in these cases, what cannot be denied is the pronounced politically conservative character of this record.

Next, we'll review the record he compiled in a few short weeks on the Court following his appointment last year.