(Crazy busy the last several weeks, but now back.)
The last time, we looked at the CLA figures for fall 2016 through summer 2017--i.e., the number of criminal leave applications granted by each Judge during that period. It was the most recent period for which I could confidently corroborate the data. (See last post.) Since that post, I've been able to corroborate the figures for the entire 2017 calendar year.


Here are those 2017 calendar year figures with some perspective: 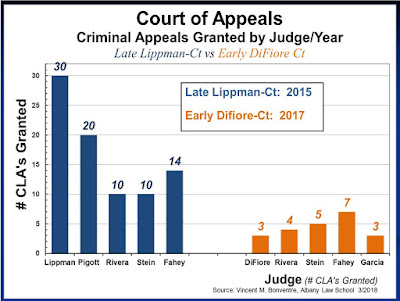 This graph shows the CLA grants for each Judge in the last year of the Court under Chief Judge Jonathan Lippman contrasted with those for the first full calendar year under Chief Judge Janet DiFiore. I'm not sure anything needs to be added to what the graph itself shows about how striking that contrast is.
(The graph includes only those Judges who were on the Court for all or virtually all of each respective year.)

The figures do not reveal why the number of CLA grants has dropped so precipitously--yes, other than the simple fact that the Judges are not granting as many. But the data over the years does reveal that this is not the first time such a drop has occurred. Take a look:
(click on graph to enlarge) 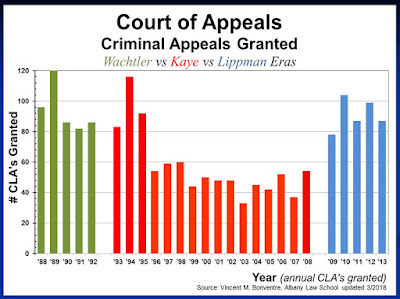 Here are those same figures in a less cluttered graph:
(click on graph to enlarge) 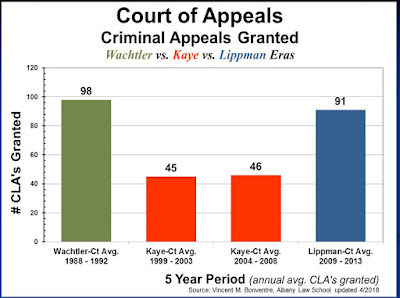 Averaging the years makes the contrast even clearer. In short, the CLA grants during both the Wachtler and Lippman eras at the Court were double that of the latter 10 years of the Kaye era.

Now let's insert the total CLA figures for 2017 to give them added perspective:
(click on graph to enlarge) 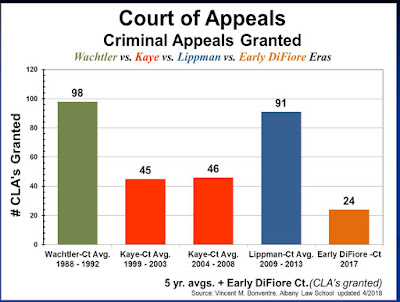 Again, the figures do not explain why the number of CLA grants has dropped so drastically, but they do show that the drop has indeed been drastic.
(N.B. the 2017 figures reflected in the graph are total: they do include the CLA grants for all the Judges, whether they were on the Court for all or part of the year.)

While the raw data does not explain the reduction in CLA grants, it does reveal a drop that is so dramatic that it is very hard to believe that it is mere accident and not the result of either a deliberate change in policy or some other significant phenomenon. The figures for 2018--whether they remain similarly low or they increase--may provide some insight, especially when viewed with other profiles and patterns.