(Today's "travel ban" decision was another pathetic partisan divide. The 5 Republicans vs the 4 Democrats. We'll discuss that next. But first, this privacy/search & seizure milestone.) 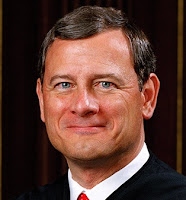 The Supreme Court ruled this past Friday that when government tracks a person's movements and whereabouts--in this case for 4 months, using cellphone location data--that is a search. Speaking through Chief Justice Roberts' majority opinion in Carpenter v. U.S., the Court held that government must (except, for example, in an emergency situation) obtain a warrant, supported by probable cause, before it may engage in such a comprehensive technological scrutiny of someone's private life.

Well, you might think so, and the Supreme Court now agrees. Yes, now, and by a mere 5-4 vote!

Chief Justice Roberts was the deciding vote in Carpenter. He joined the Court's 4 liberals (Justices Ginsburg, Breyer, Sotomayor, and Kagan) and he assigned himself the opinion for the resulting majority. His opinion was a milestone. Not only for the particular result in the case--to repeat, government must get a warrant supported by probable cause in order to track a person's movements through cellphone location data. But also because Roberts re-invigorated one of the Court's foremost privacy-protecting landmarks. And because he declined to apply the Court's privacy-limiting precedents.

As for the 4 dissenting Justices, they all authored their own opinions presenting different arguments why Roberts and his majority were wrong.

[We've discussed at length in New York Court Watcher the nonsense--and dangerous nonsense at that--of the Supreme Court's search and seizure jurisprudence that has developed over the past few decades. It has developed largely in order to avoid excluding evidence obtained from unconstitutional searches. So the Court has disingenuously ruled that many searches are not really "searches" and, therefore, that they are not subject to constitutional protections.
A police helicopter hovering over your backyard to search your property--that's not a "search." A search of your private property away from your house--that's not a "search." A search of all the contents of your garbage put out for pick-up--that's not a "search." A search by police canines sniffing your body--that's not a "search." And lots more. No, none of these are "searches" according to Supreme Court decisions
Consequently, in such "not-a-search" situations, the 4th Amendment's prohibitions against unreasonable searches and seizures just don't apply. The government need not get a warrant or have probable cause or even have some reasonable suspicion. No, nothing! No justification whatsoever is required for these searches under the Constitution because, the Court has told us, they are not really "searches."
Yes, it's hard to believe until you actually read these decisions.
(See Supreme Court: Right on GPS Surveillance--But BEWARE! (part 1); The GPS Decision--part 2: Scalia's Dangerous Nonsense & Alito's Rebuttal; The GPS Decision--The Video)]

The 4th Amendment of the Constitution protects against "unreasonable searches and seizures." In furtherance of that protection, it declares that "no Warrants [to conduct searches or seizures] shall issue, but upon probable cause." In it's 1967 landmark decision in Katz v. U.S., the Supreme Court ruled that the 4th Amendment "protects people, not places." That amendment, the Court elaborated, was intended to protect the legitimate privacy interests that people have in a free society--not the limited items that happen to be specifically mentioned in that amendment.

The Court in Katz was adopting the view expressed in one of the most famous dissents in Supreme Court history, authored by one of the truly great Justices in that history--the dissent of Louis Brandeis in Olmstead v. U.S. (1928). The majority in Olmstead  held that the Constitution provided no protection against government eavesdropping on the defendant's private phone conversations. No warrant needed. No probable cause needed. The reasons? Conversations are not one of the "tangible' or "material" "things" specifically mentioned in the 4th Amendment. Also, the outside telephone wires that the government tapped belonged to the telephone company, not to the defendant.

Brandeis rejected that reasoning. He argued, in these oft-repeated lines, that the Constitution "conferred, as against the Government, the right to be let alone -- the most comprehensive of rights, and the right most valued by civilized men. To protect that right, every unjustifiable intrusion by the Government upon the privacy of the individual, whatever the means employed, must be deemed a violation of the Fourth Amendment." Nearly 40 years later, in the Katz landmark, the Court overruled Olmstead and similar decisions, and it embraced Brandeis's view of protected privacy. Henceforth, all government intrusions upon legitimate expectations of privacy would have to be justified--by probable cause supporting a warrant.

In the decades that followed Katz, as "law and order" Justices were being appointed and the Court was retrenching from decisions that were protective of the rights of the accused, the Court variously and persistently diluted that landmark. So, for example, the Court adopted the so-called "third party doctrine." In short, if you allow someone else to have information about you--e.g., your bank has records of your transactions and your phone company has records of the numbers you've called or which have called you--then you have no Katz privacy rights in that information, even from a government investigation. And so the 4th Amendment provides no protection.
(I'm not saying that follows logically, but only saying that's what the Court has ruled.)

Then there's the curious reemergence of (what I will call) the "not specifically mentioned doctrine" and, relatedly, the "trespass doctrine." In these latter dilutions of Katz--actually breaks from it--the Court has insisted, for example, that while the 4th Amendment specifies "houses" for protection, it does not mention the private property beyond a house. So there is no 4th Amendment protection for the deceptively labelled "open fields"--i.e., actually any private property a homeowner has beyond the immediate area of the home itself. The Court has also insisted that the 4th Amendment is really about property rights and about preventing the government from "trespassing"--i.e., physically invading without permission--upon one of your "tangible" "things" that are mentioned in that amendment. So, only nonconsensual invasions of your person (body), house, papers (documents), or effects (personal property). No "trespass" on one of those? Then no 4th Amendment protection.

Sooooo, under the "third party doctrine," since you've "allowed" your bank and your phone company to have records about you, the government doesn't need a warrant or probable cause--or any other justification--to search your records. Also, because your private property beyond your house is not mentioned in the 4th Amendment, the same thing. And as long as the government does not "trespass" upon you or your car (which is an "effect" or personal property), apparently no warrant or probable cause is required to conduct unlimited surveillance on your comings and goings.

That's was state of 4th Amendment search and seizure jurisprudence when the Court was deciding the cellphone location data issue in Carpenter.

So how exactly did Chief Justice Roberts reach the result he did for the Court's majority? Here's an outline of the critical highlights:

As for the 4 dissenters:

So there it is. I know this was a bit long and detailed. But this decision is so vitally important for fundamental privacy protection amidst such extraordinary and extraordinarily rapidly advancing technology.

As far as the Supreme Court itself is concerned, the significance of this case includes being decided by a bare majority, Chief Justice Roberts being the deciding vote, his siding with the 4 liberal Justices, his rejecting the application of older precedents to answer a modern technological question, his even rejecting a recent majority opinion--by Justice Scalia--that sought to resurrect an old view of the 4th Amendment, and his leaving no doubt that the privacy concerns expressed in Brandeis's dissent in Olmstead (not the Court's decision in that case) and later adopted in Katz are the governing principles of the 4th Amendment.

As for the dissenters, Justices Kennedy and Alito argued in favor of applying previous decisions of the Court that would have precluded the reach of Katz to this case and, presumably, to other analogous intrusions made possible by advancing technology. Justices Thomas and Gorsuch would abandon Katz--largely or entirely--and would restrict 4th Amendment protections to its original or literal limits, regardless of the changed realities of the modern world.

So one vote made the difference. A departure of one of the liberal Justices--and the retirement of the elder Ginsburg or Breyer in the not too distant future is certainly a possibility--or even of the Chief Justice, would likely result in the Court's narrowing of the Carpenter decision. A fortiori if the departing Justice is replaced by the current President or by a conservative successor. In fact, if such were to occur, it is likely that those antiquated "third party" and "trespass" and "not specifically mentioned" doctrines would be rehabilitated and applied to constrict constitutional privacy protections.

That thought--at least to me--is dismaying. But for today, the Carpenter decision is cause for celebration and some hope.