(The travel ban decision or Kennedy's retirement? A wonderful student I bumped into yesterday suggested addressing the retirement first. So here goes.)
This post was updated  the following day to correct the omission of Kennedy's dissenting vote in the Obamacare case.

Anthony Kennedy, who announced last Wednesday that he will retire from the Supreme Court, was President Reagan's 3rd choice to fill the vacancy created when Lewis Powell took his leave in 1987. Reagan was mortified and angered when his first two nominations, Robert Bork and Douglas Ginsburg, were unsuccessful. Only then did he settle on Kennedy.

Staunch conservatives in Reagan's administration, who had urged him to nominate Bork and Douglas, were adamantly opposed to the seemingly more moderate Kennedy. Among other specific reasons--as shared to me in very crude terms--was that Kennedy would support gay rights. 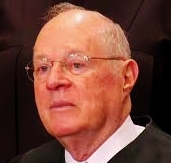 And indeed he did. Yes, he not only voted repeatedly against sexual-orientation discrimination and in favor of advancing equal treatment for gays and lesbians and same-sex couples, but he authored the landmark opinions in most of those cases, and he did so in soaring, heartfelt language.

Kennedy is most often thought of in terms of the positions he took in these and other culturally-charged cases. And he was warmly embraced by liberals for his willingness to break from the conservative Republican mold in these cases. But for the same reason, he was scorned and even despised by many on the right. Not only socially conservative politicians and commentators and members of the public, but also some of his colleagues on the Court would denounce his jurisprudence, ridicule his opinions, and cast aspersions on the integrity of his judicial analysis. The late Justice Antonin Scalia, for example, often fumed at Kennedy's opinions and left little doubt that he did not hold Kennedy or his judicial competence in particularly high esteem.

That, in turn, made Kennedy even more of a hero to political liberals.
(Disclosure: I admired Justice Kennedy, both for his positions on gay rights and other social issues, and for his behaving like a judge--i.e., not always towing the partisan political line like most of his colleagues do on the Court, both Republicans and Democrats.)

But, we need to put that in context. Justice Kennedy was no liberal. That may be good, bad, indifferent, or something else. But in assessing Kennedy's record and, thus, what the Court is losing by his retirement, let's get real.

Kennedy was a conservative. Again, good, bad, indifferent, or something else, he was a conservative who voted on most issues like a politically conservative Republican. Not always. And not on some extremely important and controversial social issues. But yes, most of the time.

Let's consider Kennedy's record on some important issues:
Presidential Election
Kennedy voted in the 5-4 majority, in Bush v. Gore (2000), to halt the counting of votes and insure George W. Bush's election.
Obamacare
When the 5-4 majority, led by Chief Justice Roberts in National Federation v. Sebelius (2012), saved the Affordable Care Act by upholding the individual mandate, Kennedy voted with Scalia, Thomas and Alito in a joint dissent.
Trump Travel Ban
Most recently, he voted in the 5-4 majority, in Trump v. Hawaii (2018), to uphold President Trump's 3rd attempt to ban travel into the United States from several designated countries, most of them majority Muslim.
Campaign Finance
Kennedy is the one who authored the majority opinion, for the 5-4 decision in Citizens United v. FEC (2010), that invalidated the limits on corporate expenditures on political communications.
He then voted in the 5-4 majority, in McCutcheon v. FEC (2014), to invalidate the limits on the aggregate amounts that can be contributed to political candidates and parties.
Gun Rights
He voted in the 5-4 majority, in D.C. v. Heller (2008), to hold that the 2nd Amendment guarantees an individual right to bear arms separate from a state militia.
He then voted in the 5-4 majority, in McDonald v. Chicago (2010), to hold that the Heller individual right to bear arms is fundamental and, thus, applies to the states as well as the federal government.
Voting Rights
A few years ago, he voted in the 5-4 majority, in Shelby County v. Holder (2013), to invalidate those sections of the Voting Rights Act of 1965 that required jurisdictions with a history of voting discrimination to obtain a pre-clearance from the Justice Department when changing their voting laws.
Just recently, Kennedy authored the 5-4 majority opinion, in Husted v. Philip Randolph Institute (2018), approving Ohio's program to actively cancel the registration of voters who have not recently participated in some election activity.
Employer-Employee Relationship
This past term, he voted in the 5-4 majority, in Epic Systems v. Lewis (2018), to approve employer conditions that compel workers to submit their grievances individually to arbitration.
Most recently, he voted in the 5-4 majority, in Janus v. AFSCME (2018), to invalidate state laws that required nonmembers of a public sector union to pay "agency fees" or "fair-share" dues to help cover the union's cost of collective bargaining and other representation on the nonmembers' behalf.
Search & Seizure & Privacy
A few years ago, Kennedy authored the majority opinion, for the 5-4 decision in Florence v. County of Burlington (2012), that approved strip searching a driver, who had been arrested for a minor traffic offense, when that minor offender was placed in a jail cell during "processing--supposedly  to insure safety and discipline, even though there was no suspicion of drugs, weapons, or other contraband. Actually, 2 separate strip searches of that "offender" at 2 different jail cells were approved. Oh, the fact that the "offender" was totally innocent was apparently irrelevant.
That decision had been foreshadowed several years earlier, in Atwater v. Logo Vista (2001), in which Kennedy voted in the 5-4 majority to uphold the arrest, the handcuffing, the frisking, the searching, and the jailing-during-"processing" of a woman for a seat belt violation--i.e., her children had undone their seat belts while she was driving. Again, there was no suspicion of drugs, weapons or other contraband.
[These, in my view, are among the very worst decisions of the modern Court. And Kennedy was instrumental in creating a majority in both cases.]
Then there's the new 5-4 decision, in Carpenter v. U.S. (2018), in which Chief Justice Roberts authored the majority opinion holding that the government should have obtained a warrant before tracking a cellphone user's movements and whereabouts, over a 4 month period, by using his cellphone company's location data. Kennedy dissented, arguing that no warrant should be required.

Ok, that is not the record of a liberal Justice. Or even a centrist. Every one of those votes and opinions are what we would expect of a politically conservative Republican. And that is mostly the way Justice Kennedy behaved throughout his tenure on the Court.

That being said...Kennedy is best known--whether admired by liberals or reviled by conservatives--for his positions and even leadership on certain other issues. Social, cultural issues that, despite landmarks that might otherwise have settled them, are still front and center in our national political divide.

We'll take a look at that more liberal aspect of Kennedy's record, as well as some prospects for the Court with the forthcoming Trump-filled Kennedy replacement in the next post.