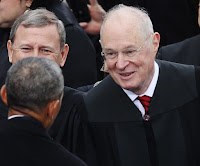 In the previous post, we reviewed Anthony Kennedy's votes and authored opinions in a wide range cases that deeply divided the Court. These were cases where the Justices split 5-4 along partisan political lines, and where the change in a single vote in the majority would have reversed the Court's decision.

What might well be unexpected to some--because Kennedy has been accurately viewed as a--or the--"swing vote" on some significant, controversial issues--is that his overall record has actually been that of a politically conservative Republican. Whether stopping the vote count in Bush v. Gore or invalidating restrictions on corporate campaign spending in Citizens United, or on diverse issues such as Obamacare, the Trump travel ban, gun rights, employer rights, voting rights, and search & seizure and privacy, Kennedy routinely joined with the other Republican Justices on the politically conservative Republican side of the issue. 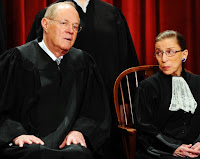 But Kennedy has largely been known--beloved and praised, or reviled and ridiculed--for the exceptions in his record. His "swing vote" legacy is built upon a few areas of the law. On some highly charged social and cultural issues, he broke from the Court's conservative Republican majority and joined with the liberal Justices. Indeed, with Kennedy gone and a Trump nominee forthcoming, these are the issues about which Democrats, liberals, and, on some, libertarians are most concerned.

Let's consider those:
Gay Rights
Kennedy's name, more than any other, will be associated with the Supreme Court's landmarks invalidating sexual-orientation discrimination and mandating equal treatment for gays, lesbians, and same-sex couples. The culmination of that line of cases, no doubt, was the 5-4 decision in Obergefell v. Hodges (2015). There, Kennedy joined the Court's four liberals and authored the majority opinion to invalidate laws that restricted marriage to heterosexuals and, concurrently, to recognize the right to marry for same-sex couples.
He similarly authored the majority opinion for the Court's 5-4 decision, two years earlier, in U.S. v. Windsor (2013), invalidating provisions of the so-called "Defense of Marriage Act (DOMA) that denied federal marital benefits to legally married same-sex couples.
Before those cases, he authored the majority opinions in Lawrence v. Texas (2003), invalidating laws that criminalized same-sex intimacy ["Homosexual Sodomy" in the late Justice Scalia's ad nauseam refrain.], and in Romer v. Evans (1996), invalidating a state law that specifically prohibited legal protection against sexual-orientation discrimination.
[In these cases, Kennedy confirmed the worst suspicions of the most conservative members of the Reagan administration who opposed the Kennedy nomination because he was a "gay lover"--the cruder term was used in private conversation with me.]

On the other hand, Kennedy did join the 5-4 decision, in Boy Scouts of America v. Dale (2000), allowing the Boy Scouts to exclude gays from leadership positions, on the basis of freedom of association, despite a state law prohibiting sexual-orientation discrimination.

Affirmative Action
Kennedy authored the 4-3 majority opinion [Only 7 Justices participated: Scalia had died and Kagan recused herself] in Fisher v. University of Texas (2016), approving and, thereby, saving the use of race as one of many factors in a university admission process, as a narrowly tailored means to achieve the compelling interest in student diversity.

On the other hand, thirteen years earlier, in Grutter v. Bollinger (2003), where a 5-4 majority had upheld the use of racial preferences in university admissions, recognizing the value of racial diversity in education, Kennedy dissented; he argued that the use of race should be subject to much closer judicial scrutiny and more limited than what the majority had allowed.
And a mere two years before Fisher, in Schuette  v. Coalition to Defend Affirmative Action (2014), Kennedy wrote the leading plurality opinion for himself, Roberts and Alito. [Also part of the Court's 6-2 majority was Scalia, who voted with the majority but wrote his own opinion joined by Thomas; and Breyer who authored his own sole opinion. Sotomayor dissented in an opinion joined by Ginsburg; Kagan did not participate.] Kennedy approved a state law (adopted in the aftermath of that Grutter decision) that prohibited the consideration of race (or sex) in university admissions, despite the undeniably racially-charged campaign to promote the passage of the law and despite the fact that the supposedly merit-motivated law left alone countless other factors used in the admissions process that have nothing to do with academic merit--e.g., athletics, legacy, family wealth and contributions, geography, etc., etc.
[In my view, this was a shamefully hateful law that obviously had nothing to do with academic merit--since countless non-merit factors were left untouched--and much about racial animus. IAE, the point here is that Kennedy approved it.]

Right to Choose/Abortion Rights
In the landmark 5-4 decision in Planned Parenthood v. Casey (1992), Kennedy joined Justice O'Connor's opinion to reaffirm Roe v. Wade and to establish the proposition that an "undue burden" on a woman's right to seek an abortion, prior to the viability of the fetus, was unconstitutional.
And more recently, in Whole Woman’s Health v. Hellerstedt (2016), Kennedy joined the liberals in the 5-3 majority [Scalia had died earlier in the term], invalidating Texas restrictions on abortion service providers because they imposed substantial burdens on the right to choose, without any actual health benefits.

On the other hand, in the most recent right to choose case, Nat'l Institute of Family and Life Advocates v. Becerra (2018), Kennedy joined the 5-4 majority opinion, authored by Justice Thomas, invalidating California's requirement that clinics providing pregnancy services advise patients about legal abortion options, deeming that to be a violation of free speech.

On the other hand, in that same year, in the badly splintered decision in Baze v. Rees (2008)--one plurality opinion, 4 concurring opinions, and a dissent--Kennedy joined Chief Justice Roberts' 3-Justice plurality opinion that upheld Kentucky's method of lethal injection, despite the occasionally improper administration which would result in an excruciatingly painful death. According to the Kennedy-joined plurality, the cruel and unusual punishment prohibition would be violated only where there was an intolerable risk that the infliction of pain was wanton and unnecessary.

To be sure, there are other areas of the law in which Kennedy's participation was welcomed by ideological liberals--sometimes and sometimes not. The point is that as a "swing vote" that provided liberals with a last hope on a decidedly conservative Court, Kennedy's record was, at least in that regard, a very checkered one.

As we saw in the previous post, Kennedy's record on many issues was indisputably--and very--politically conservative. And in this post, we saw that even in those areas where Kennedy "swung" to the liberal side of the issues, he was not necessarily a totally reliable vote.

The purpose in these two posts has only been to be clear-eyed about Justice Kennedy's record and about what will really be missing from the Court in his absence. It was not to criticize Kennedy. Indeed, as I have repeated numerous times, in my view Kennedy has been admirable. He has been the least politically, lopsidedly-partisan and ideological Justice on this Court.

In short, more than the other Justices, Kennedy seems to have behaved like a judge. The "swing vote" label, which he apparently did not like, reflected that he was not necessarily tied to one ideological, partisan side in the cases. He typically appeared to be open to vote with the other side of the Court's political aisle.

He will be missed by many Court watchers. Include me among them.