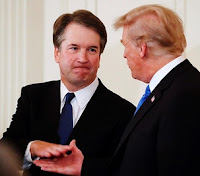 As we all now know, federal appeals court Judge Brett Kavanaugh of the D.C. Circuit was nominated for the Supreme Court this week by President Trump. To Republicans, he is apparently the greatest thing since sliced bread. To Democrats, he is apparently the prince of darkness. Well, like most of us, he's somewhere in the middle.
(His official biography is linked below.)

He is ideologically conservative. Maybe very much so. Maybe extremely so. To liberals--or  progressives or whatever we call ourselves today--his views are diametrically opposite. Anathema.

And this is not about judicial activism versus restraint. (Do conservatives--whose Justices in the modern era have been even more active than the liberals ever were in overturning the choices of the other branches and the states--speak in those terms anymore? Except perhaps the uninformed when speaking to the uninformed.)

Nor is it really about any interpretive methodology--i.e., strict versus loose construction, literalism versus consequentialism, originalism versus a living Constitution, etc., etc. Nor, relatedly, about the proper role of the judiciary in applying law versus making it. No, it's about the substantive issues.

Come on. Let's put the cards on the table. The substantive issues are what these nominations and confirmations have been all about. The talk about the properly restrained judicial role versus activist judges, etc. etc.--and also about credentials, qualified or unqualified--is the thinnest veil of what is really driving the support or opposition to a nominee.

So, for example, today it is really about a woman's right to choose, about gay rights, about religious exemptions from anti-discrimination laws and religion in the public arena, about gun rights, about affirmative action, about campaign finance, about racial and partisan gerrymandering, about voting rights, about worker protections versus business freedom, about rights of the accused, about privacy protections in the digital age, etc., etc.

That's what it's really about. But, of course, we don't get candor about that from a Supreme Court nominee or from the nominee's supporters. And we almost certainly will not get candor from nominee Kavanuagh or his Republican supporters. (We wouldn't --and did not--get that from Democratic nominees or their Democratic supporters either.)

Instead, we are sure to get lots of the routine, blah blah pablum about faithfully applying the Constitution, about simply interpreting the Constitution and other laws according to what they say and mean rather than one's personal views, and about not making policy from the bench because that is the province of the other branches. But little if anything of real substance about the actual substantive issues of the day--which is what everyone really wants to know about.

But answering such questions is dangerous for a nominee. The revelations might prove extremely unpopular or open other delicate areas for questioning. So the responses will either be finessed or the nominee will simply refuse to give an answer based on some ethical pretext. (Judicial ethics only prohibits actually promising to rule a particular way or expressing firm views about a pending case. As conservative idol Justice Scalia explained, we would not want a judge who was actually devoid of views about the important issues of the day. Yes, I'm agreeing with Scalia on that one!)

So what to do when questioning a smart, politically experienced, well-schooled nominee like Judge Kavanaugh at the confirmation hearings? How to get some actual insight about the kind of Justice he would be? Yes, he can be questioned about his opinions as an appellate judge. But any that might seem wrongheaded or be unpopular could be explained away by Kavanaugh as simply following the Supreme Court's precedents which bind the lower courts, or as applying existing law without regard to his own personal views.

But then there are his personal views about the judicial role. Views that he has expressed about how courts and judges should interpret the law. Particularly the Constitution.

Kavanaugh is being lauded for being an "originalist" and "textualist" in the mold of the late Justice Scalia. That is, the Constitution should be interpreted according to the original or historic meaning of the text. Period. No "living Constitution" to adapt to the changing values of justice and equality of the day. Whether he is actually an "originalist" or or a "textualist" not is another story. So let him speak for himself:

It sure isn't. It's simplistic, contrary to the Constitution itself and, if actually followed, would have profoundly drastic implications for the most basic liberties Americans today enjoy and take for granted.

And that is why neither conservative nor liberal Justices actually adhere to such originalism/textualism, except when it suits them. And more to the point here, at confirmation hearings, the self-proclaimed originalists and textualists--and other species of supposed judicial restraintists--will nevertheless embrace cherished landmark decisions that were utterly non-originalist, non-textualist, and very activist. E.g., Brown v. Bd. of Educ, outlawing racial segregation--which was certainly not what the 14th Amendment was intended to do, nor what its text requires.

Guaranteed, no Supreme Court nominee today will decry that activist, policy-making Brown landmark. And there are plenty of others. In fact, most landmarks are exactly that--activist and policy-making. They change what had been original or what the text itself means.

But before continuing with other landmarks, about which Kavanaugh ought to be asked to reconcile with his originalism/textualism (and they cannot honestly be so reconciled), let's turn to something even more basic. In fact, maybe the most basic. It has to do with the nonsensical complaint, repeated ad nauseam as though religious dogma, that a right should not have been recognized and enforced by the Court because it is not mentioned in the Constitution. Or as Judge Kavanaugh put it in the excerpt above: "Don’t make up new constitutional rights that are not in the text."

Yes, it sounds good. It sounds "uncomplicated," to quote Kavanaugh again. But it is the purest nonsense. And it's a danger to the American scheme of "ordered liberty"--to borrow from Benjamin Cardozo.
[He, of course, was one of the greatest jurists in our history, and he well-understood that such originalism and textualism and not-mentioned-in-the-text (as well as judges-should-not-make-law-or-policy) to be utterly contrary to what judges necessarily do. And to Cardozo, you can add Holmes and Friendly and Posner and countless others of our most venerated and candid jurists who understood and acknowledged the same.]

To allay such fears, a provision was included in the Bill of Rights to foreclose such a "it's-not-in-the-text" argument. That 9th Amendment make clear, in no uncertain terms, that the rights specified elsewhere in these first amendments was necessarily a very limited list, and that unmentioned rights--i.e., those not in the text!!!--were not to be denied.
(9th Amendment: "The enumeration in the Constitution, of certain rights, shall not be construed to deny or disparage others retained by the people.")

This was James Madison's attempt to put a nail in the coffin of the "it's-not-in-the-text" argument. It was his way of saying to Americans at the time and in the future, "don't worry that a right doesn't happen to be mentioned."

That is not to say that every right that might be claimed is entitled to constitutional recognition and protection--i.e., that it is "implicit in the American scheme of ordered liberty." (To again quote Cardozo.) But the mere fact that such a right is not "enumerat[ed]" in the text is irrelevant.

Judge Kavanaugh ought to be questioned about the 9th Amendment. And he ought to be asked whether his "not in the text" argument is exactly what the Founders and Framers feared, and whether he knows that his argument nearly killed the idea of having a Bill of Rights.

Let's consider a few of those "constitutional rights that are not in the text" and which, supposedly, according to Judge Kavanaugh (and other advocates of originalism and textualism), the courts ought not to "make up." What about:


[The entire oft-cited excerpt from Brandeis's renowned and later vindicated and adopted dissent in Olmstead v. United States (1928):
"The makers of our Constitution undertook to secure conditions favorable to the pursuit of happiness. They recognized the significance of man's spiritual nature, of his feelings, and of his intellect. They knew that only a part of the pain, pleasure and satisfactions of life are to be found in material things. They sought to protect Americans in their beliefs, their thoughts, their emotions and their sensations. They conferred, as against the Government, the right to be let alone -- the most comprehensive of rights, and the right most valued by civilized men. To protect that right, every unjustifiable intrusion by the Government upon the privacy of the individual, whatever the means employed, must be deemed a violation of the Fourth Amendment."]


Need I go on? Most of the most basic rights and liberties in living in a free society are NOT in the text of the Constitution. That document is not, and was never intended to be, a catalog of such rights. And again, to make that point clear, the 9th Amendment was included among the original ten, in the hopes of warding off the "it's-not-in-the-text" argument. But that argument keeps rearing its ugly and ignorant head. One must wonder if Judge Kavanaugh, his ilk and his supporters actually believe it.
[For further discussion, see Supremely Awful Arguments: Constitutional Nonsense (Part 2).]

In fact, it's a sure bet they actually don't believe it and don't practice it unless it gets them where they want to go. (More about that in the next post.) But for now, the point is that Judge Kavanaugh's insistence, that judges ought not to "make up" rights that are "not in the text of the Constitution," is actually contrary to the Constitution itself, which explicitly warns against denying rights that are NOT in the text.

Judge Kavanaugh ought to be questioned about all of those "NOT in the text" rights, and others. He ought to be asked which ones the courts and judges--and especially the Supreme Court--should not be recognizing and protecting, simply because they are "not in the text" as he says. And does he really believe that the fundamental principles of liberty that underlie the body of the Constitution and the Bill of Rights do not protect such basic freedoms--just because they are "not in the text?"

In addition to being at odds with the Founders' and Framers' understanding that rights did not need to be enumerated in the Constitution, this not-in-the-text argument is in fact contrary and irreconcilable with most of the essential and cherished rights that courts and judges--including the Supreme Court--have recognized and protected in landmark decisions. They were recognized and protected only because the pseudo-constitutional nonsense of not-in-the-text was disregarded.

It is these rights, protected by courts and judges--and specifically in Supreme Court landmarks--that will be the focus of the next post on Judge Kavanaugh and his avowed originalism and textualism.