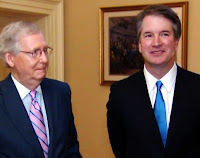 So what about this "originalism" and "settled principles" approach to judicial decision-making that Judge Kavanaugh touts? Sounds fine. We'll see.

In the last post (see Part 1), we scrutinized one branch of the originalist/textualist judicial "philosophy" embraced by Judge Brett Kavanaugh. Specifically, the "not-in-the-text" insistence that judges ought not to "make up" rights that are "not in the text of the Constitution."

That superficially appealing, pseudo-constitutional nonsense--yes that's harsh, but that's really all it is--ignores the fact that most of our most basic liberties don't happen to be in the text. They are nowhere to be found in the Constitution. That document is not, and absolutely was never intended to be, a catalog of rights in American free society--let alone an all-inclusive catalog.

Beyond that, the Founders and Framers actually anticipated that such "not-in-the-text" nonsense would be raised. Madison, Hamilton, and others were originally opposed to any declaration of rights that might possibly be deemed to be a complete list. So when they eventually decided to include such a list, which we now call the Bill of Rights, they included a 9th Amendment which makes explicit that the list is anything but complete.

And yet, Judge Kavanaugh--like others who don't happen to like some of the unlisted rights that have nevertheless been recognized--has somehow repeated that nonsense. It is really difficult to believe that he actually believes it. (Or that his hero, the late Justice Scalia--who opposed gay rights and same-sex marriage and a woman's right to choose and the "incorporation" of the Bill of Rights as due process protections against the states--actually believed it either.) Unless, of course, Judge Kavanaugh means something very different than what he is saying.
(Again, see Part 1 for a very small sampling of the most basic rights we enjoy in American free society which Kavanuagh's "not-in-the-text" nonsense would preclude.)

Now, let's consider that other branch of the originalist/textualist judical "philosophy" that Judge Kavanaugh has embraced. This branch has to do with limiting constitutional rights and liberties to what was specifically intended when the provisions were originally adopted. So no policy-making decisions, and especially not those that diverge from--or enlarge--what was originally intended. But Kavanaugh does seem to be a little flexible on this score. He also speaks about "settled principles" that should bind judges. Apparently, even if those settled principles were not part of the "original intent."

Here is how he put it himself last year, in an address at Notre Dame law school, in honor of Justice Scalia:


Justice Scalia...explained that federal judges are not common-law judges and should not be making policy-laden judgments. Along the same lines, Chief Justice Roberts has famously articulated the vision of the judge as umpire.
I believe very deeply in those visions...By that, I mean a neutral, impartial judiciary that decides cases based on settled principles without regard to policy preferences....
There is often a debate about originalism versus living constitutionalism. Justice Scalia famously promoted originalism. Originalism is akin to textualism, but it takes account of the fact that the meaning of a word might have changed from the time of enactment to today. When that has occurred, the meaning at the time of enactment controls.


So 1) original meaning of the text and 2) settled principles. Does Judge Kavanaugh--like Justice Scalia before him--really believe that? In the abstract? In practice?

To be fair, it should be acknowledged that this original intent and settled principles vision of the judicial role is not preposterous. No, it is not utter nonsense like "not-in-the-text." It is actually one view of judicial restraint that leaves change and policy-making, as much as possible, to the two democratic--i.e., popularly elected--branches of government. It views judicial review--especially when it results in invalidating the actions of those other branches--to be largely anti-democratic, because it not based on popular will.

Accordingly, in a democratic society, such a restrained view of the judicial role calls for considerable deference to the politically elected branches.
(Of course, as even Judge Kavanaugh would presumably agree, judicial review is most essential when it actively protects fundamental rights despite what is popular and, indeed, despite being contrary to what the politically elected branches have done.)

But if this vision of "original intent" and "settled principles" is not utter nonsense, it is at the least very troublesome. The consequences of its application would be drastic. And that is why it is rarely, if ever, adhered to or admitted to by the self-proclaimed devotees when confronted with its implications. That vision is typically raised only to criticize those still-controversial decisions that the devotees happen to dislike.

When confronted with judicial landmarks that we cherish as Americans, insistence upon "original intent" or "settled principles" almost always diminishes or is more palatably redefined. Because these landmark decisions, most of which we now take for granted, were possible only because "original intent" and "settled principles" were disregarded or rejected by the Supreme Court.

Let's consider just a few such landmarks--and the constitutional doctrines they adopted that we now take for granted. Again, none of them would have been possible if  the Court had adhered to "original intent" or "settled principles." What about these:

To be sure, as is typical for Supreme Court nominees, Kavanaugh will almost certainly decline to say whether those cases were wrongly decided or how he would have voted in those cases.
(Although nominees will usually say that Brown v. Bd. of Ed. was correctly decided and that the nominee would have voted that way--because to say otherwise at this point in time would be shameful. But at the same time, self-proclaimed originalists will rarely acknowledge that the Brown decision was entirely contrary to the original intent of the Equal Protection Clause.)
But there are surely ways of questioning Kavanaugh to elicit the same sorts of insights into his thinking. The former trial lawyers among the Senators should be able to do that. Perhaps one approach might be, "How would an originalist Justice have voted in those landmarks?" And "How would a Justice who believed in following settled principles have voted?" Or "How would a judicial philosophy of original intent be applied to those landmarks?" And "How would a judicial philosophy of following settled principles apply?"

In any event, Judge Kavanaugh must be pressed on these issues at the confirmation hearing. That doesn't mean that he will be. Either because the questioning will be uninformed or inept or timid or all of those. Or because any such substantive, probing questions will be blunted by his being unresponsive or by the protective wrangling and obsequiousness of his supporters.

Having faithfully watched many confirmation hearings, I don't expect too much in the way of revealing, forthright, enlightening exchanges between the senators and Judge Kavanaugh. It's more likely that we will hear supporters telling him how wonderful he is and lobbing softball questions to him; opposing senators being frustrated in trying to get direct and candid responses to their questions; and the nominee himself serving up some nice sounding pablum to appeal to his supporting senators and to their voters.

Yes, that's more likely. But let's hope for some surprising substance--every once in a while we get some. Perhaps Judge Kavanaugh will address the cherished landmarks discussed above and others, and acknowledge that they would have been decided differently if the Court had applied "original intent" and "settled principles." In that unlikely event, the Senate and the American people might understand just how drastic the consequences of his vision of judicial decision-making would be.
On the other hand, if Judge Kavanaugh does not respond honestly, then at least those who follow these nomination proceedings closely will know that he avoided giving truthful answers, and we will have learned something disquieting about his integrity.
There's also the possibility--the likelihood in my view--that any answers he gives would be unresponsive, or that he would simply refuse to answer for some ethically-sounding reason. In that case, we can be sure that he'd rather conceal his answers than to acknowledge them publicly.

Unfortunately, as polarized as the Senators and the country are, none of Judge Kavanaugh's answers or non-answers may make any difference. Virtually all the senators are likely to vote along party lines. Nevertheless, the tough questions about his vision of judicial decision-making should be asked. At the least, one way or the other, we would get some sense of the Justice we're getting.