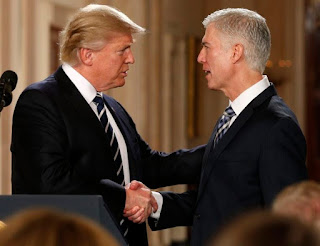 In the previous post, we saw how studies of Neil Gorsuch's judicial record prior to his nomination by President Trump for the Supreme Court showed him to be among the most politically conservative members of the federal judiciary. We also saw how his record immediately following his appointment, the last couple of months of the Supreme Court's 2016-17 term—the spring of 2017—reflected the very same strong politically conservative leanings.

Now what about Gorsuch's voting record for the next two terms on the Court—2017-18 and last term, 2018-19? Specifically, how did his voting record compare to that of the Court's other strongly politically conservative members, Justices Thomas and Samuel Alito, and to the Court as a whole? Let's take a look at the very next term, Gorsuch's first full one on the Court, the 2017-18 term (click to enlarge): 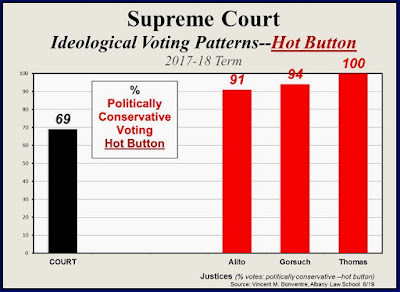 In fact, in some cases, Gorsuch took a position that was even more politically conservative than the already conservative majority or dissenting opinions. For example, in the Masterpiece Cakeshop case, where the bakery refused to create a cake for a same-sex marriage celebration, the majority of the Court ruled for the bakery on very narrow grounds. It held that the Colorado civil rights commission's decision, that the bakery was guilty of sexual orientation discrimination, was tainted by the commission members' explicit hostility to the baker's religion--comparing it to Nazi hatred of the Jews. In short, the Court majority ruled that the baker did not receive a fair hearing. But not that businesses were free to violate state anti-discrimination laws, even for religious reasons.

That decision of the Court was inadequate for Gorsuch. He authored a separate concurring opinion making the claim that the bakery did not actually engage in any discrimination at all—unlawful or otherwise. Gorsuch's rationale? The bakery would not create a same-sex cake for any couple, whether same-sex or opposite-sex. So the bakery was treating everyone the same. Not kidding!

(You know, like the old anti-miscegenation laws did not really discriminate against anyone. Everyone—black or white or Asian—was required to marry within their own race. So those laws treated everyone the same. Gorsuch's argument was reminiscent of that nonsense.)

Let's finish this post by taking a look at the ideological voting spectrum of the entire Court. Here it is (click to enlarge): 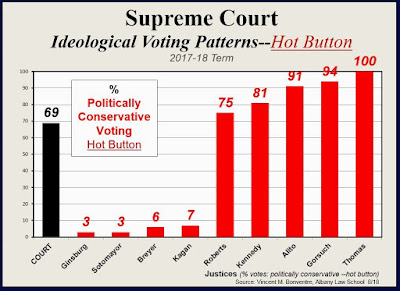 As the graph shows, Gorsuch's voting record was not only the most politically conservative on the Court, other than that of Justice Thomas, but it was also significantly more so than that of Chief Justice Roberts and the decisional record of the Court as a whole.

To be sure, the voting records of the Court's four liberal Justices, were at least as politically liberal as Gorsuch's record was politically conservative. But in nearly one-third of the cases, the Court as a whole joined the liberals, In a full one-quarter of those cases, the Chief Justice did. Gorsuch virtually never did—in fact, it was only one case. [I.e., Sessions v. Dimaya, involving the meaning of "crime of violence" as a basis for deporting immigrants.]

So once again, Justice Gorsuch's voting record on the Court—this time for the 2017-18 term—mirrors the studies based on his pre-appointment record as a federal appellate judge. In the next post, we'll look at Gorsuch's record in the next and most recent term, 2018-19.