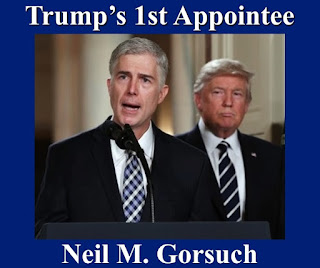 President Trump's first appointee, Neil Gorsuch, took his seat on the Supreme Court in the spring of 2017. By that time, judicial scholars--both political scientists and law professors--had studied his record on the federal appeals court from which he was elevated.

Based on his voting patterns as an appellate judge, Gorsuch's position among the other federal judges on the ideological spectrum had been mapped. Similarly, once he was nominated, his ideological place on the Supreme Court was predicted.

A 2016 study, sponsored by the University of Chicago, compiled and compared voting data on federal judges. A graph based on that data was published in the New York Times the following year when Gorsuch was nominated. It placed his record on the far right, politically conservative side of the federal judiciary. Here's that graph (click to enlarge): 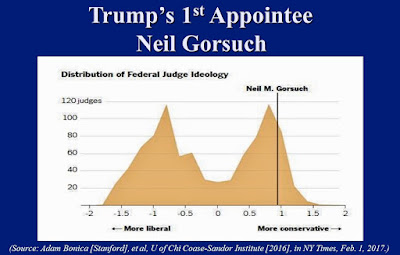 Another study by a team of judicial scholars, led by Lee Epstein and published shortly following Trump's election, inserted Gorsuch among the sitting Justices on the Supreme Court's own ideological spectrum. Gorsuch was placed among the Court's most politically conservative members--between Justices Clarence Thomas and Samuel Alito. Indeed, he was determined to be even more politically conservative than the Justice he replaced, Antonin Scalia. Here's that graph (click to enlarge):
In yet another study, this one completed the following year, Gorsuch's appellate record again placed him among the Court's most politically conservative Justices. In fact, this study estimated that his policy preferences would position him at the far end of the Court's right wing. Here are those graphed findings (click to enlarge):

It was thus widely expected, among those who closely study such things, that Gorsuch would be a very politically conservative Justice. Not a judicial restraintist. Not a stickler for stare decisis. Not one who defers to the other branches or to the states. Not a strict constructionist. Not a faithful adherent of previously settled constitutional principles. Not a philosophical conservative in a classic libertarian sense. But a conservative in the common contemporary political sense.

In short, how would conservative Republican politicians be expected to vote on the controversial issues of the day? And how closely would Justice Neil Gorsuch's voting align with conservative politicians on those issues?

Right from the start, in his first few months on the Court--from the time of his appointment in April of 2017 to the end of the 2016-17 term that spring--Gorsuch did cast votes on many such issues. The death penalty, campaign finance restrictions, gun rights, gay rights, workers' rights, church and state, President Trump's travel ban, and other politically charged issues among them.

What kind of record did he compile at the very start of his Supreme Court career? How did his record compare to that of other conservatives on the Court in that spring of 2017? Well, take a look (click to enlarge): 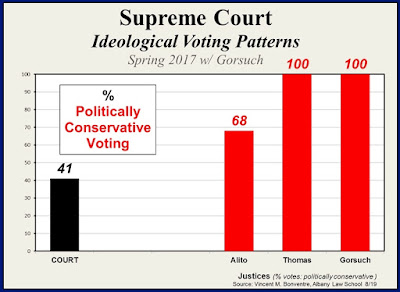 Justice Gorsuch's voting record, in his very first weeks on the Court, was at least as politically conservative as the judicial studies had predicted. From his appointment in April 2017, thru the end of the Court's term in the closing days of June, he compiled a voting record which, together with that of Justice Thomas, was the most conservative of the Justices.

In the next post, we'll take a closer look at some of this, including how Justice Gorsuch's voting record compared to that of all of his colleagues--not just the most conservative ones. And we'll look at his voting record in the following two full terms that he's been on the Court, 2017-18 and the term that just finished, 2018-19.