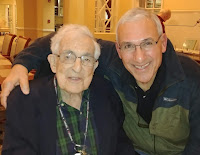 Henry J. Abraham, University of Virginia Professor Emeritus, passed away last week at the age of 98.
My Ph.D. mentor--and adopted "Uncle Henry"--was unconditionally cherished by so many of us over his more than 50 years of teaching. All of us in the "Tribe of Abraham" are heartbroken.
I'm so glad I spent time with him last month. 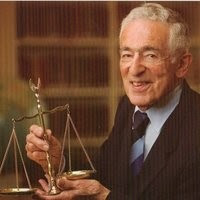 Professor Henry J. Abraham passed away February 26, 2020 at the age of 98 in Charlottesville, VA. He was born August 25, 1921, in Offenbach am Main, Germany, the older son of Frederick and Liesel Kullman Abraham. He attended elementary schools there and the initial stages of high school at the Realgymnasium (Philantropin) in Frankfurt am Main. When he was 15, his farsighted mother, over the strong opposition of his father, determined that there was no safe future for him in Nazi Germany. She decided to send him to the United States. Wanting him to have a trade prior to his departure, she arranged for an apprenticeship as a printer which he completed while attending school.

He left for the U.S alone in April 1937 and journeyed to Pittsburgh, PA where his mother’s sister was a governess/housekeeper for two orphaned young women. But he could not stay with her. He attended and finished high school in Pittsburgh. In 1939 he was joined by his parents and beloved brother, Otto who predeceased him. Because his father’s health was broken as a result of his incarceration in the concentration camps of Sachenhausen and Dachau, following Kristallnacht in November of 1938, Henry was unable to go to college and commenced work as a stock clerk for May Stern & Co., followed by a stint as a bookkeeper for a scrap iron firm.

In 1942 he was drafted in the United States Army and became a U.S. citizen in 1943. After basic training in Fort Eustis, VA., he entered the army specialized training program and was sent to Kenyon College for language training. Following the end of the program, he was assigned to the Signal Corps and ultimately to the G-2 training base at Camp Ritchie, MD. From there he was sent overseas and saw American army service in England, Belgium, Holland, France and Germany, initially as an interrogator of enemy prisoners of war and ultimately as a member of the 6889th Berlin Documents Center, which was charged with the location, analysis, distribution, and interpretation of principally German documents. The center had a direct line to the U.S. Supreme Court Justice Jackson’s office at the Nuremberg War Crimes Trials in 1945-46. Henry was discharged in the spring of 1946 and was determined to enter college under the G.I. Bill.

He matriculated Kenyon in 1946, and having completed two summer schools at Columbia College, received his undergraduate degree from his beloved Kenyon first in his class, summa cum laude, Phi Beta Kappa, with Highest Honors in Political Science in 1948. He received his M.A. degree in Public Law and Government from Columbia University in 1949 and his Ph.D. from the University of Pennsylvania in 1952, where he had joined the faculty as Instructor in Political Science in 1949 at the annual salary of $2,400. Rising through the ranks, he became a full professor in 1962, having received Penn’s first social science undergraduate teaching award in 1959, prior to spending a year in Aarhus and Copenhagen, Denmark, with his family on a Fulbright scholarship. In 1954 he married fellow Penn student Mildred Kosches of Woodmere, N.Y. with sons Philip and Peter arriving in 1957 and 1962.

In 1972 Henry and his family left Penn and Philadelphia for Charlottesville, VA, where he became a chaired professor at the University of Virginia in Government and Foreign Affairs retiring in 1997, but he continued to teach in a program for 55 plus year old adults in courses on his specialty, the U.S. Supreme Court. Other than his family, teaching was the love of his life. The dedication he evinced vis-à-vis his circa 25,000-30,000 students over more than six decades, resulted in an abiding relationship, among which a group of 25 with whom he was close to the end, called itself “The Tribe of Abraham.”

Henry was a prolific author in his field, concentrating on books about the nature of the judicial process, in general, and the U.S. Supreme Court, in particular. He wrote 13 books, all of which were in multiple editions, ranging from two to ten. He also penned some 125 chapters in books and professional articles. He received honorary degrees from Kenyon College, the University of Hartford, Knox College, St. Joseph’s University and Old Dominion University. During a 30-year period from the 1960’s to the 1990’s, the agencies of the U.S. Department of State utilized his services as a lecturer throughout the world in 65 lands, including: The United Kingdom, the Netherlands, France, Germany, Italy, Denmark, Norway, Sweden, Finland, Iceland, Canada, Peru,  Bolivia, Brazil, Argentina, Paraguay, India, Iran, Japan, China, Singapore, Taiwan, the Philippines, Korea, New Zealand and Australia. In the U.S. he was a visiting professor at Swarthmore College, Columbia University, the University of Colorado, the University of Louisiana at Shreveport, the University of Richmond, the City University of New York, and he lectured throughout the states.

Professor Abraham is survived by his wife of 66 years, Mildred; their sons Philip (Janet) and Peter (Anne), grandchildren Benjamin, Lauren, Marnie and Liesel. Interment at Monticello Memorial Gardens was private. A date for a memorial service will be announced later. In lieu of flowers, it was Henry’s wish that any contributions be made to one of the following: Book Baskets at bookbaskets.org; the Antidefamation League at  adl.org; The United States Holocaust Memorial Museum at ushmm.org; The American Society of Yad Vashem at yadvashemusa.org or Kenyon College at Kenyon.edu/give-to-kenyon/