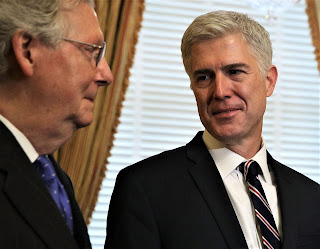 In the first post in this series, we took a look at Justice Niel Gorsuch's voting record immediately following his appointment in the final few months of the 2016-17 term. As shown in that post, Gorsuch voted for the politically conservative side of every politically charged issue in cases involving the death penalty (pro), campaign finance restrictions (con), gun rights (pro), gay rights (con), workers' rights (con), separation of church and state (con), President Trump's travel ban (pro), and similar politically divisive matters.

Juxtaposing his record with that of the other conservatives on the Court, as well as of the Court as a whole, in that spring of 2017 looks like this (click to enlarge).

And again, let's juxtapose Gorsuch's voting with that of the other conservatives on the Court, as well as of the Court as a whole. His record for the first full term on the Court, the 2017-18 term, looks like this (click to enlarge).


Now, let's take a look at Gorsuch's record for the last completed term, 2018-19, his second full year on the Court. Among the cases involving those "hot-button" or politically charged issues, these were his positions:
Well, speaking of patterns, Gorsuch's voting pattern should be quite evident. Whether it's church and state, abortion rights, the death penalty, race-related questions, the Trump administration's initiatives, and other politically charged issues, Gorsuch voted like a conservative Republican partisan. And he did so even more than some other conservatives on the Court. 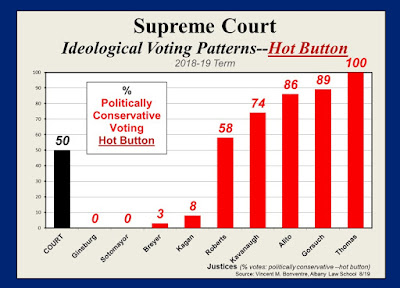 The difference between the two Trump appointees, 89% politically conservative for Gorsuch, 74% for Kavanaugh, is underscored by the sorts of politically charged issues on which they disagreed. Take a look at some of them (click to enlarge): 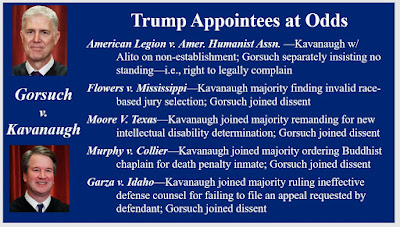 Church and state, racial discrimination, the death penalty, an accused's right to effective counsel--these are among the critical areas of constitutional law in which Gorsuch took the more politically conservative side of the issue than did Kavanaugh.

To be sure, there are many many other areas of constitutional law, as well as non-constitutional but still highly charged political issues, about which we do not yet have Supreme Court decisions in which both Gorsuch and Kavanaugh participated. There are some of those in cases to be handed down by the Court within the next few weeks. That will give us more evidence of the individual and the comparative ideological leanings of the two Trump appointees. Stay tuned!