The Incredible Shrinking Docket: The Court of Appeals' Reduced Caseload (The Graph)

In The Incredible Shrinking Docket: The Court of Appeals' Reduced Caseload, we looked at the total appeals decided by New York's highest court each year from 1988 through 2021, the last full year for which figures are available. The data are all derived from the Court's own Annual Reports.
The visualization of the reduction in caseload over the years makes clear just how dramatic it has been, especially recently. Here it is:
(click to enlarge for a better view) 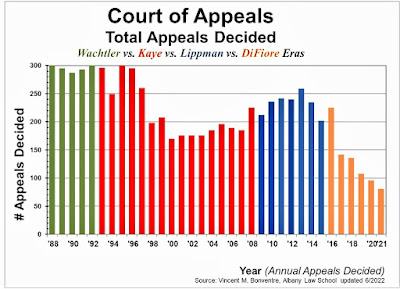 As discussed previously and now depicted in the graph above, the total of appeals decided annually by the Court has, indeed, fallen dramatically from what it had been. During the last several years of Sol Wachtler's tenure as Chief Judge through the early years of Judith Kaye's, New York's highest court typically decided almost 300 appeals annually. There was a significant drop in the later years of Kaye's tenure and then an increase while Jonathan Lippman was Chief Judge. Most recently, during Chief Judge Janet DiFiore's tenure, the total appeals decided annually dropped significantly to levels not previously seen.
Again, it may well be argued whether this development is a good thing or a bad one. But there can be no argument that the Court today is deciding fewer cases--much, much fewer.
Next post on the Court's caseload, we'll look at criminal appeals, including which Judges are granting and which Judges aren't.