The Incredible Shrinking Docket: The Court of Appeals' CRIMINAL Caseload (with graphs!)

We've previously looked at the reduction in the caseload at New York's highest court. (See The Incredible Shrinking Docket: The Court of Appeals' Reduced Caseload [The Graph].) Now we'll focus specifically on criminal appeals.
The magnificent Court of Appeals courtroom.
This has been a source of considerable consternation for the state's criminal defense bar. The lack of criminal defense experience among the judges, the decidedly pro-prosecution direction of the Court's decisions, and the sharp decrease in criminal appeals being accepted for review and decided--these have all been the subject of much disappointment and criticism.
The recent complaint of one prominent defense attorney is typical: “The Court of Appeals under [Gov. Andrew] Cuomo’s appointments has been moving further and further to the right, which is troubling given that the voting patterns of the state of New York demonstrate that the people of New York don’t view the world that way,”
[Alice Fontier, immediate past president of the New York State Association of Criminal Defense Lawyers, as quoted in Progressives Mobilize to Block Cuomo’s Tough-on-Crime Pick For Highest NY Court, by Sam Mellins, New York Focus, June 4, 2021.]
And another: "The court had done more work in the past. So what’s going on and what’s driving that change?" said Susan Bryant, executive director of the New York State Defenders Association. "I think anytime you see a significant shift in a court hearing cases, it’s concerning."
[See Drop in criminal caseload puts spotlight on how top court chooses its cases, by Yancey Roy, Newsday, July 18, 2021.]
It's not just criminal defense lawyers who have perceived a problem. Indeed, two recently retired Court of Appeals Judges, Eugene Pigott and Robert Smith, have both expressed concern about the process in which criminal cases are granted an appeal. The random assignment of CLA's [Criminal Leave Applications] to a single Judge, who is then the sole decider of whether a criminal appeal is heard by the Court, inevitably introduces a considerable degree of arbitrariness into the system.
Some Judges are much more generous in granting CLA's. Others are much less so. Hence, the odds of an appeal being accepted is necessarily affected by which Judge happens to get the CLA. Moreover, the wisdom and consistency of the process, as well as its fairness, would undoubtedly be enhanced if more than one Judge--let alone the entire Court, as in civil cases--reviewed the applications seeking an appeal.
Many share the view of Judge Pigott who has been quite pointed: "There’s no doubt this has to change. It’s absurd." [As quoted by Yancey Roy, cited above.]
[Disclosure: I do share the concerns of the criminal defense lawyers and I emphatically agree with Judge Pigott.]
But regardless of one's view of the Court's current treatment of criminal cases generally or of the CLA process in particular, there are the facts. Let's get to them.
First, let's take a look at the Court's criminal caseload. Specifically, let's look at the number of criminal appeals decided annually over the years. Previously, when we looked at the total number of appeals decided--civil and criminal--we began with the Court during the tenure of Chief Judge Sol Wachtler and continued through the Court under Judith Kaye, Jonathan Lippman, and currently under Janet DiFiore. We'll do the same with criminal appeals.
Here's the data, from the Court's own Annual Reports, on the number of criminal appeals it decided each year beginning with 1988, while Wachtler was Chief Judge, through 2021, the last period for which data is available. I've already graphed it all for ease of comparison visualization (and because I myself enjoy these):
(click to enlarge for a better view) 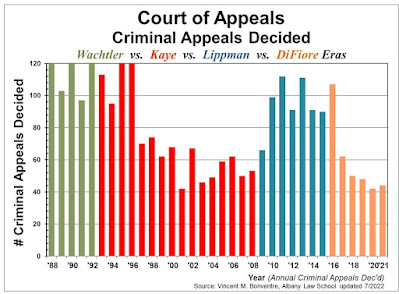 As is clear from the graph, the number of criminal appeals decided by New York's highest court has declined dramatically in recent years--drastically if you ask the criminal defense bar. It mirrors the decrease in the total criminal plus civil caseload that we've previously seen.
The criminal caseload remained roughly the same from the latter years of Wachtler's tenure as Chief Judge through the early years under Kaye. It then dropped significantly during the remaining years of Kaye's tenure, rose again significantly while Lippman was Chief Judge, only to drop once more the last several years under DiFiore. In fact, the current criminal caseload at the Court is the lowest it has ever been throughout this entire period--the only equivalent being the very lowest it was during a time of plummeting caseloads under Kaye.
To say the same thing with figures: the Court decided at least 90 criminal appeals annually, and usually more than 100, under Wachtler and through the first several years of Kay's tenure. Thereafter--and following then-Governor Pataki's relentless bashing of the Court for supposedly coddling criminals and disfavoring victims--the Court under Kaye sharply cut its criminal caseload. With some fluctuation, the annual number was roughly half of what it had been--from over 100 to less than 50 in some years.
When Lippman became Chief Judge, he made clear his intent to increase access to the Court and, perhaps most emphatically, to increase the number of criminal appeals the Court would hear.
(See Joel Stashenko, "Chief Judge to Review Why Court Accepts Few Criminal Appeals," NYLJ, April 22, 2009; also NY Court of Appeals: Granting Criminal Appeals--Up, Down, Now Up Again? [Part 1: Overview].)
Consequently, the Court's criminal caseload under Lippman increased as sharply as it had just previously dropped. Throughout his tenure, the Court would hear at least 90 criminal appeals annually, and in some years more than 100.
During the first year of DiFiore's tenure as Chief Judge, when the Court was hearing criminal cases largely accepted for review the year before under Lippman, the criminal caseload exceeded 100. Ever since, however, there has been a steep decline. In recent years, the Court has decided 40+ criminal appeals, which is half of what the Court's criminal caseload was under Lippman. Indeed, it is less than half of what it was under Wachtler or during the first several years under Kaye. It is even less than it was after the caseload plummeted under Kaye.
Let's conclude with another graph that may help to simplify all these figures. Here are the 5-year averages of the Court's annual criminal caseloads, again from Wachtler to DiFiore:
(click to enlarge for a better view) 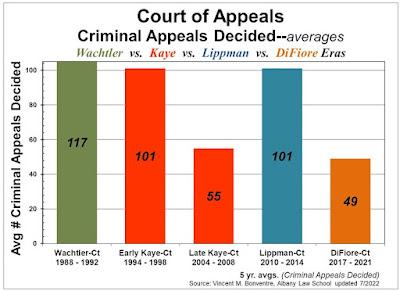 As this graph makes crystal clear, across much of the last several decades, the Court of Appeals decided 100 or more criminal cases a year. The Court decided far fewer in two separate periods: the latter part of the Kaye era and the last several years under Chief Judge DiFiore.
Whatever the particular causes or rationale, the Court's caseload in both of these periods dropped to approximately half of what it had been in the immediately preceding years. Such dramatic changes would seem strongly to evince deliberate policy choices. One of the Court's recent retirees, interviewed about the recent drop in the criminal caseload, was reported to have explained that "the chief judge’s approach set a tone. 'I do think it made a difference who the chief was,' [former Judge Robert] Smith said. 'Leadership has an effect.'" [From Yancey Roy, cited above.]
[It should be noted that the Court's total caseloads--civil plus criminal--were much greater prior to the periods discussed and depicted in the two graphs, as well as in the two previous posts. For example, throughout the early 1980's, the Court's total caseload was more than double what it would be in the latter years of the Wachtler era. The Court would regularly decide more than 700 appeals annually. That total caseload dropped significantly in the later 1980's after the Court's jurisdiction was legislatively changed, effective in 1986, to give it much greater control over its docket.]
We'll next look at the number of CLA's [Criminal Leave Applications] granted by the Court annually over the years and, recently, how many CLA's the individual members of the Court have been granting.