The other graph is simply a rearranging of the Law & Order graph posted a few days ago so that, like all the other graphs, the listing of the justices from left to right conforms to most liberal to most conservative voting records. Here's that one first. (As always, click to enlarge.)
GRAPH 1: Law & Order Decisions 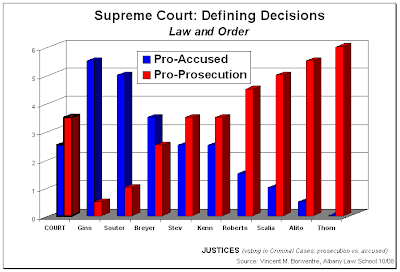 Now like I said, we've seen that one before. Just ordered in reverse. But just take another look. From left to right. From Ginsburg and Souter to Thomas and Alito. How many paragraphs or pages is that worth? Well that's the spectrum in criminal cases. (And what about blue for the libs and red for the conservatives? I hope someone enjoys this as much as I do. It does seem particularly fitting at this time with all the maps of blue states and red states that fill the election news on CNN & MSNBC & FOX--yeah, I'm a junkie for that stuff too.)
Now for the graph that puts it all together. Well, all except the "political process" decisions which will be the subject of the next post in this series. So this graph is an update of the last "GRAPH-ic Recap" (September 24, 2008). It adds the newly discussed criminal cases--the "Law & Order" category of defining decisions--to that previous recap. Here it is:
GRAPH 2: Discrimination + Cultural Issues + Law & Order Decisions
(click to enlarge) 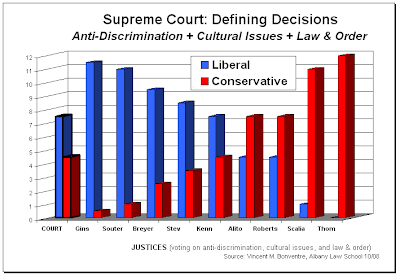 Again, how many paragraphs or pages is that worth? Notice the spectrum here. Still Ginsburg and Souter on the left end. But on the right it's now Thomas and Scalia. Not Alito. Although his record in the defining criminal cases put him to the far right because his voting is among the most pro-prosecution within the Court, his overall voting record is less conservative. This is largely because of his record in the discrimination cases which, as we have previously seen, placed him with the Court's liberals. So when all these defining decisions are taken together, Thomas and Scalia--as Court watchers would expect--are at the far right end of the Court's spectrum. Alito, like Roberts, has a conservative voting record. But it is not as ideologically lopsided, absolute, rigid, consistent, reliable, faithful--or whatever characterization one might prefer, depending on whatever sort of ideological judging one might prefer.

Anyhow, more on the voting records and the Court's spectrum in the next post in this series. It will take a look at selected "defining" cases in which aspects of the political process were challenged. And, of course, the cases are ideologically charged.