Supreme Court: Justices In The Majority (Part 2--And Compared to In Dissent)

GRAPH 1: Frequency in Majority (#)
(In Order of Frequency)
(click to enlarge) 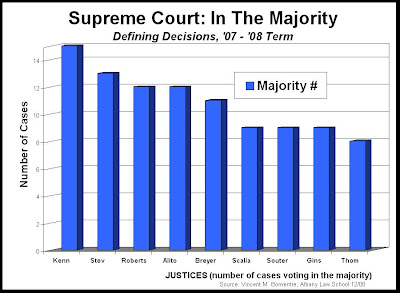 Here's a reorganization of the data from GRAPH 1 of the first post in this series. The Justices are positioned from left to right in the descending order of their frequency in the majority, and the frequencies are in absolute numbers (out of the 15 "defining decisions") instead of percentages. Simple enough reorganization, but an even starker picture of what we're talking about. E.g., Justice Kennedy first on the graph, having been in the majority in all 15 cases; Justice Thomas last, in only 8 of the 15, the least among his colleagues. (This post will deal with different matters within the data than did the previous post which, of course, is still available for anyone who missed it or who would like a refresher: see Supreme Court: Justices In The Majority, Dec. 8, 2008.)
The graph below is yet another reorganization. This one highlights how frequently each Justice was out of the majority--i.e., in dissent, having written or joined a dissenting opinion. Also, the frequencies are in percentages of the defining decisions. This reorganized graph will hopefully help to underscore the extent to which each Justice breaks with the Court's/majority's decisions--or did so in the defining decisions in the '07-'08 term--and the nature of those departures. The latter is, in fact, the focus of the discussion following the graph.

GRAPH 2: Frequency in Dissent/Majority (%)
(In Order of Dissent Frequency)
(click to enlarge) 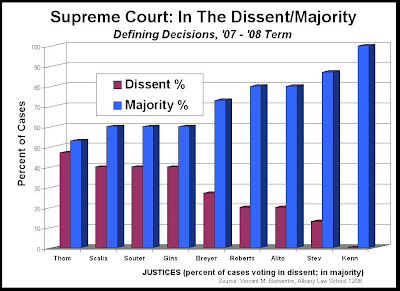 The contrasting amounts of the two colors for each of the Justices sums it up pretty vividly. Just contrast the relative amounts of red [maroon? burgundy? garnet?] representing dissents and blue [yep, blue] representing majorities for Thomas, the first Justice on the graph; then the same for Kennedy at the other end; then contrast the two. Now that's a heck of a picture for a heck of a contrast. It reflects the difference within the Court between Thomas at one ideological end of the Court (the right/conservative end) and Kennedy in the center and as the swing vote.

Look also at the contrasting amounts of garnet [I've now settled on that, since it's the color of my undergraduate alma mater, Union College in Schenectady.] for Scalia, Souter and Ginsburg on the one hand, and Roberts, Alito and Stevens on the other. The former group of three was more out of synch with the Court as a whole in the defining cases, and the latter group of three more in synch.
In the next post, we'll take a look at each Justice's particular departure's from the Court majority.