Supreme Court: Justices In The Majority (Part 3--In Dissent Over What?)

In this post, we'll take a quick look at each Justice individually. Specifically, we'll see the cases in which each Justice broke with the Court and dissented from its decision. What kinds of decisions did each Justice disagree with strongly enough to take a public stand against a majority of his/her colleagues? Now the answer to that question tells us a good deal. In other words, what's so important that it's worth dissenting? And what are the types of issues? Let's get going.

First, here's a graph that rehashes--in a way more immediately relevant to this post--the data and graphs in the previous posts in this series on the New York Court Watcher. (See Supreme Court: Justices In The Majority (Part 2--And Compared to In Dissent), Dec. 17, 2008; Supreme Court: Justices In The Majority, Dec. 8, 2008.) This graph simply depicts how often each Justice dissented--wrote or joined a dissenting opinion--in the "defining" cases.
GRAPH 1: Frequency in Dissent (#)
(click to enlarge) 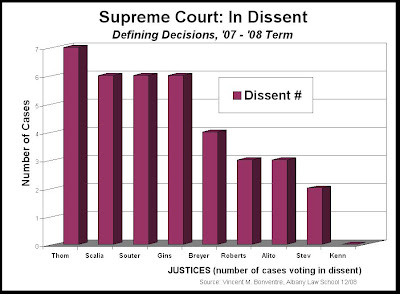 The graph has the Justices in the order of their frequency in dissent--yes, that's obvious. The purpose--undoubtedly just as obvious--is to underscore the contrast from one end of the dissent (or out-of-the-majority) spectrum to the other. Look's pretty stark. For the discussion of each Justice, however, let's proceed in order of seniority. [For no particular reason other than that I'm a wee bit obsessive-compulsive. Actually more than a wee bit. God help my poor wife and kids who put up with me.]

William Kennedy: Part of the majority in every case (0% dissent). Now that's being the Court's center and swing.
David Souter: He departed from the Court's majority in 6 of the 15 decisions (40%).
He took more politically liberal positions in the "cultural issues" and "political process" cases. Regarding "cultural issues," in Heller (gun right is individual), Baze (upholding lethal injection), and Medellin (states not bound by Int'l. Ct. of Justice ruling, even w/ the President's endorsement), he voted in dissent, respectively, that the gun right was intended for state governments, that the current method of lethal injection has too high a risk of unnecessary pain, and that international law is binding under the Constitution. Analogously, in Williams (upholding child pornography criminal law), he dissented against the conservative cultural position and found 1st Amendment problems.
In the "political process" cases, he dissented from the Court's holdings in Crawford (upholding voter ID law) and Davis (invalidating campaign finance restrictions). He took the position that the ID law was an undue burden on voting rights and that campaign finance laws did not violate free speech.

Clarence Thomas: He took a different position than the Court majority in 7 of the 15 cases (47%).
Like Scalia, he dissented in all 4 discrimination cases, finding no legitimate discrimination claim in any of them. (See Scalia, above.) In the "cultural issues" cases, he, like Roberts and Scalia, voted to allow harsher treatment of Gitmo detainees (Boumediene) and child rapists (Kennedy). (See Roberts, above.)
Analogously, in Kimbrough (upholding a sentence more lenient than the guidelines for crack cocaine), he dissented to insist on the harsher punishment provided by the guidelines.

Ruth Bader Ginsburg: She broke with the Court majority in 6 of the 15 cases (40%).
Like Souter on the "cultural issues" (see Souter, above), she dissented in Heller (gun right), Baze (lethal injection) and Medellin (international court decision), as well as Williams (child pornography), taking the more liberal position. Same for the "political process" cases, Crawford (voter ID law) and Davis (campaign finance). (See Souter, above.)

Stephen Breyer: He was on the opposite side of the Court majority in 4 of the 15 cases (27%).
Like Souter and Ginsburg, he took the more liberal position in dissent in the "cultural issues" cases, Heller (gun right) and Medellin (international court decision)--but not in Baze (lethal injection) or Williams (child pornography). (See Souter, above.)
In the "political process" cases, he was again on the same side as Souter and Ginsburg, dissenting from the Court's holdings in Crawford (voter ID law) and Davis (campaign finance restrictions). (See Souter, above.)

Samuel Alito: He broke with the Court majority in 3 of the 15 cases (20%).
Like Roberts, Scalia and Thomas in 2 "cultural issues" cases, he opposed the majority's more lenient/protective treatment of Gitmo detainees (Boumediene) and child rapists (Kennedy). (See Roberts, above.) Likewise, he was on the same side as Thomas in Kimbrough (sentence for crack cocaine), dissenting to insist on the harsher punishment provided by the sentencing guidelines.

Now for each Justice, you know what to do: connect the dots! Once each Justice's dissents are laid out as we've just done, the common denominators and, thus, the patterns become pretty evident. As do the contrasts between the Justices.

For the next post, probably the last in this series, we'll look at those cases in which each Justice seemed to break--not with the Court majority--but with his/her typical political or ideological pattern. I.e., on what issues did a liberal Justice vote for the more conservative resolution, and vice-versa ? Or otherwise break from some voting pattern?