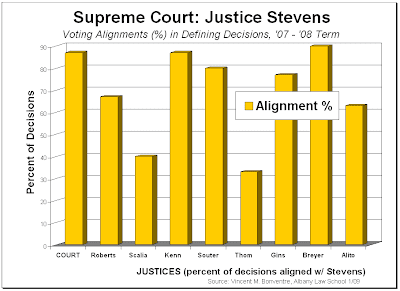 Ok, right at the start, a nice graph that depicts a lot of what is to follow in prose. So if you're satisfied, no need to read further. But if you decide to continue, you just might find a few interesting tidbits--some of which may not be immediately obvious and some of which are not there at all. So for those of you who want to move on, here goes.

The focus of this post (which should be somewhat apparent by now) is John Paul Stevens, the Justice who's been on the Court the longest and, therefore, is second only to the Chief Justice in the Court's hierarchy. He's the one who swore in the Vice President this past Tuesday and got the oath right. (John Roberts, the Chief Justice, who flubbed the oath when swearing in President Obama [yep, PRESIDENT OBAMA!], was the focus of the first post in this series. See Supreme Court: Voting W/ Whom? & Breaking Ranks When?--Focus on Roberts [Yes, Graphs Included], Jan. 10, 2009.)

Stevens, appointed 33 years ago by Republican President Gerald Ford, almost immediately proved himself more aligned with the Court's liberals than its conservatives. That alignment has continued. Indeed, Stevens is undoubtedly today's veteran leader of the Court's liberal wing--even if not it's most liberal member. (For related discussions, see GRAPH-ic Total Recap - Supreme Court's 2007-08 Term: The Defining Decisions (Discrimination+Cultural Issues+Law & Order+Political Process), Nov. 26, 2008, and the several preceding posts in that series which are cited therein.)

As was done in the post that focused on Roberts, this one will look at the voting alignments and the "breaking ranks" cases for Stevens. So we'll look at the frequency with which Stevens voted with each of his colleagues--i.e., voted on the same side of an issue--in the "defining decisions" of the Court's last term. (Those 15 particularly revealing decisions were identified and discussed in the Nov. 16, 2008 post cited above and in the previous ones cited in that post.) And in addition to the alignment frequencies, we'll look at the cases in which Stevens broke ranks with his typical ideological allies (the liberals or the more liberal side of an issue) and voted instead with his usual ideological opposites (the conservatives or the more conservative side of an issue).

To get started, let's take a second look at the info depicted in the first graph, this time rearranged with Stevens' voting alignments in order from the highest on down. (Yes, again, "descending" order.)
GRAPH 2: Justice Stevens
Voting Alignments (%) in Descending Order
(click to enlarge) 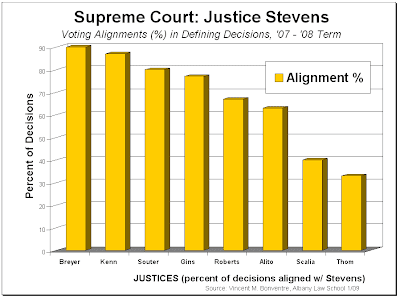 As we previously saw with Roberts, what is immediately clear for Stevens is the wide range of alignment frequencies with his colleagues. From a high of 90% alignment with Stephen Breyer to a low of 33% with Clarence Thomas. What is also clear is Stevens' high rate of alignment with several of his colleagues. In addition to Breyer at 90%, there's Anthony Kennedy at 87%, David Souter at 80%, and Ruth Bader Ginsburg at 77%. This is consistent with the high rate at which he was in the majority in these "defining decisions." As shown in Graph #1, that was 87%.

At the other end of the alignment spectrum for Stevens--the far other end--is Thomas, at a mere 33%, as we've already noted. There's Scalia as well, at 40%. With his remaining colleagues, Roberts and Samuel Alito, Stevens' alignments was neither especially high nor low: 67% and 63% respectively.

So recapped somewhat differently, liberal Justice Stevens was aligned most highly with liberal Breyer and moderate-swing vote Kennedy, and almost as highly with the Court's staunchest liberals, Souter and Ginsburg. (See the November 26, 2008 post [link above], and the posts cited in that one, for discussions of where each Justice falls on the Court's ideological voting spectrum.) Stevens was aligned the very least with the Court's staunchest conservatives, Thomas and Scalia. He was aligned moderately with Roberts and Alito, whose records are not nearly as staunchly conservative as Thomas and Scalia.

Now let's take a look at these same voting alignments, but this time stated in actual numbers of cases (out of the total 15 "defining decisions") instead of percentages. And let's also look at the flipside: the non-alignment data. So the number of cases in agreement, and number of cases in disagreement. Graph 3 depicts Stevens' voting alignments and non-alignments in order of Justice seniority. 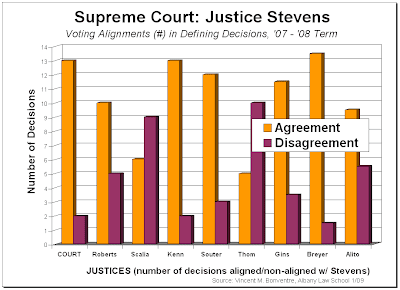 Now, if the Justices are simply rearranged in the order of their alignment or agreement with Stevens, it looks like this: 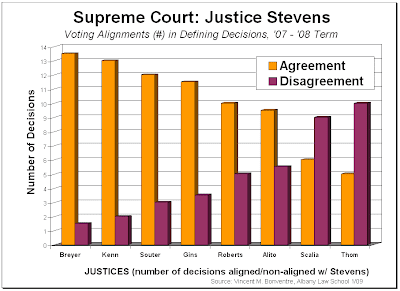 Among the things these last 2 graphs make even more vivd is the extent of disagreement Stevens had with some of his colleagues--as well as the minimal disagreement he had with others. His disagreement with Thomas, for example, was 10 times that with Breyer, and 5 times that with Kennedy. With Scalia, the multiples of disagreement were almost as great. (Yes, you say, but what gives with the 1/2 numbers depicted in the graph? Let me repeat what I wrote in the post on Roberts. See the bracketed italics below.)

[As explained in earlier posts (see, Supreme Court's 2007-08 Term: The Defining Decisions (Part 3: Law & Order [nifty graph included!]), Oct. 4, 2008), the votes in each case are generally counted as either on one side of the issue decided by the Court or the other. In some cases, however, some votes seem more accurately treated as half and half. So, e.g., in Baze, on the constitutional validity of execution by lethal injection, the plurality opinion by Roberts was midway between the dissent of Ginsburg (joined by Souter), which argued that there were fatal constitutional problems, and the separate concurring opinion of Thomas (joined by Scalia), which saw no possible problem with lethal injection. So Roberts' vote, as well as the votes of those who joined his result and his reasoning (even if in a separate concurring opinion as did Stevens), is treated as in half agreement with the dissenters and half agreement with the separate concurrers. Similarly, in Moore, on the constitutional validity of a search conducted in violation of state law, although Ginsburg voted with the rest of the Court to uphold the conviction in question, her separate concurring opinion made clear that she took a significantly less pro-prosecution position than her colleagues. So her vote is treated as half with and half against the majority--which included both Roberts and Stevens. ]

As for Stevens' "breaking ranks" cases, he voted with the conservatives and against his usual liberal allies in 4 out of the 15 "defining decisions." (He also voted with the conservatives in 2 additional cases. But in those 2, the other liberal Justices--or all except one--voted the same way. So in Lopez Torres, in which the Court upheld New York State's elective system for trial judges, the Court unanimously reversed the more liberal decision of the 2d Circuit Court of Appeals which had found that the system violated First Amendment rights. And in Moore, the Court was virtually unanimous in ruling that its own interpretation of the Fourth Amendment--not the greater protections of a state's own law--determined whether a violation occured. Ginsburg registered some disagreement in a separate concurring opinion, but only with some of the Court's reasoning.)

The 4 cases in which Stevens actually did break ranks with his fellow liberals were Baze (lethal injection), Medellin (authority of the international court's rulings), Williams (child pornography), and Crawford (voter identification).

In Baze and Crawford he was willing to uphold state choices which were legitimate on their face--lethal injection as a humane method of execution and identification requirements to prevent voter fraud. But he was only willing unless and until the complaints against them were shown to be actual, rather than just potential. So, in both cases, he rejected the more liberal positions taken by his usual allies--i.e., that lethal injection and voter identification requirements were invalid period, because the very real possibile problems of each could not be disregarded. But neither did Stevens side with the staunch conservatives in those cases. They argued (in a separate concurring opinion in each case) that there were simply no possible constitutional infirmities with lethal injection or with voter identification requirements. The positions Stevens took, in both Baze and Crawford, were midway between the more conservative and more liberal positions taken.

In Medellin, Stevens again took a position to afford more latitude to a state. He agreed with the conservatives that neither the International Court of Justice nor the President has the authority to require a state to abide by an international treaty. That is, at least not until or unless Congress passes a law requiring state abidance. Stevens disagreed with his fellow liberals, Breyer, Souter and Ginsburg, that international treaties were automatically binding law under the Supremacy Clause of the Constitution.

Finally, in Williams, where he was joined in his concurring opinion by fellow liberal Breyer, Stevens was willing to give Congress the benefit of the doubt--just as he was willing to do with the states in Baze, Crawford, and Medellin. He did so here by presuming that Congress did not intend an unconstitutional law. Accordingly, he interpreted the child pornography statute in question so that it would not infringe upon First Amendment rights and, therefore, would be valid. His position contrasted with the more liberal position of Souter (who was joined in dissent by Ginsburg). Souter's argument was that the law unavoidably targeted protected speech.

The benefit of the doubt and deference. That seems to have separated Stevens from his fellow liberals in his "breaking ranks" cases. Now he didn't turn a blind eye to the constitutional problems raised in those 4 cases. In both Baze and Crawford he acknowledged the possible problems. But he chose not to interfere with the states until the problems became real. In Williams, he acknowledged the constitutional problems. So he interpreted the statute to eliminate them. In Medellin, he acknowledged the place of international law as part of this country's law. But he took the position that Congress was the appropriate branch of government to implement it. So unlike the most conservative Justices, he did see problems. But he took a more wait-and-see approach than did other liberal Justices.

Indeed, a subsequent development in Medellin demonstrates the foregoing. After the Court's decision in Medellin, Texas decided to proceed with the execution in question, without any effort whatsoever to abide by the procedural protections guaranteed by the international treaty and sought to be enforced by the international court. When a new petition came before the Court, Stevens then voted with his fellow liberals--and in opposition to the conservatives in the majority--to stay that execution.

Sooooooo, Stevens record is generally quite liberal. At least within the spectrum of the current Court, it certainly is. He is not quite as liberal as Ginsburg or Souter, or even Breyer. But his voting is much much closer to theirs than it is to the Court's conservatives. And (this just says the same thing a different way) his voting alignment with them is much higher than it is with the conservatives--and much much higher than it is with the most conservative Justices, Thomas and Scalia. Beyond that, even when Stevens has broken ranks and sided with the conservatives in reaching a result in a case, his positions are typically not entirely conservative. They are usually midway between conservative and liberal. He may not be siding with other liberals in those cases. But neither is he siding with the Court's most conservative Justices nor taking the most conservative position advanced. In short, even when he votes conservative, Stevens usually brings a liberal perspective to bear on his position.


Next up in the next post in this series: Scalia. Now that's a whole 'nother story entirely!!