[It's been a couple of weeks since we looked at the Supreme Court on New York Court Watcher. This blog (ok, me) has been preoccupied with the "merit" selection process in New York for picking judges for the Court of Appeals, the state's highest court. Specifically for picking a successor to Chief Judge Judith Kaye, who was forced to retire because of New York's asinine law mandating the retirement of Court of Appeals judges at age 70. In fact, the selection of Kaye's successor has almost consumed this blog's attention since the beginning of December. There were a few postings about the Supremes in December, but the Chief Judge selection process--with the attendant political brouhaha--has been the focus of most posts the past 2 months. The new Chief has not yet been selected. That will happen on or before January 15. In any event, there's certainly lots to discuss about the Supreme Court Justices. So let's get back to them.]
GRAPH 1:Chief Justice Roberts
Voting Alignments (%)
(click to enlarge) 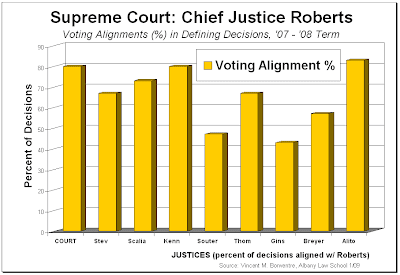 Thought we'd get started with a graph. Seems like a good eye-catching way to begin the topic at hand.

This graph depicts the frequency with which Chief Justice John Roberts voted with each of his colleagues (on the same side, that is) in the "defining decisions" of the last term--the Court's 2007-2008 term. Recall that these "defining decisions" are 15 particularly revealing ones which were identified previously. (See GRAPH-ic Total Recap - Supreme Court's 2007-08 Term: The Defining Decisions (Discrimination+Cultural Issues+Law & Order+Political Process), Nov. 26, 2008, and the several preceding posts in that series which are cited therein.) These decisions dealt with "hot button" matters that typically divide the Justices--just like they divide the rest of us--along political, philosophical, and cultural lines--i.e., discrimination, cultural issues, law and order, and political process. Graph #1 shows the percentage of those "defining decisions" in which Roberts was aligned with each of the other Justices.

For the next several posts, let's focus on one Justice at a time. Let's look at voting alignments--i.e., the frequency with which each Justice voted with each of the others. Let's also identify the cases in which the Justice in question broke ranks with his usual ideological allies--e.g., the decisions in which a typically conservative-voting Justice voted with the typically liberal-voting Justices and/or for the more liberal side of the Court's division on an issue. Together, the voting alignments and the "breaking ranks" will tell us a lot about each Justice. E.g., the Justice's usual allies, the strength of those alliances, and the kinds of issues which supersede those alliances and on which the Justice takes positions that diverge from his/her normal ideological leanings.

As is plain from Graph #1 above, this series of posts begins by focusing on Chief Justice John Roberts. Let's take a another look at that first graph, but this time let's order those same voting alignment percentages from highest to lowest. (Yes, "descending order." So I'll put that on the graph's title.)
GRAPH 2: Chief Justice Roberts
Voting Alignments (%) in Descending Order
(click to enlarge) 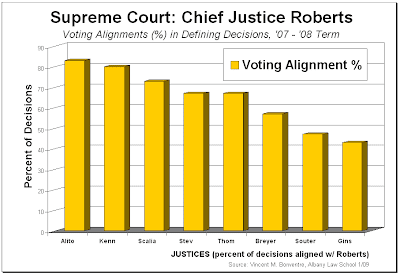 [As explained in earlier posts (see, Supreme Court's 2007-08 Term: The Defining Decisions (Part 3: Law & Order [nifty graph included!]), Oct. 4, 2008), the votes in each case are generally counted as either on one side of the issue decided by the Court or the other. In some cases, however, some votes seem more accurately treated as half and half. So, e.g., in Baze, on the constitutional validity of execution by lethal injection, the plurality opinion of Roberts was midway between the dissent of Ginsburg (joined by Souter), which argued that there were fatal constitutional problems, and the separate concurring opinion of Thomas (joined by Scalia), which saw no possible problem with lethal injection. So Roberts' vote, as well as the votes of those who joined him and his reasoning, is treated as in half agreement with the dissenters and half agreement with the separate concurrers. Similarly, in Moore, on the constitutional validity of a search conducted in violation of state law, although Ginsburg voted with the rest of the Court to uphold the conviction in question, her separate concurring opinion made clear that she took a significantly less pro-prosecution position than her colleagues. So her vote is treated as half with and half against the majority--which included Roberts. ]

In short, what seems most telling, is that Roberts aligned the most with the somewhat moderate conservatives, Alito and Kennedy. He aligned the least with strong liberals Ginsburg and Souter. Additionally, Roberts did not align with staunch conservative Thomas at a very high rate. In fact, no higher than he did with Stevens, who is a pretty consistently liberal vote on the Court.

First, here's with the Justices in order of seniority, and including the Court as a whole.
GRAPH 3: Chief Justice Roberts
Voting Alignments/Non-Alignments (#)
(click to enlarge) 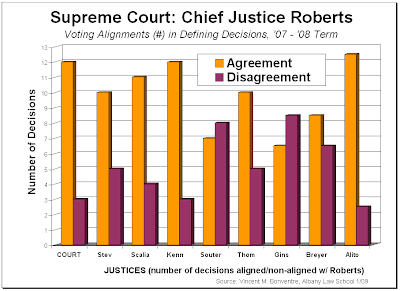 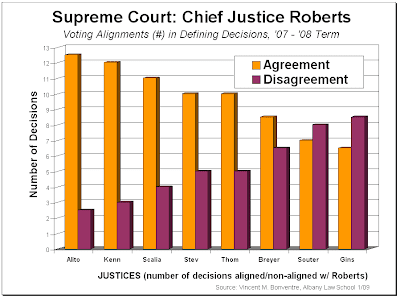 The value of re-depicting the data this way in these last 2 graphs is the visual contrast it provides between the frequency of Roberts' agreement and disagreement with each of his colleagues. The graphs make vivid that Roberts agreed with some Justices much more than he disagreed. And with others, he disagreed almost as much as he agreed. Depicting the data this way in these 2 graphs also visually underscores the fact that Roberts did have a not insignificant (ok, significant) amount of disagreement even with some of his ideological allies. So, for example, he disagreed with Thomas fully 1/2 as much as he agreed with him. And he disagreed with Scalia almost as much.

This leads us to the other important matter to cover in this post. On what cases--more pointedly, what kinds of issues--did Roberts break with his usual allies and take a position somewhat atypical of his normal ideological leanings. In short, on what issues did he break with conservatives and vote with, and more like, a typical liberal Justice.

Keep in mind that on most of the "cultural issues," "law & order," and "political process" decisions, Roberts voted for the more conservative position. In virtually all of those cases he voted for the same position as Thomas and Scalia. (Again, the "defining decisions" and the 4 different categories of cases included therein were spelled out previously on New York Court Watcher. See GRAPH-ic Total Recap - Supreme Court's 2007-08 Term: The Defining Decisions (Discrimination+Cultural Issues+Law & Order+Political Process), Nov. 26, 2008, and the several preceding posts in that series which are cited therein.)

But then there are the "discrimination" decisions. And there are 3 others: one categorized as both "cultural" and "law & order," one only as "law & order," and one as "political process." Indeed, the possibility of discrimination is present in all but one of these cases in which Roberts broke ranks. And even that one exception, dealing as it does with the death penalty, has at least the inseparable racial implications.

Among the decisions specifically categorized as "discrimination," Roberts broke with the conservative Justices and voted with the liberals in CBOCS (a claim against an employer for retaliating because of a racial discrimination complaint), Snyder (racial discrimination in jury selection), and Federal Express (an age discrimination lawsuit after an unheeded informal request to the EEOC for remedial action). He voted in favor of the claimant in each of those cases, and in doing so he took the opposite side from Scalia and Thomas.

The other 2 decisions with discrimination implications were: Kimbrough ("law & order"--upholding a sentence below the harsh guidelines for crack cocaine [n.b. the racial implications in the typically disparate treatment for crack versus powder cocaine]), and Crawford ("political process"--upholding a state voter identification law, but only on its face, thus allowing a future showing of discriminatory administration and impact; as opposed to Scalia, Thomas, & Alito who argued that such laws were justified period, regardless of possible incidental burdens; Roberts' vote in this case counts as 1/2 "breaking ranks").

The last case--the apparent exception to the common thread of discrimination--was Baze ("cultural" & "law & order"--upholding lethal injection only because not shown to cause unecessary suffering; as opposed to Thomas & Scalia who argued that only the most barbaric punishments such as drawing and quartering and burning alive would offend the Constitution; Roberts' vote in this case also counts as 1/2 "breaking ranks").

So there are the Roberts' "breaking ranks" votes. Of the 6 "defining decisions" involved, 5 clearly dealt with discrimination. The 6th involved the death penalty--again, never too far removed from concerns of disparate racial treatment. And in all 6, Roberts took a position at odds with the more conservative side of the issue in question.

So Roberts' record is generally quite conservative and he can be expected generally to vote with his colleagues on the right wing of the Court. On the other hand, where a case raises serious concerns about discriminatory treatment--and especially racial discrimination--Roberts displays a more liberal leaning and he frequently splits from his usual conservative allies.


In the next post in this series, we'll take a look at the Court's senior associate Justice--John Paul Stevens, one of the Court's more liberal members.