With Justice Ruth Bader Ginsburg battling cancer for the second time in several years, thoughts naturally go to the possibility of her leaving the Court. More than that, what would the Court be losing if she left? What has her record been? How has she sided on the issues? Which Justices has she been aligned with? Which Justices has she opposed? How frequently has she been on the winning side? How often has she taken issue with the majority? In short, how has she been voting, and where does it place her within the Court?

A series of posts on the New York Court Watcher has been examining the record of the Court and of the individual Justices in the "defining decisions" of the Court's last term--i.e., Fall '07 to Spring '08. As explained previously, these are 15 particularly revealing decisions from last term. (For a discussion of these decisions, see Supreme Court's 2007-08 Term: The Defining Decisions (Intro), September 11, 2008, as well as GRAPH-ic Total Recap - Supreme Court's 2007-08 Term: The Defining Decisions (Discrimination+Cultural Issues+Law & Order+Political Process), Nov. 26, 2008, and the several preceding posts in that series which are cited therein.)

In this post, the first of 2 parts (or maybe 3), we'll look at Ginsburg's record in these "defining decisions." Her record is pretty clear. Where she stands on the issues and where she fits within the Court is pretty straightforward.

First, on the 15 "defining decisions" as a whole, the following graph depicts her "liberal/conservative" voting record, and her position within the Court's ideological spectrum. Specifically, it depicts the frequency--in terms of percentage of the 15 cases--in which Ginsburg and each of her colleagues voted for the liberal and conservative positions respectively. 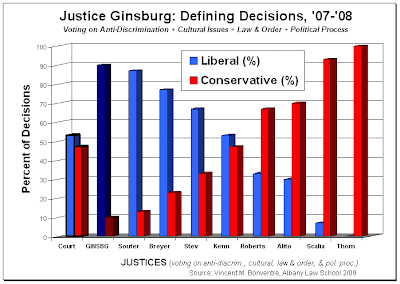 As is plain from Graph 1, Ginsburg's voting record is considerably more liberal than that of the Court as a whole (i.e., the Court's decisional record) and, in fact, considerably more liberal than the records of most of her colleagues. Justice David Souter's voting was the closest to hers, followed by Justices Stephen Breyer and John Paul Stevens. Together, those 4 comprise the Court's liberal wing. Ginsburg's record places her well within that wing and, indeed, at its most liberal end. Viewed from a different perspective, her record is the diametrical opposite of that of Justices Clarence Thomas and Antonin Scalia, who are at the most conservative end of the Court's ideological spectrum. (For more discussion on the records of all the Justices in the "defining decisions" as a whole, see GRAPH-ic Total Recap - Supreme Court's 2007-08 Term: The Defining Decisions (Discrimination+Cultural Issues+Law & Order+Political Process), Nov. 26, 2008.)

Not surprisingly--almost, necessarily--Ginsburg's record in each of the 4 different categories within the "defining decisions" is also quite liberal. The first category, anti-discrimination cases (i.e., cases in which the Court resolved a claim of some form of illegal discrimination), there were 4 decisions. The following graph depicts how Ginsburg and each of her colleagues voted. Specifically, it depicts the number of cases, out of the 4, in which Ginsburg and each of her colleagues took the liberal and conservative positions, respectively (i.e., voted in favor or against the party complaining of discrimination.) 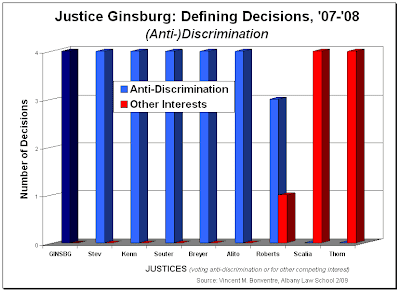 In the "cultural issues" cases, Ginsburg's record was similarly 100% liberal. Whether guns, the death penalty, Gitmo detainees or the other issues which the Court confronted in these 5 "defining decisions," Ginsburg took the position favored by political liberals each time. 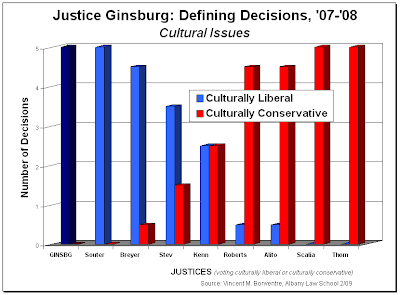 While Souter voted with Ginsburg every time, and Breyer nearly so, her diametrical opposites again were Thomas and Scalia. She and they took the opposing positions in each of the 5 cases. Her position on these "cultural issues" was also opposed by Chief Justice John Roberts and Justice Samuel Alito to virtually the same extent. (For a fuller discussion on these "cultural issues" cases and the Justices' voting, see Supreme Court's 2007-08 Term: The Defining Decisions (Part 2: Cultural Issues), Sept. 20, 2008.)

In the "law and "order" cases, Ginsburg again had the Court's most liberal voting record. There were 6 cases in this category: 1 was also an anti-discrimination case (race-based jury selection), 2 were also "cultural issues" cases (death penalty cases), and 3 were exclusive to law and order. 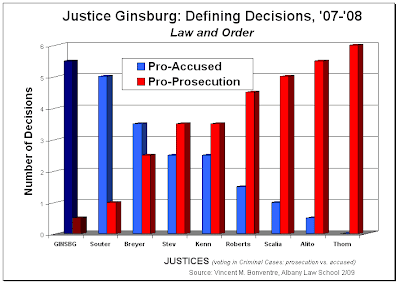 As depicted in Graph 4, Ginsburg sided with the accused, voting for the position more favorable to the rights of the accused, more frequently than any of her colleagues. She did so in every case but one. And in that case, she actually took issue with the position adopted by the Court and, in a separate concurring opinion, argued for one that was less pro-prosecution. Souter's voting record was, again, most similar to hers. Thomas's 100% pro-prosecution record was at the Court's opposite extreme from Ginsburg's. Alito's, Scalia's, and Roberts's records, though slightly less pro-prosecution than Thomas's, were also at the opposite end of the Court's spectrum from Ginsburg. (For more discussion of these "law and order" cases and the Justices' voting, see Supreme Court's 2007-08 Term: The Defining Decisions (Part 3: Law & Order [nifty graph included!]), Oct. 14, 2008.) 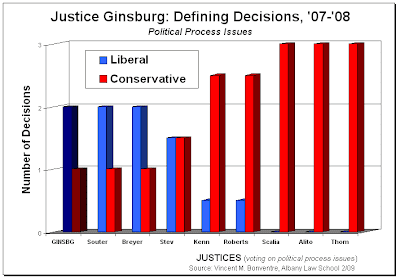 As shown in Graph 5, Ginsburg's record contrasted most sharply with that of Thomas, Alito and Scalia. She voted the opposite of them in 2 of the 3 cases. They had taken the politically conservative position in all 3 cases. (For more discussion on the "political process" cases and the Justices' voting, see Supreme Court's 2007-08 Term: The Defining Decisions (Part 4: Political Process), Nov. 8, 2008.)

Now let's add up all the cases--all the "defining decisions." Here's how Ginsburg's cumulative voting record in the 15 cases looks, and how her record contrasts with that of her colleagues and the Court's decisional record. 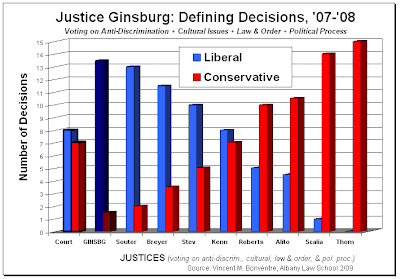 Again--hopefully the repetition has not become ad nauseam--Ginsburg's voting record is the most liberal on the Court. It is not as liberal as Thomas's or Scalia's are conservative. But like those two, her record places her at one end of the Court's ideological spectrum. As her voting in the 15 "defining decisions" cases strongly suggests--both in total and in the 4 individual categories of cases--she has simply been the most consistent liberal on the Court.

If Ginsburg's medical condition should cause her to leave the Court [Every decent human being, of course, hopes that she recuperates fully and does well for a long long time.], it will have lost its most reliable liberal vote. It's most consistent vote on the opposite side of the Court's political spectrum from Thomas and Scalia--as well as their frequent allies, Roberts and Alito. The vote most often taking issue with the Court's generally politically conservative jurisprudence.

Presumably, if President Obama had to replace Ginsburg, he would choose an appointee with liberal bona fides. He's not going to appoint a conservative. Anything is possible, but that is most unlikely. On the other hand, there is no guarantee that his appointee would remain a liberal on the Court. Presidents have been known to be mightily disappointed--even fooled. (See Bush 41 appointing Souter.)

So nothing is a sure bet. But one thing is pretty sure. Ginsburg has a track record. It's liberal. There is no indication she is changing. Indeed, there is every indication that her voting is pretty liberal across the board and can be counted on to be so in most "hot button," controversial, ideologically and politically charged cases. That may be a good or bad thing depending on the beholder's own ideological and political perspective. But as long as Ginsburg remains on the Court, it is a pretty clear and reliable thing.

In the next post, we'll look at Ginsburg's voting alignments among the Justices and her frequency in the Court's majority and dissent.