Yesterday's post on the New York Court Watcher looked at Justice Ruth Bader Ginsburg's ideological voting record in the "defining decisions" of the Court's last term. It outlined and graphed how she voted--and how her voting compared with that of her colleagues. Her record was viewed for the 15 cases taken as a whole, as well as for each of 4 categories of cases within that total: anti-discrimination, cultural issues, law and order, and political process. (See Supreme Court: Ginsburg's Place Among Her Colleagues--A Voting Profile (Part I), Feb. 22, 2009.)

In this 2d part of our focus on Ginsburg, we'll take a look how frequently Ginsburg has been in the Court's majority, and how frequently she has taken a position at odds with that adopted by the Court. In short, the frequency with which she has been on the winning and losing sides of the Court's decisions.

First, how often has Ginsburg been part of the Court's majority? Graph 1 shows the number of "defining decisions" in which the Court adopted the same position that Ginsburg voted for, and for comparison purposes, it shows the same for each of her colleagues. 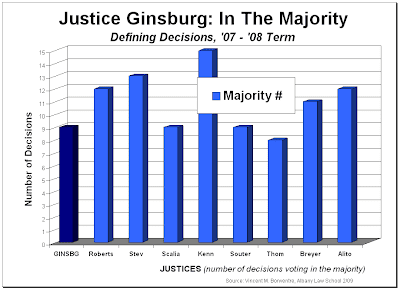 As Graph 1 makes clear, Ginsburg has not been part of the Court's majority nearly as often as many of her colleagues. She has voted with the majority considerably less, for example, than Justices Anthony Kennedy and John Paul Stevens and Chief Justice John Roberts. Placing Ginsburg's record among those of the other Justices, in order of frequency in the Court's majority, underscores the extent to which Ginsburg has typically not been part of the Court's governing coalition. This is depicted in the next graph.

GRAPH 2: Justice Ginsburg
Frequency in Majority (#)
(In Order of Frequency)
(click to enlarge) 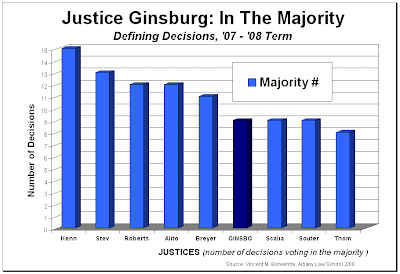 As shown in this graph, 5 Justices were in the majority--on the winning side of the Court's decisions--more frequently than Ginsburg. In fact, she was among 3 Justices (Antonin Scalia and David Souter, in addition to herself) who were on the losing side of the Court's decisions more frequently than the others, except for Clarence Thomas. Ginsburg's majority record contrasts most starkly with that of Justice Kennedy, who was on the Court's winning side in every one of the "defining decisions." That's not surprising inasmuch as Kennedy has been the Court's swing vote--especially since the departure of Justice Sandra Day O'Connor--and, thus, has pretty reliably been the determining factor in the close cases. But Ginsburg's majority record also pales in comparison with that of 3 other Justices: Roberts, Stevens, and Alito. (For more discussion on the Justices' majority voting records, see Supreme Court: Justices In The Majority (Part 2--And Compared to In Dissent), Dec. 17, 2008; and Supreme Court: Justices In The Majority, Dec. 8, 2008.)

Looking at the flip side of this--i.e., looking at the dissent records of Ginsburg and her colleagues--provides another perspective. Same data, different view. It underscores how frequently Ginsburg opposed the Court's decisions, and how her record in that regard compares with that of her colleagues. Take a look. 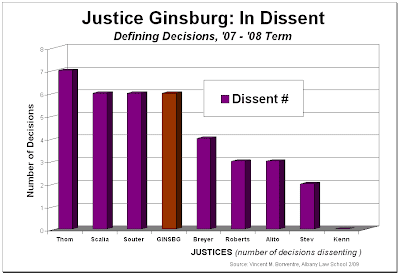 As depicted in Graph 3, only Justice Thomas opposed the Court's decisions more frequently than Ginsburg. Only he was on the losing side in more of the cases than she. Her dissent record, together with that of Justices Scalia and Souter, was the Court's highest--again, except for Thomas's. Clearly, she was on the losing side of the "defining decisions" much more often (twice or more, in fact) than Justices Kennedy, Steven, Alito, and Chief Justice Roberts. (For more discussion on the Justices' dissent voting records, see Supreme Court: Justices In The Majority (Part 3--In Dissent Over What?) , Dec. 20, 2008.) 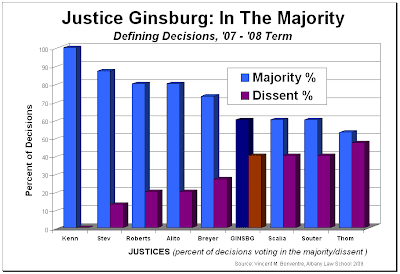 Compare Ginsburg's record to Kennedy's and to Thomas's. Kennedy has clearly been winning, or at least he's been voting on the winning side of the Court's decisions. Indeed, in 100% of the "defining decisions." Ginsburg, by sharp contrast, has been winning, or voting that way, much less frequently. The flip side is that while Kennedy was never in dissent in these cases, Ginsburg was quite frequently. 40% of the time.

On the other hand, Ginsburg's majority/dissent record is close to that of her ideological opposite on the Court, Thomas. Her relatively low rate in the majority and high rate in dissent are not much different than his. Thomas's majority/dissent record is at the opposite end of the Court's spectrum from Kennedy's, and Ginsburg's record resembles Thomas's much more than it does Kennedy's. Indeed, the only Justice on the Court with a lower majority rate and higher dissent rate than Ginsburg is Thomas. And her majority rate is not much higher-- her dissent rate not much lower--than his.

In the next post, we'll take a look at how frequently, or infrequently, Ginsburg voted on the same side with each of her colleagues. In short, which Justices have been her usual allies, and which her usual adversaries.