NY Court of Appeals: The Dissenting Dynamics Continue Under Lippman [and graphs are back!]

It's no fluke. Apparently not an aberration at all. Not even simply a court finding its way with a new Chief Judge.

The rise in dissents that we saw when Jonathan Lippman assumed the center seat at New York's highest court has persisted. We discussed the increased dissents early on in this blog. The New York Times even weighed in.

Chief Judge Lippman himself made clear that his emphasis was quite different than that of his predecessor, Judith Kaye, who prized decisions where the judges spoke with one voice. As he told the Times' William Glaberson : "I am a result oriented person, and the result I am looking for is not necessarily unanimity."

Indeed! Unanimity has certainly taken a back seat under Lippman. Take a look. 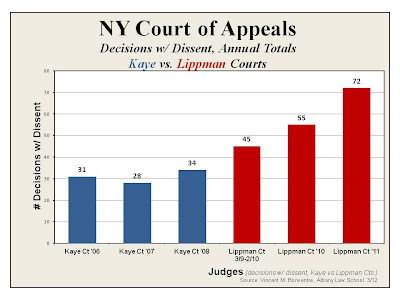 As the above graph shows, divided decisions are unquestionably on the rise. And dramatically so. The number of decisions with at least one judge dissenting has increased, and has continued to do so.

The dynamics of dissent, of open discussion of differences of opinion, has persisted. It is not just a blip. It has been a hallmark of the Lippman Court. A pretty sharp contrast with the Court under Kaye.

What began in the first 12 months of Lippman's tenure as Chief Judge, has developed into a lasting characteristic of his Court. A characteristic that has become even more pronounced. By the end of the last full calendar year, the number of decisions with dissent had more than doubled the number for the Court under Kaye.

And what about the individual Judges? The total number of decisions with dissent has increased substantially. So, some of the Judges must be dissenting more frequently. But who? And how much more? 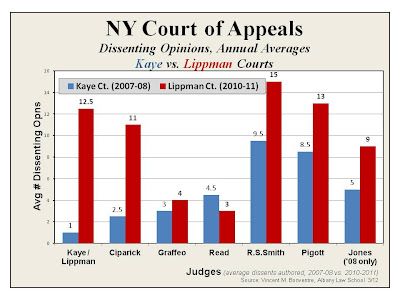 As would be expected, the Judges have, generally, increased the number of dissents they are writing. Some have increased a great deal.

The only Judges whose dissent-writing numbers remained approximately the same under Lippman as under Kaye are Victoria Graffeo and Susan Read. And only Judge Read actually averaged fewer dissenting opinions under Lippman.

In short, the dynamics at the Court of Appeals--at least what has been aired publicly in deciding cases--has changed significantly. The issues are debated more openly. Indeed, openly as opposed to silenced or submerged or glossed over or otherwise concealed before decisions see the light of day.

The merits and weaknesses of opposing sides of issues are being discussed in competing opinions that are published. That are available for the bench and the bar and the public generally to scrutinize. To weigh for themselves. Competing opinions that stand or fall on their comparative, persuasive strengths--rather than on which side happens to win in the Judges' secret conference, and which side never is made pubic.

Well, that's a big change. Some may see it as healthy. [I do.] Some may prefer more unanimity, with the Judges speaking as one on whatever position gains a majority vote. There are surely differences of opinion as to the merits of the 2 approaches.

But there can be little difference of opinion about whether dissents have increased with Lippman as Chief. They most certainly and dramatically have. And that dissenting dynamic has persisted.

In the next post we'll look a bit more closely at who's dissenting, how much, and how changed.


[For the early discussion on New York Court Watcher of rising dissents under Lippman, see NY Court of Appeals: Dissents Up With CJ Lippman [and graphs to show!], Aug. 17, 2009. For the discussion in the NY Times, see William Glaberson, Dissenting Often, State’s Chief Judge Establishes a Staunchly Liberal Record, Oct. 9, 2011.]