Here are the extremes: 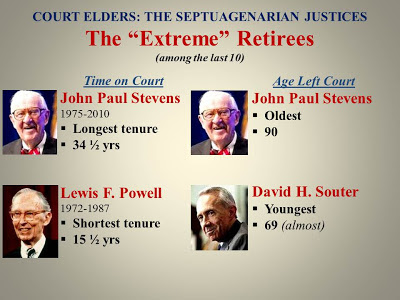 That's Justice John Paul Stevens, appointed by President Ford and the Court's last retiree, at one end of the range with the longest tenure among the recent retirees. His 34 1/2 years is one of the longest in Court history. (William O. Douglas, an FDR appointee, holds the record at 36 1/2 years.)

Justice Lewis Powell, the 3rd of President Nixon's 4 appointees, is at the other end with his 15 1/2 years being the briefest tenure among the last 10 retirees. (James F. Byrnes, the last of FDR's 9 appointees, holds the record with a mere 15 months.)

As for age at retirement, that's Stevens again at one end as the oldest--and, at 90, one of the oldest retirees in Court history. (Oliver Wendell Holmes, a TR appointee, was several months older--just a few weeks short of his 91st birthday.)

At the other end is President Bush 41's appointee, Justice David Souter, whose retirement at (nearly) 69 years of age makes him the youngest to retire among recent Justices. (Justice Benjamin Curtis, appointed by President Fillmore, was apparently the youngest to leave the Court. He resigned at the age of 47, appalled by the Court's decision in the Dred Scott decision, against which he authored a dissenting opinion.)
[I've summarized the time-on-the-Court and retirement age data for the last 10 retirees in a Table that's accessible HERE.]

Here are the recently retired Justices whose retirements were at or closest to those figures: 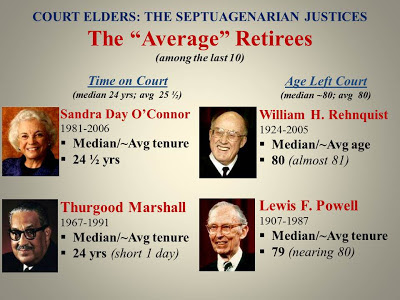 And that's Nixon's final (4th) appointee and Reagan elevatee to Chief Justice, William Rehnquist, and Nixon's previous (3rd) appointee, Justice Lewis Powell, who both left the Court at the average or median age. Rehnquist died in office at the age of 80; Powell retired at 79.

So what does all this mean, or might it mean, regarding the current members of the Court? Specifically, with regard to who might depart in the near future--and more specifically, during Obama's 2nd term?

Well, take a look at this: 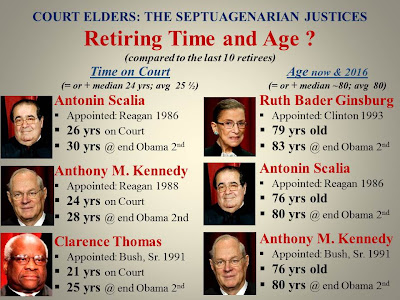 As for time on the Court, by 2016, none of the Justices will yet be at the 34 1/4 year mark of Justice Stevens when he retired. But 3 of the current Justices will have passed the 24 year average/median mark. Justice Scalia's 30 years on the Court will be well beyond that mark, and even approaching the tenures of those Justices, like Stevens, who have served the longest.

Justices Kennedy's and Thomas's time on the Court will have surpassed the average--Kennedy's by several years.

Regarding age, none of the current Justices will have reached the nonagenarian status of a Stevens or Holmes. But 3 will have reached or passed the average/median age of the recent retirees. Justice Ginsburg will be a few years older; Justices Scalia and Kennedy will be at right at the mark.

To be sure... none of this is predictive.

Scalia could remain on the Court till he's been there for 40 years, in 2026--he'd only be as old as Stevens was when he left the Court. That's 90. And if Ginsburg were to remain till she were 90 [And who doesn't wish that heroic and inspiring woman lives to 100 + 90?], she would not be leaving till 7 years after Obama's 2nd term ended.

Nevertheless, playing the odds and the likelihoods [And come on, who doesn't like to do that?], the fact of the matter is that before the end of President Obama's 2nd term in 2016, Justices Scalia, Thomas, and Thomas will have been on the Court longer than has been typical. And Scalia, considerably longer.

Also, Justices Ginsburg, Scalia, and Kennedy will have reached the age that has been typical for retirement. And Ginsburg will have passed it by a few years.

Beyond that, Scalia and Kennedy fall into both categories.

At least based on when Justices have left the Court in the past, 2 conclusions can be reached:
One: who knows? There are far too many factors, and the range of tenure and age are too great and varied.
Two: based on averages or medians or what seems most typical, the most likely to retire while Obama is still President--thus affording him the opportunity to appoint replacements--are Scalia (longest on the Court), Ginsburg (oldest on the Court), and Kennedy (at or beyond the average or median in both categories). Again, the Court's current septuagenarians.

But any such likelihoods are based only on time on the Court and age.

For Scalia, he surely would not want to retire while Obama is the President, who would almost certainly replace him with a liberal.
For Kennedy, he's having far too much fun being the most powerful person on the Court, as the swing vote in most high profile cases.
For Ginsburg, her health issues may well trump any other considerations.

Well, that's it for this series. The septuagenarians, the "yoots," the retirees, the likelihoods, and a little bit of related Court trivia thrown in.

And in the meantime, the Justices have agreed to confront the issue of same-sex marriage! There's always somethin'.

[BTW, in case you're interested in reading a lot more about a lot more about the Supreme Court from the foremost expert on all things Supreme Court, University Of Virginia Professor Emeritus Henry J. Abraham, see his JUSTICES AND PRESIDENTS [AND SENATORS in later editions], which I have relied upon heavily for much of the info in this series--and, indeed, for much of what I know and write  and teach about all things judicial.]