Justices Sonia Sotomayor and Elena Kagan, both appointed by President Obama, are the Court's newest members. Sotomayor joined the Court in August 2009. Kagan in August 2010. Consequently, unlike the other Justices whose records we have already reviewed, Sotomayor and Kagan have participated in only a few of the racial discrimination cases decided by the Court under Chief Justice Roberts.

Sotomayor has participated in only 7. Kagan in only 5. That's not much of a record for either Justice. Indeed, the sample is simply too small to tell us anything meaningful for some of the categories of voting we've been considering.

On the other hand, for some categories, the voting patterns for Sotomayor and Kagan are so consistent and so clear that even the relatively small samples are revealing. Let's take a look. 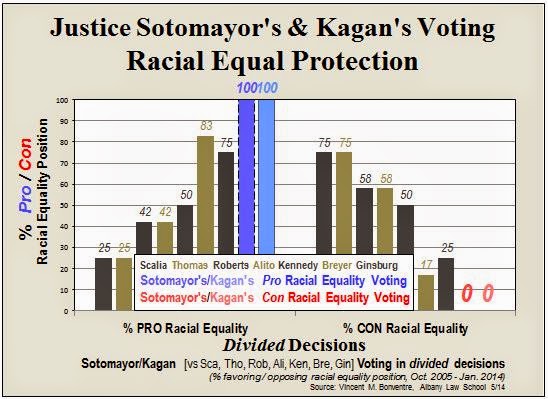 The figures depicted in graph 1 reflect voting in 5 non-unanimous cases for Sotomayor, and 4 for Kagan. Notably, although the samples are relatively small, both Justices voted in support of strict equal treatment in every one of the cases in which they participated. These involved enforcing voting rights protections, supporting racial discrimination lawsuits, enforcing laws against retaliation, and prohibiting racial preferences in college admissions absent the showing of a compelling need. 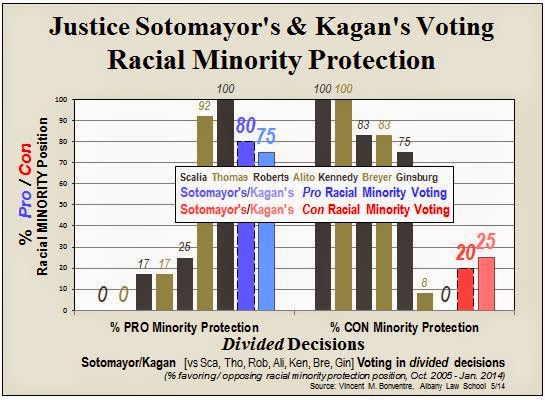 In each of the divided cases in which they participated--again, 5 for Sotomayor and 4 for Kagan--they supported the position that would protect or otherwise benefit Racial Minorities, except for one. As just noted, that was the Fisher case in which they joined the Republican Justices to restrict racial preferences in college admissions. In every other case, Sotomayor and Kagan supported whatever measure or lawsuit or other position would benefit Racial Minorities.

The significance of this, despite the small sample of cases, is underscored by the contrast with the voting of other Justices. While Sotomayor and Kagan voted in support of the position that benefited Racial Minorities in every case in which they participated but one, the 5 Republican Justices all voted against that position in every one of those cases.

In fact, as depicted in graph 2, even when considering all the racial discrimination cases decided in the Roberts era--before as well as after Sotomayor's and Kagan's appointments--the 5 Republican Justices rarely voted for the position that benefited Racial Minorities. And as we've seen in previous posts, Scalia and Thomas never did. The contrast with Sotomayor and Kagan (as well as with the other Democratic Justices) could hardly be greater.

Finally, and solely for the sake of completion and consistency with how we've reviewed the records of the other Justices in previous posts, here's a graph depicting Sotomayor's and Kagan's records of support for complaints brought by Whites and those brought by Racial Minorities--even though based on an insignificant number of cases.
GRAPH 3 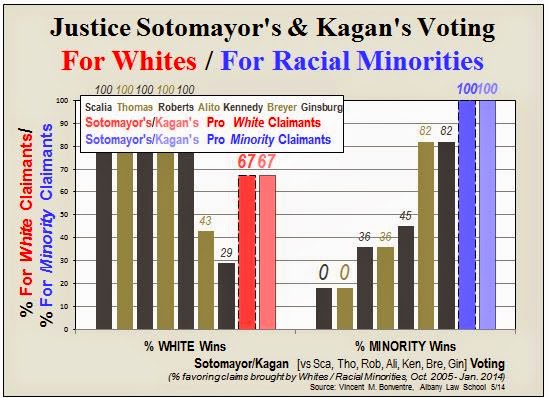 Graph 3 reflects Sotomayor's and Kagan's participation in only 3 cases involving complaints brought by Whites--unanimous as well as divided. They both supported the White complainant in 2 of them (i.e., a unanimous decision about redistricting, and the 8-1 Fisher case on racial preferences in college admissions), and opposed the White complainant in 1 (i.e., dissenting in the 5-4 decision that invalidated part of the Voting Rights Act). Not much can be gleaned from that sample--at least not when viewed in isolation.

Let's now confine ourselves to the non-unanimous cases.
GRAPH 4 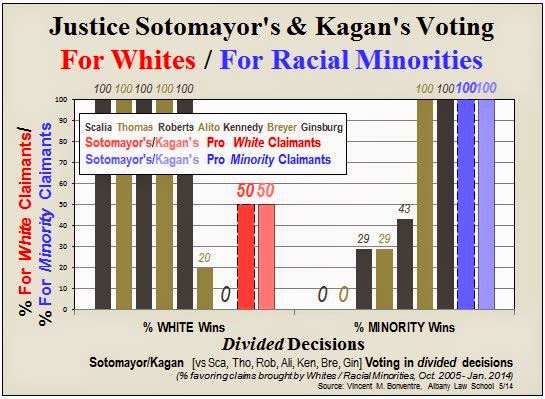 In short, although the samples of cases in which Sotomayor and Kagan voted are relatively small, they do provide some fairly clear insights. This is especially true when their records are compared with those of the other Democratic Justices and contrasted with those of the Republicans on the Court.


In the interest of full disclosure, in the next post in this series--and, perhaps the final one--I'll disclose what my own voting record would be and graph that hypothetical voting alongside the Justices' records.