Not quite Scalia or Thomas.
Far different from Ginsburg and Breyer.
Not Kennedy either.
But identical to Roberts.
Justice Alito's record and theirs, that is.

White complainants win Alito's votes.
Racial Minority complainants, not so frequently. But more often then they win Scalia's or Thomas's vote.
Those advocating simple equal treatment--i.e., race neutrality, color-blindness, same rights regardless of race--have won his vote about half the time.
Those advocating more specifically for the protection of Racial Minorities have not fared well with him. 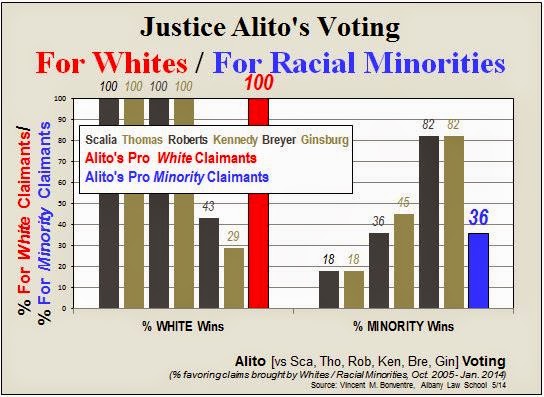 As shown in graph 1, Justice Alito--just like the other 4 Republicans on the Court--has voted in favor of the White complainants in every case involving an issue of racial discrimination. By contrast, he usually voted against Racial Minority complainants--again, like the other Republican Justices.

Now, to sharpen the focus, let's limit our consideration to those cases that resulted in non-unanimous decisions. 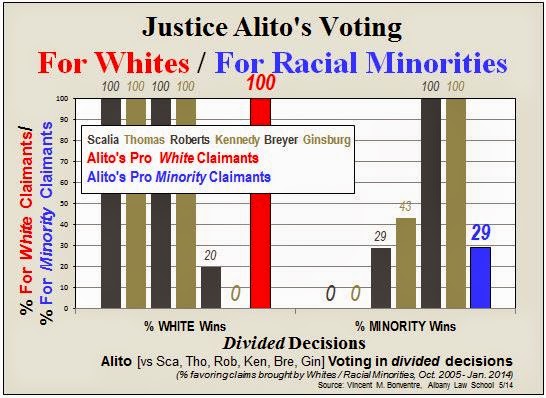 In those closer cases where the Justices were divided, Alito's voting in support of complaints brought by Racial Minorities drops to 29%. His record contrasts sharply with that of Ginsburg and Breyer who voted for the Racial Minority complainant in every one of those cases.

On the other hand, Alito has still been more sympathetic to Racial Minority complaints than Scalia and Thomas. Unlike those 2, who never sided with Racial Minorities in these cases, Alito did so at least sometimes.

Like Chief Justice Roberts, Alito voted with the majority in CBOCS West v Humphries (2008) to hold that it was a civil rights violation (Civil Rights Act section 1981) to retaliate against an employee for complaining about racial discrimination, and that an employer would be liable for doing so. And in Snyder v Louisiana (2008), again like Roberts, he voted with the majority to condemn the prosecution's exclusion of jurors based on their race. Scalia and Thomas dissented in both of those cases. 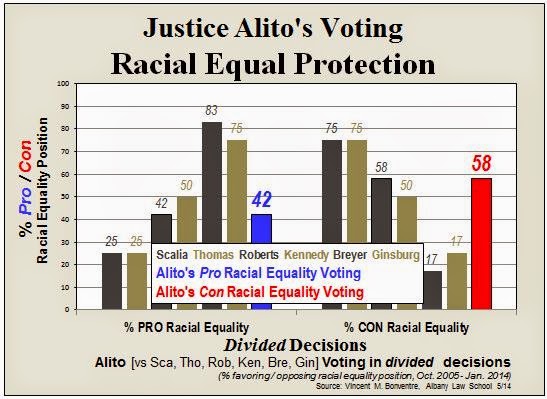 As shown in graph 3, Alito has been more supportive of race-neutral, colorblind, simple equality than Scalia and Thomas, not nearly as supportive as Ginsburg or Breyer, and similar to Roberts and Kennedy. 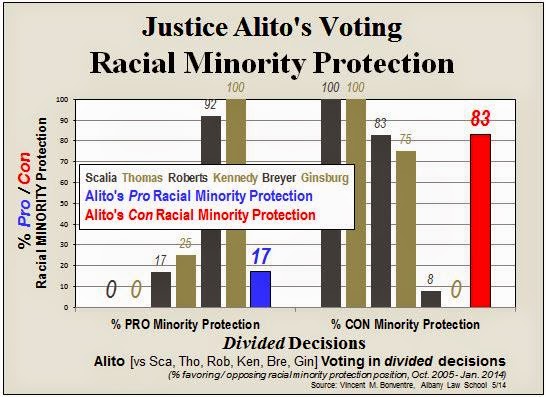 As previous noted, Alito supported the Racial Minority complainants in the CBOCS and Snyder cases--Scalia and Thomas did not. But other than those 2 cases, Alito, like Roberts, always voted against the position advocated for the protection of Racial Minorities in these non-unanimous cases. Indeed, as stated at the outset, Alito's record is identical to that of Roberts.

Next in this series, we'll take a look at the voting of the Court's 2 newest members: Obama appointees Sotomayor and Kagan.