Like Justice Ginsburg, whose record we looked at in the immediately preceding post, Breyer is a President Clinton appointee. Meaning? A Democrat, and much more ideologically liberal than the Republican appointees on the Court.

So we would certainly expect that his voting has been more protective of Racial Minorities than that of Chief Justice Roberts and that of Justices Scalia, Kennedy, and Thomas, who we have focused on previously in this series. Let's see if Breyer's record bears that out. Take a look. 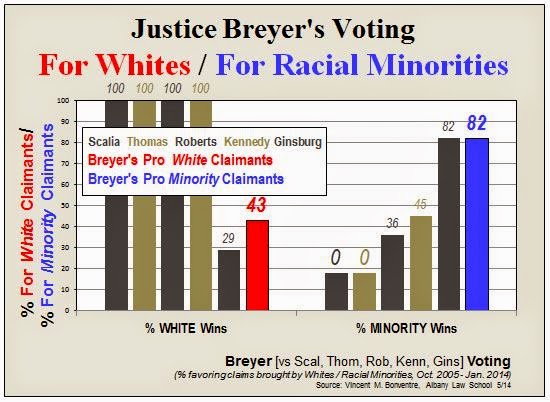 Breyer voted to uphold complaints brought by Whites (43% of the time) less frequently than did the Republican Justices (100%). But he did vote with them in Fisher v. University of Texas to require the strictest scrutiny of racial affirmative action in higher education admissions. That is, any racial preference can only be justified by proof of a compelling necessity. Breyer thus split, in that case, with Justice Ginsburg who dissented.

Let's now zero in on those closer cases in which the Justices can't agree and must choose sides. Those cases that provide the insight gained from exposing the actual divisions on the Court that unanimous decisions conceal. Here, then, Breyer's record in the divided cases. 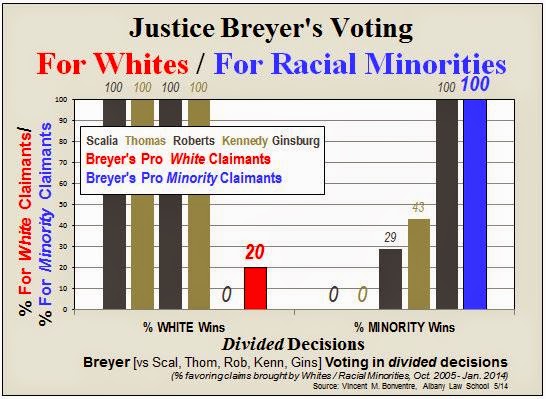 The contrast between Breyer's voting and that of his conservative Republican colleagues is certainly sharpened when we focus on the non-unanimous decisions. While they--i.e., Roberts, Scalia, Kennedy, and Thomas--supported every claim registered by Whites, Breyer was much less sympathetic to them. And exactly the opposite when it came to the claims of Racial Minorities. Indeed, like Ginsburg, Breyer supported every one of the Racial Minority complaints in the divided cases.

What about his voting as a matter of purely equal treatment of the races?
GRAPH 3 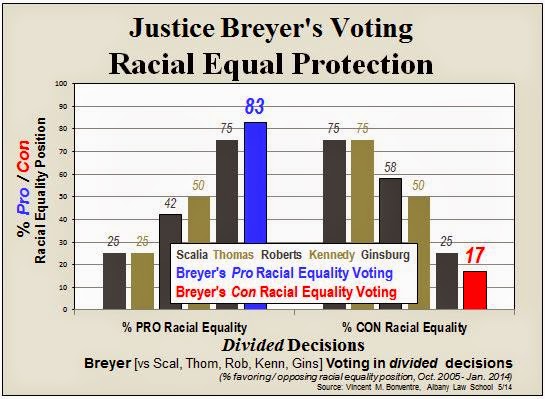 Once again--and hardly surprising--Breyer's voting has been most like Ginsburg's. Regarding the enforcement and promotion of equal treatment, whether for the protection of Racial Minorities or Whites, Breyer's record is much stronger than that of the Republican Justices.

In fact, even stronger than Ginsburg's record. He, unlike she, voted with the Republicans in Fisher to eliminate racial preferences in higher education admissions except in very rare circumstances.

Finally, what about Breyer's record, not on strictly equal treatment, but on protecting Racial Minorities? Let's see. 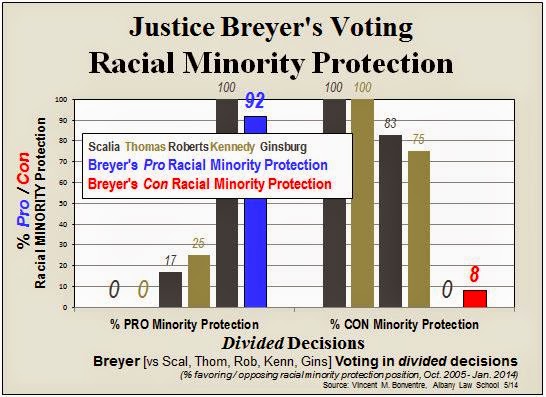 Not surprisingly, Breyer's voting has been far more supportive of Racial Minorities than that of any of the Republican Justices. When it comes to protecting Racial Minorities from discrimination and promoting measures intended to protect them and eradicate unequal treatment of them, his record dwarfs theirs. In fact, his record is identical to that of Ginsburg, except for the affirmative action case of Fisher.

So what can be said about Breyer's record?
Extremely sympathetic to complaints brought by Racial Minorities; much less so for those by Whites.
Very supportive of equal treatment, regardless of whether Whites or Racial Minorities happen to benefit in a particular case.
And extremely protective of Racial Minorities, their interests, and measures intended to protect them from discrimination.

Next post in this series: Justice Alito, whose voting is sure to contrast sharply with Breyer's.