This past week, in Schuette v. Coalition to Defend Affirmative Action, the Court upheld Michigan's recently adopted ban on affirmative action--i.e. race conscious decisions--in state university admissions. The vote was 6-2. (Justice Kagan did not participate.) Not surprisingly, all 5 Republican Justices supported the ban . Not a single one of them thought there was a problem with the voters of a state outlawing admissions programs that had sought, for compelling reasons (the only ones constitutionally allowed), to increase the college enrollment of racial minorities. Not one. Straight party line.
Among the Democratic Justices, Breyer wrote separately to agree with the Republicans, but on narrower grounds specific to this particular case. Justice Sotomayor dissented in a lengthy opinion joined by Justice Ginsburg.
For now, let's continue with our look at voting records compiled even before the Schuette decision.

A victim of gender discrimination early in her career. The nation's foremost litigant to eliminate gender discrimination. Appointed to the Court by Democratic President Bill Clinton. A predictably liberal vote on ideologically charged issued--e.g., civil rights, rights of the accused, campaign finance, etc.

So what about Ginsburg's voting on racial discrimination issues? Even before examining her record, what would be expected? Anything like Scalia's or Thomas's records? Or the polar opposite?

Of course it's just what would be expected. (I.e., the polar opposite of Scalia's and Thomas's record, for those who might not follow the Court.) And perhaps even more so. 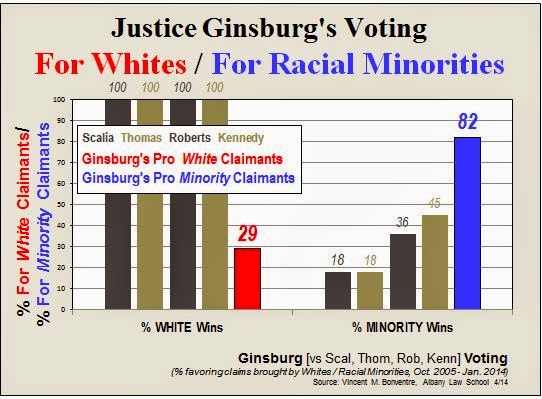 As depicted in graph 1, Justice Ginsburg voted to uphold complaints brought by Whites much less frequently than did the Republican Justices we've looked at previously in this series--i.e., Chief Justice Roberts, and Justices Scalia, Kennedy, and Thomas. She supported White claimants in 2 out of 7 cases, or 29% of the time. That compared to 7 out of 7 cases, or 100% of the time, for each of the Republican Justices.

As for the complaints brought by Racial Minorities, she voted to uphold them much more frequently than did the Republican Justices. Her record: 9 out of 11 cases, or 82% of the time she supported the Racial Minority claimants. That compared to 2 out of 11 cases (18%) for Scalia and Thomas, 4 out of 11 for Roberts (36%), and 5 out of 11 (45%) for Kennedy.

But let's now focus on those closer, divided cases. What was Ginsburg's record in those cases where the arguments on both sides were strong, and a Justice would certainly have good reason to vote either way? Here it is.
GRAPH 2 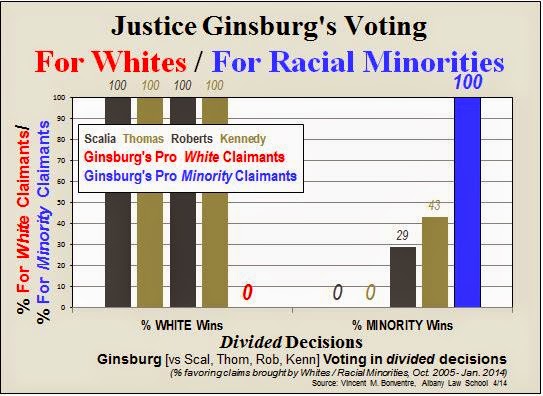 So where Whites complained about the Voting Rights Act or affirmative action or redistricting or some similarly race-related matter, she voted against the complaint. On the other hand, where Racial Minorities complained about employment discrimination or retaliation or mandatory arbitration or redistricting or other race-related matters, she voted to uphold the complaint.

What about Justice Ginsburg's record on issues of equal treatment? I.e., on treating the races equally or the same, or promoting measures intended to do that. Let's see.
GRAPH 3 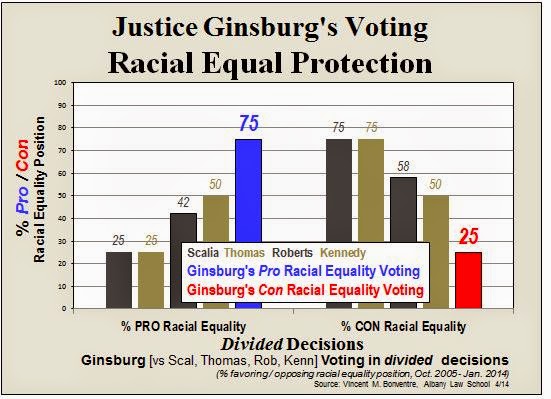 In those closer, divided cases involving issues of equal treatment of the races, or measures prohibiting unequal or different treatment--regardless of whether the complaint was brought by Whites or Racial Minorities--Ginsburg's record is more pro-equality than any of the Republican Justices we've previously examined. It is much more so than that of Scalia or Thomas.

Stated otherwise, in cases involving dissimilar treatment on the basis of race, or violations of equal treatment or of measures designed to insure equal treatment--without any regard for the race of the victim or the beneficiary--Ginsburg voted for the equality position (75%) more frequently than Roberts (42%) and Kennedy (50%). And much more frequently than Scalia and Thomas (both 25%). 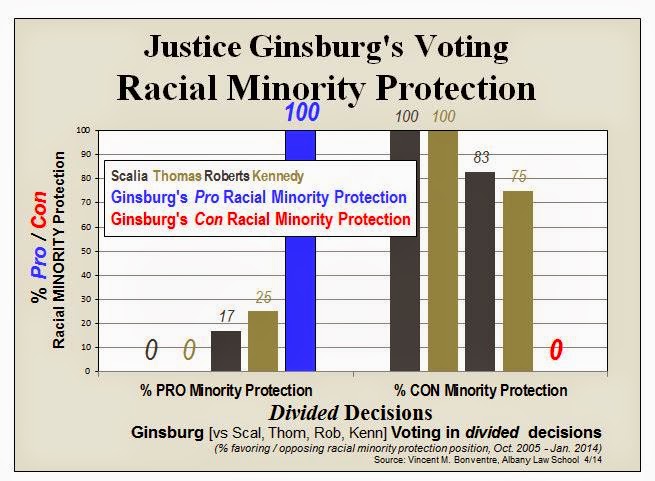 Again, to place her record in context, while she voted in every one of these cases in favor of Racial Minorities (100%), Scalia and Thomas never did (0%). Roberts (17%) and Kennedy (25%) rarely did.

It takes no genius to see that Ginsburg's record evinces an overriding sympathy for the victims of historic racial discrimination. A heightened sensitivity to their persisting disadvantaged status and disfavor at the hands of the majority.

She, unlike her Republican, more conservative colleagues, is much more supportive of programs and policies intended to ameliorate the continued plight of Racial Minorities. To be sure, that includes her support of programs and policies that treat the races differently, providing favoritism and preferential treatment for Racial Minorities. I.e., what opponents would pejoratively label "reverse discrimination."

The common thread in Ginsburg's voting in these cases would seem to be that constitutional equal protection and civil rights laws do not necessarily mandate race blindness or neutrality, or perfectly equal treatment. Rather, that they primarily mandate the protection of Racial Minorities, the victims of historic discrimination.

That constitutional equal protection and civil rights laws were intended to protect them. To ameliorate their plight. To insure that they are treated as well as the White majority. Not to provide additional ammunition for the White majority against programs and policies intended for the benefit of Racial Minorities.

That common thread that seems pretty clearly to tie together Ginsburg's votes is a far cry from that which characterizes the records of the Republican Justices. Not only Scalia and Thomas, but Roberts and Kennedy as well.

Next in this series: Justice Breyer, the other Clinton appointee.