Before disclosing my own hypothetical voting, perhaps it makes sense to offer a quick recap. And we'll update the figures to include the recent decision in Schuette v. Coalition to Defend Affirmative Action, where the divided Court upheld a Michigan law prohibiting racial preferences in college admissions. So the updated summary now, and next post we'll do my full disclosure.

For this recap, let's reorganize the graphs a bit. They've probably become a bit too cluttered. Also, let's update the data thru May 2014. The figures and graphs will now reflect all the Court's decisions involving issues of racial discrimination, from the time John Roberts became Chief Justice in September 2005 to the present day. [The pool of cases is further described at the end of this post.]

So here is a summary of the Court's decisional record and the Justices' voting. We'll begin with those cases brought by White complainants--whether they were claiming to be victims of racial discrimination, or objecting to racial preferences for Minorities, or otherwise arguing that some race conscious or remedial policy adversely affects them. 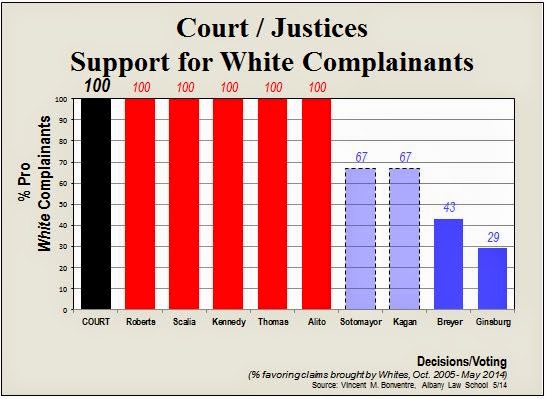 There it is. The Court itself, as well as all 5 Republican Justices, supported every complaint about racial discrimination brought by Whites. The Democratic Justices voted to uphold the White complaints much less frequently. [N.B., the newest Justices, Sonia Sotomayor and Elena Kagan, participated in only a small number of these cases, so the figures for them may well be misleading.]

Let's contrast that with the Court's and Justices' records in cases where those complaining were Racial Minorities.
GRAPH 2 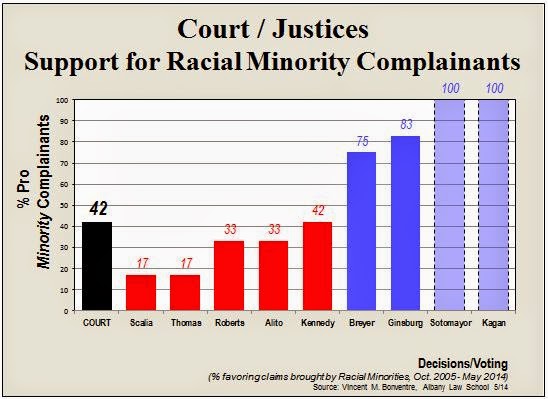 The Court itself sided with Racial Minority complainants in less than half the cases they brought. Chief Justice Roberts and Justice Alito did so less frequently than that. Justices Scalia and Thomas hardly ever did. On the other hand, all 4 Democratic Justices voted to uphold the complaints brought by Racial Minorities most of the time. And the newest Justices did so in each one of the few cases in which they participated.

If we narrow our focus to those closer cases resulting in divided decisions, as we've seen previously in this series, the contrasts are even sharper.
GRAPH 3 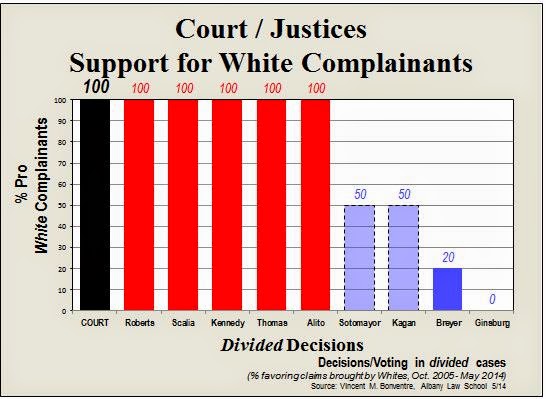 The Court as a whole and the 5 Republican Justices sided with the White complainants in every case they brought--whether the ultimate decision was unanimous or not. But as underscored in graph 3, Democratic Justices Ginsburg and Breyer rarely did so in the closer, divided cases. [Again, N.B., the newest Justices, Sonia Sotomayor and Elena Kagan, participated in only a small number of these cases, so their figures may well be misleading.]

The records are reversed where Racial Minorities were the ones complaining.
GRAPH 4 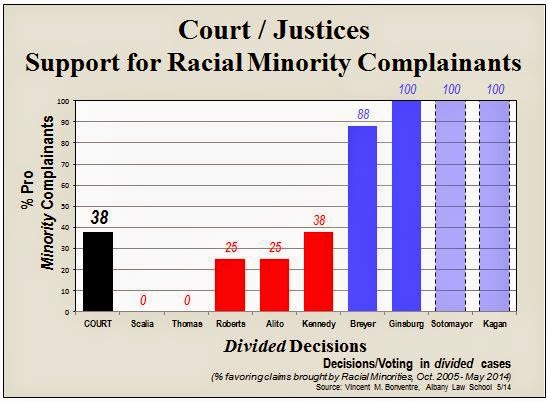 As seen in graph 4, the Court's decisions usually rejected complaints brought by Racial Minorities--especially in the closer, divided cases. The same is true for every one of the 5 Republican Justices.

Indeed, Justice Kennedy's record is the same as the Court's. Roberts and Alito rarely sided with the Racial Minority complainants in these cases. Scalia and Thomas never did. On the other side of the judicial aisle, virtually every single vote cast by the 4 Democratic Justices agreed with the complaints brought by Racial Minorities.

What about equal protection? In the sense of strict, simple, straight equal protection that we've meant in this series. That is, no discrimination, no preferences, no unequal treatment. Prohibiting disparate treatment on the basis of race. Enforcing measures to insure the same opportunity, same rights, same benefits. Here's the recap.
GRAPH 5 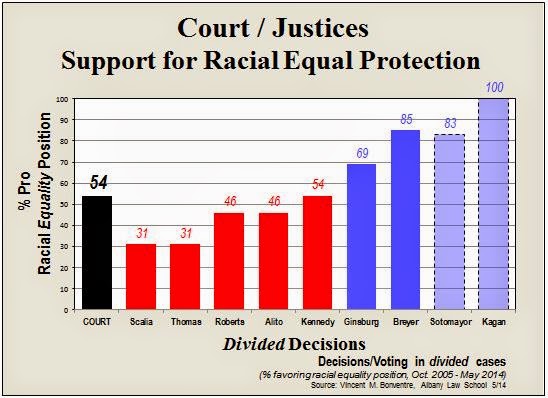 Interestingly, the record for the Court as a whole is about half and half. That is, in only about half the cases did the Court side with the position intended to insure equal--not preferential--opportunity, rights, benefits, etc. Whether in employment, education, voting, or anything else. The protection of actual equal treatment.

Among the 5 Republican Justices, Kennedy's record is the same as the Court's. Roberts and Alito sided with the equal protection position less frequently. Scalia and Thomas sided with it the least often.

The Democratic Justices supported the equal protection position in more of the cases. Their voting records reflect their stronger support for anti-discrimination and voting rights laws, as well as their less strong support for business and states rights.

Even more telling, however, are the Court's and Justices' records for protecting--not equality per se--but Racial Minorities. That is, the degree of support for positions, programs, policies, and anything else intended to protect the rights, benefits, and opportunities of Racial Minorities. Here's the recap of that.
GRAPH 6 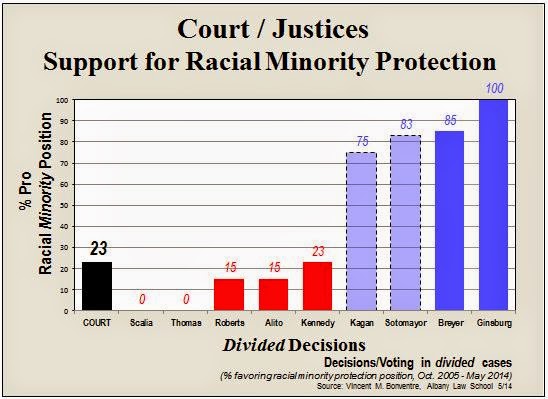 If the Constitution's guarantee of equal protection and the civil rights laws were intended to protect the historically oppressed and mistreated minorities, then the record of the current Supreme Court is most curious--at best. The Court has actually supported the interests of Racial Minorities very infrequently.

Let's be clear what this means. In the overwhelming number of cases, this Court has applied constitutional equal protection and the civil rights laws to oppose the interests of Racial Minorities. Yes, most curious and ironic at best.

As we've come to expect with this current Court, the partisan division among the Justices could hardly be more stark. That's just fact.

Turning from fact to conceded opinion, I make no bones that I find the Court's record--and that of some of the more conservative Republican Justices--to be appalling. Particularly the extent to which the Court, and those Justices, have turned constitutional equal protection and the civil rights laws on their heads. Those constitutional and legal provisions have been diluted and, worse, construed as weapons to be used against the interests of Racial Minorities that they were intended--and needed--to protect.

Well, that's a fair enough segue into the next post in this series when I will disclose my own hypothetical voting record and place it alongside that of the Court and the Justices.


[Regarding the pool of cases on which this study is based, as noted at the outset of this series and now updated:
The Roberts Court has decided a wide variety of cases involving issues of racial discrimination. These have included issues dealing with such matters as voting rights, affirmative action in education and employment, race-based gerrymandering, race-based promotions and terminations, race-based jury selection, retaliation against discrimination complainants, etc.
There have been 19 such cases as of the end of May 2014. Keep in mind that all of these cases went through other federal or state courts before reaching the Supreme Court which considered them important for the nation.
Among these cases were those which not only made their way to the Supreme Court, but were so close and contentious that the Justices could not agree. There were dissenting opinions. Of the total 19 cases, 13 were these closest and most contentious of cases resulting in such divided decisions.]