Purely in the interest of full disclosure.

No particular significance to how I would have voted in these cases. But just to see what my biases might be. As I put in in an earlier post:


I've previously noted my agreement with Justice William O. Douglas's view that legal analysts and commentators ought to disclose their predilections. At least from time to time. In this way, the reader or listener has a better idea of the possible biases that might be influencing what is being presented. (See William O. Douglas, Law Reviews and Full Disclosure, 40 Wash. L. Rev. 227 [1965]. And see, e.g., a recent post on New York Court Watcher: Supreme Court: Highlights...(Disclosure--How I Would Have Voted in the Free Speech Values Cases), Oct. 29, 2010.)
Also, readers of this blog seem to respond to the "disclosure" posts more than any others--those and the post-season "Saratoga Highlights" posts. And, yes, like the "Saratoga Highlights," I have fun doing the "Disclosures." Self-therapy? [From Supreme Court: Highlights...(Part 15--Full Disclosure in Pics: How I Would Have Voted ).]

So without further delay, here goes. My hypothetical record on complaints brought by Whites raising issues of racial discrimination: 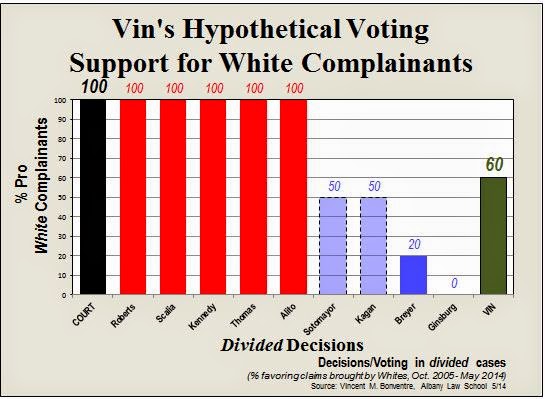 I would definitely not have voted, as did every Republican Justice, to support every complaint brought by Whites in the close, non-unanimous cases. But I would have voted that way more frequently than the Democrats on the Court.
[E.g., I would have voted with the White complainants--and the Republican Justices in the majority--in Ricci v. DeStefano, where White firefighters in New Haven who performed well on an exam were nevertheless denied promotion in favor of Black firefighters who did less well. That exam was supposed to be the basis for promotion, and it had been pre-approved as being non-discriminatory. The treatment of those firefighters who did well on the exam seemed blatantly unfair.]

What about complaints by Racial Minorities?
GRAPH 2 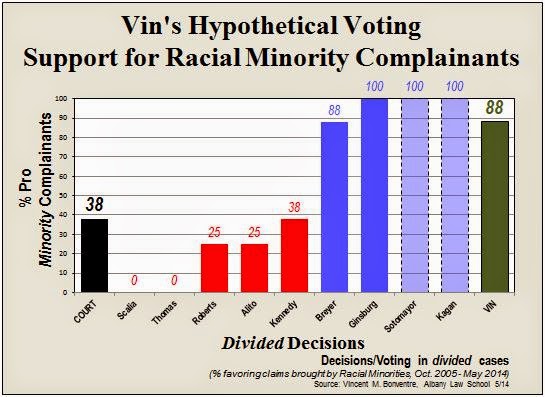 In most of the cases commenced by Racial Minorities complaining about some matter of racial discrimination, I would have sided with them. So I would usually have cast my vote with the Democratic Justices, and rarely with the Republicans.
[E.g., in University of Texas SW Med Cntr v. Nassar, I would have voted withe the Democratic Justices in dissent in support of the employee who claimed retaliation for complaining about racial discrimination. I would uphold such complaints as long as retaliation was a significant reason for the adverse treatment--as opposed to being the specifically definitive "but for" reason, which is what the Republican Justices voted to require before such a claim could be sustained. In League of United Latin American Citizens v. Perry, I would also have voted with the Democratic Justices, this time in the majority with Justice Kennedy, to uphold the Racial Minority complaint against the redistricting in Texas which deliberately diluted Latino voting strength for partisan Republican advantage.]

What about strict racial equal treatment--again, no discrimination or preferences?
GRAPH 3 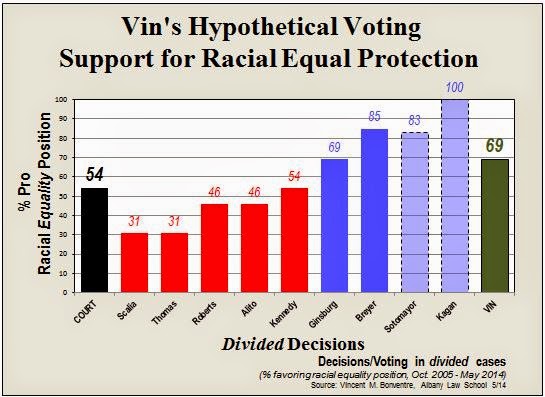 My hypothetical voting would have been more pro-equal treatment than that of the Republican Justices. But it would not be a record of strict equality, because I do support racial preferences in some circumstances. Hence, although I would not have voted with Justice Ginsburg in every case, my overall record on equal treatment would have been similar to hers.
[E.g., in Schuette v. Coalition to Defend Affirmative Action, I would have voted in dissent with Justices Sotomayor and Ginsburg against the proposition, passed by the Michigan voters, that prohibits all racial preferences in college admissions in that state. In my view, this was a hateful proposition that targeted only policies beneficial to racial minorities (and women), who just happen to be the victims of historic oppression and discrimination. Despite the proposition's surface impression as favoring "merit," in fact it does absolutely nothing to advance merit in college admissions. It does nothing to eliminate all sorts of non-merit preferences--geography, athletic, wealth, legacy, etc.. Only race (and gender), for which there are compelling remedial and diversity purposes, was eliminated from consideration.]

Finally, not equal protection per se, but minority protection.
GRAPH 4 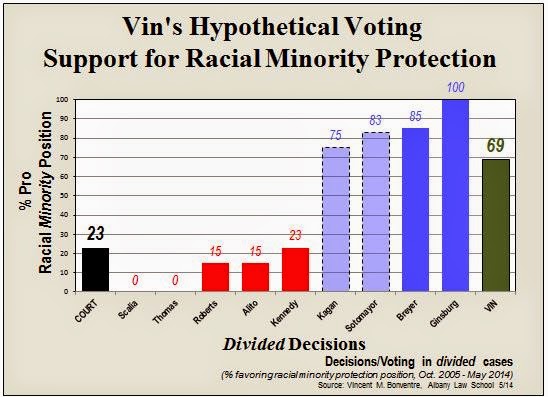 On the other hand, my hypothetical voting is somewhat less supportive than the records of the Democratic Justices. I would have voted for the position favorable to Racial Minorities in most of the cases involving issues of racial discrimination, but I would have voted the other way--with the Republican Justices--some of the time.
[E.g., As noted above, I would not have voted in favor of minority interests in the Ricci case involving the firefighter promotions. Also, I would have voted with the Republican Justice majority in Shelby County v. Holder to invalidate the pre-clearance provision of the Voting Rights Act. If the federal government is going to require some states and their sub-divisions to submit their laws for pre-approval, then it ought to have updated criteria for determining which states and sub-divisions must do so, as opposed to relying on outmoded, several decades-old data, which is exactly what the federal government has been doing.
On the other hand, I would have voted with the Democratic Justices in Bartlett v. Strickland, as well as in the Latin American Citizens case mentioned above, to support a strict enforcement of those provisions of the Voting Rights Act mandating that any redistricting not dilute minority voting strength.
I would have voted with the 7 Justice majority in Fisher v. University of Texas to require strict scrutiny of racial preferences in college admissions. Racial affirmative action is problematic because preferences for some often mean discrimination against others, and because race is often a crude proxy for who's disadvantaged, underprivileged, and needing of assistance.
And yet, affirmative action is sometimes critical to redress past discrimination and to enhance educational diversity. Hence, as noted previously, I would have voted in dissent with Justices Sotomayor and Ginsburg to strike the Michigan law prohibiting all racial preferences--especially because the law (invidiously, in my view) eliminated only racial (and gender) preferences, but left a myriad of other non-merit preferences untouched.]

Well there it is. Apparently, on issues involving racial discrimination, I'm more ideologically liberal than the Republican Justices--considerably more so than the most conservative ones: Scalia, Thomas, Roberts, and Alito. On the other hand, I'm evidently a bit less ideologically liberal than some of the Democratic Justices on some of the issues.

Of course, many of these cases are very close. Who really knows within the dynamics of the Court how one's voting might be affected by alliances and other personal, policy and judicial considerations.

It is certainly much easier to opine how I would have voted in the vacuum of my own musings. Perhaps, if I were actually on the Court, confronting all the forces and influences that the Justices do, my own voting would be as partisan and ideologically lopsided as the Justices themselves.