We saw in the last post that the early DiFiore Court has compiled a record in criminal cases that is somewhat pro-prosecution. More specifically, in the first half-year of criminal appeals since Janet DiFiore has presided over New York's highest court as Chief Judge, the Court rendered decisions more favorable to the prosecution in 65% of those close, divided cases. Stated otherwise, the majority of the Judges voted for the more pro-prosecution position in nearly twice as many of those cases as it supported the position more favorable to the accused.

We also saw that in those divided criminal cases in which only one Judge dissented, most of the time it was Judge Jenny Rivera who had authored the lone dissenting opinion. Moreover, she sided with the accused in each of her sole dissents.

Let's now take another look at how frequently Rivera and her colleagues have been dissenting, whether in criminal or civil appeals. We did that earlier in this series. (See Part 1.) Here's that same data, just a bit reorganized and highlighted in the following graph: 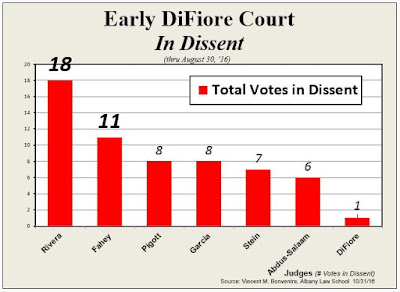 As reflected again in this graph, Judge Rivera--the sole pro-accused dissenter in most of the single dissent cases--has been the Court's most frequent dissenter. And again, by a wide margin.

Not surprisingly then, her record has been the most pro-accused of the Judges--once again, by a wide margin. Here's a reorganization of some data we've seen before to help with our present focus: 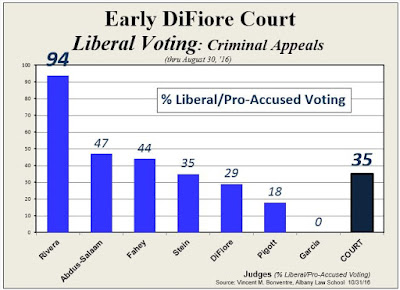 Of course, it might be argued that Judge Rivera's record is extreme, that her tendencies lean so far in favor of the rights of the accused, that her votes skew the data. (To be sure, Judge Rivera's record evinces unmistakable leanings toward vigorous protection of the rights of the accused. But a fair reading of her opinions hardly suggests extreme positions.) However, her pro-accused record is more than counterbalanced by that of two of her colleagues, Judges Michael Garcia and Eugene Pigott, at the other end of the Court's spectrum--i.e., 0% and 18% pro-accused, respectively. 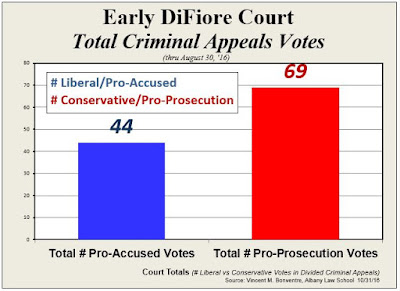 As the graph shows, the data is pretty clear. The total votes cast by the Judges in these divided criminal cases add up to a more conservative, pro-prosecution record--just what we've been seeing with other data. Whether looking at the data for Court decisions, for individual Judge's voting, or for cumulative votes, it's hard to escape the fact that the Court as a whole has been at least somewhat conservative in deciding criminal cases.

What about the non-criminal cases?

Let's start just as we did with the criminal decisions. Look again at the data on dissents. During this period, Judge Rivera was followed by Judge Eugene Fahey as the Court's most frequent dissenter. In criminal appeals, his record was half as pro-accused as Judge Rivera's, but it was still on the more pro-accused side of the Court. As for the civil cases, take a look: 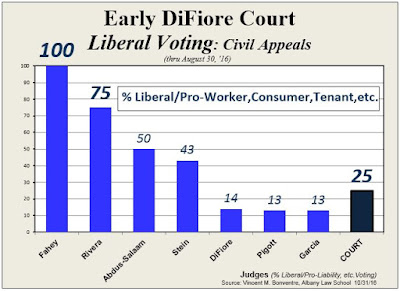 As the graph shows, Judges Fahey and Rivera--the Court's two most frequent dissenters--have the Court's most liberal records in the civil cases. More than that, their records are several times more pro-worker, consumer, tenant, etc. than 3 members of the Court (Chief Judge DiFiore and Judges Pigott and Garcia), and at least 3 times that of the Court as a whole.

As we did with the records in criminal cases, let's look at the cumulative number of votes cast by the Judges in the divided civil cases: 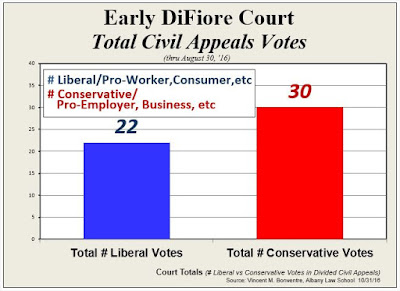 As in the criminal cases, the cumulative votes in the civil cases confirm the Court's overall conservative bent. (The Court's mere 25% liberal decisional record reflected in the previous graph might seem at odds with this closer 22 versus 30 cumulative vote total. But much of the seeming discrepancy is attributable to the bare 1 vote conservative majorities in the several 4-3 civil decisions. See Part 3.)

So, whether we look at the data from the criminal cases where the Court's record leans pro-prosecution, or from the civil cases where it leans somewhat more strongly pro-employer, business, tenant, etc., the early DiFiore Court's overall record is generally conservative. Not lopsidedly so. Indeed, it would be absurd to label this a right-wing Court. But if one had to choose between its being more liberal or more conservative, the latter would seem more accurate.

To conclude, let's add the cumulative criminal case and civil case votes. Here it is: 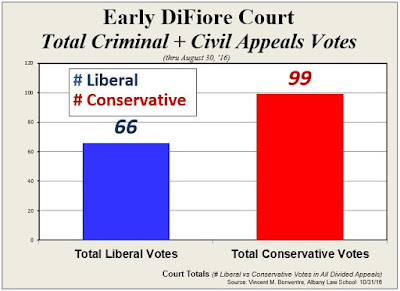 Sooooo, this is the record of the early DiFiore Court. The votes and the resulting decisions have generally been conservative.
[To those who are wondering: yes, in future posts I will be updating all that we've been discussing to include what the Court does in the remaining months of the first year of the DiFiore Court.)

One final point. Lest any of the foregoing be misconstrued, the observations here are not about the Court's being right or wrong, wise or foolish, or the same or different than I would have preferred. The observations are simply what the data can reveal, which is that the Court's record has been more conservative than liberal.
[Disclosure: I would have been somewhat more liberal, especially in the civil cases.]